Othniel Charles Marsh (October 29, 1831 – March 18, 1899) was an American paleontologist. Marsh was one of the preeminent scientists in the field; the discovery or description of dozens of new species and theories on the origins of birds are among his legacies.

Born into a modest family, Marsh was able to afford higher education thanks to the generosity of his wealthy uncle George Peabody. After graduating from Yale College in 1860 he traveled the world, studying anatomy, mineralogy and geology. He obtained a teaching position at Yale upon his return. From the 1870s to 1890s he competed with rival paleontologist Edward Drinker Cope in a period of frenzied Western American expeditions known as the Bone Wars.

A comprehensive personal and scientific biography of Professor Marsh, written for the National Academy of Sciences by the American paleontologist Charles Schuchert is available on the NAS website.[1]

Marsh was born in Lockport, New York, United States, 1831,to a family of modest means. However, he was the nephew of the very wealthy banker and philanthropist, George Peabody. He graduated from Phillips Academy, Andover in 1856 and Yale College in 1860.[2] He then studied geology and mineralogy at Yale's Sheffield Scientific School (1860-1862), and afterwards paleontology and anatomy in Berlin, Heidelberg and Breslau (1862-1865).[3] He returned to the United States in 1866 and was appointed professor of vertebrate paleontology at Yale University. He persuaded his uncle George Peabody to establish the Peabody Museum of Natural History at Yale. 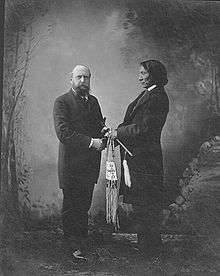 Marsh and his many fossil hunters were able to uncover about 500 new species of fossil animals, which were all named later by Marsh himself. In May 1871, Marsh uncovered the first pterosaur fossils found in America. He also found early horses, flying reptiles, Cretaceous and Jurassic dinosaurs such as Triceratops, Stegosaurus, Apatosaurus and Allosaurus, and described the toothed birds of the Cretaceous Ichthyornis and Hesperornis.

Marsh is also known for the so-called "Bone Wars" waged against Edward Drinker Cope. The two men were fiercely competitive, discovering and documenting more than 120 new species of dinosaur between them.

In the winter of 1863, Marsh met Cope while in Berlin. Marsh, age thirty-two, was attending the University of Berlin. He held two university degrees in comparison to Cope's lack of formal schooling past sixteen, but Cope had written 37 scientific papers in comparison to Marsh's two published works. While they would later become rivals, on meeting the two men appeared to take a liking to each other. Marsh led Cope on a tour of the city, and they stayed together for days. After Cope left Berlin the two maintained correspondence, exchanging manuscripts, fossils, and photographs. However, as time went on the two developed a rivalry which went on throughout their lives. The rivalry may have started when Marsh said Cope placed the skull of a marine reptile on the wrong end, the tail. Marsh eventually "won" the Bone Wars by finding 80 new species of dinosaur, while Cope found 56. Cope did not take this lightly, and the two fought within scientific journals for many years to come, rumored to be at the expense of recognized scientific method.

Thanks to John Wesley Powell, head of the U.S. Geological Survey, and Marsh's contacts in Washington, Marsh was placed at the head of the consolidated government survey in the late 1880s.[4]

Marsh died on March 18, 1899, a few years after his great rival Cope.[2] He was interred at the Grove Street Cemetery in New Haven, Connecticut. 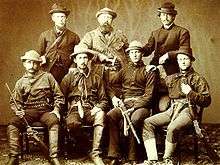 Othniel Marsh (center, back row) and assistants ready for digging.

Marsh's finds formed the original core of the collection of Yale's Peabody Museum of Natural History. The museum's Great Hall is dominated by the first fossil skeleton of Brontosaurus that he discovered, which was reclassified as Apatosaurus for a time. However, an extensive study published in 2015 concluded that Brontosaurus was a valid genus of sauropod distinct from Apatosaurus.[6][7][8]

He donated his home in New Haven, Connecticut, to Yale University in 1899. The Othniel C. Marsh House, now known as Marsh Hall, is designated a National Historic Landmark. The grounds are now known as the Marsh Botanical Garden.

Marsh was elected a member of the American Antiquarian Society in 1877.[9]