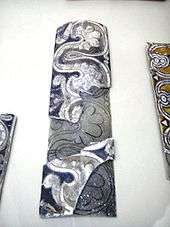 Fragments found at the site of the Palace Basilica

The Palace Basilica is a ruined basilica that was brought to light in the 1937 excavations at the Second Courtyard of Topkapı Palace in Istanbul, Turkey. Since the name of the church cannot be found, the remains have been named after the location of Topkapı Palace. The basilica was probably constructed around the 5th century CE, and it underwent repairs between the 10th–12th century.

The church with three naves measured 35x21 metres. The external facade of the apse is three-sided: the inner facade is semicircular. The entrance to the atrium is on the north side.