Saint Mary of Blachernae (full name in Greek: Θεοτόκος των Βλαχερνών (pr. Theotókos ton Vlachernón); Turkish name: Meryem Ana Kilisesi) is an Eastern Orthodox church in Istanbul. The little edifice, built in 1867, got the same dedication as the shrine erected in this place in the fifth century which, until its destruction in 1434, was one of the most important sanctuaries of Greek Orthodoxy.[1]

The church is located in Istanbul, in the district of Fatih, in the neighbourhood of Ayvansaray, along Mustafa Paşa Bostanı Sokak. It lies a few hundred meters inside the walled city, at a short distance from the shore of the Golden Horn. The building is protected by a high wall, and preceded by a garden.

In 450, Empress Aelia Pulcheria started to build a church near a fountain of holy water (Greek: Ayíasma) situated outside the walls of Theodosius II at the foot of the sixth hill of Constantinople. After her death in 453, the shrine was completed by her husband, Emperor Marcian.[2]

Emperor Leo I erected near the church two other buildings: a parekklesion,[3] named Ayía Sorós ("holy reliquary"), since it hosted the holy mantle and robe of the Virgin brought from Palestine in 473, and the ´Ayion Loúsma ("sacred bath") edifice, which enclosed the fountain.[2]

The importance assumed by the whole complex encouraged the Emperors to lodge in the surroundings and to build there the nucleus of what would in later centuries become the imperial palace of Blachernae.[4] During the first quarter of the 6th century, Emperors Justin I and Justinian I restored and enlarged the church.[2] The name of Blachernae may come from old name of Romanians (Vlach, Blac, etc.) and from a small colony of vlachs[5]

Saint Mary hosted a famous icon of the Virgin, named after the church Vlachernítissa. It was painted on wood and revetted with gold and silver. This icon and the relics of the Virgin kept in the parekklesion were considered by the Byzantines as most powerful talismans, useful during a war or in case of natural disasters. The first proof of the power of these objects came in 626. During that year Constantinople was besieged by the combined armies of the Avars and the Persians, while Emperor Heraclius was away, fighting the Persians in Mesopotamia. The son of the Emperor, Constantine, together with Patriarch Sergius and Patrician Bonus carried in procession along the ramparts the icon of the Blachernitissa. Some time later the fleet of the Avars was destroyed.[6] The Khan of the Avars afterwards said that he had been frightened by the vision of a young woman adorned with jewels scouring the walls.[6]

After the end of the siege, the Byzantines learned with joy that the building of the church, which at that time lay outside the Walls, was the only one not to have been plundered by the invaders.[6] When the victorious Heraclius came back to Constantinople, bringing back the True Cross which had been captured by the Persians in Jerusalem, the Patriarch received him at Saint Mary. Sometime later, the Emperor built a single wall to protect the church, thus enclosing in the City the suburb of Blachernae.[4] 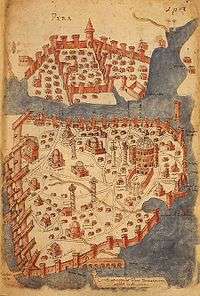 Map of Constantinople around 1420, after Cristoforo Buondelmonti. The District of Blachernae can be seen on the center left part of the map, surrounded on two sides by the walls of the City, below the Golden Horn.

The protection of the Virgin of the Blachernae was also credited with the Byzantine victories during the Arab siege of 717-718, and in 860, during the invasion of the Rus'. In this occasion, the Veil of the Virgin (mafórion), which by that time had joined the other relics in the church, was shortly plunged in the sea to invoke the protection of God on the fleet.[7][8] Some days later the Rus' fleet was destroyed. In 926 too, during the war against Simeon of Bulgaria, the potency of the relics of the Virgin helped convince the Bulgarian Tsar to negotiate with the Byzantines instead of assaulting the City.[7]

On August 15, 944, the church received other two important objects: the letter written by King Abgar V of Edessa to Jesus and the Mandylion. Both relics were then moved to the Church of the Virgin of the Pharos.[9]

St. Mary, being a centre of the veneration of the Images, played also an important role in the religious fights of the Byzantines. During the Iconoclastic period, the final session of the Council of Hieria, where the cult of the images was condemned, took place in the church.[7] As a consequence of that decision, Emperor Constantine V ordered the mosaics of the interior destroyed, and substituted them with others representing natural scenes with trees, birds and animals.[10] On that occasion the Icon of the Blachernitissa was also hidden under a layer of silvery mortar.[2] In 843, with the end of Iconoclasm, the Feast of Orthodoxy was celebrated for the first time in the church of Blachernae with an Agrypnía ("holy Vigil"), which occurred on the first Sunday of Lent.[7]

The Blachernitissa was discovered again during restoration works executed during the reign of Romanos III Argyros,[11] and became again one of the most venerated icons of Constantinople. The Church of Saint Mary was completely destroyed during a fire in 1070, and was rebuilt by Romanos IV Diogenes and Michael VII Doukas respecting the old plan.[6]

According to Anna Komnene, the so-called "habitual miracle" (Greek: to synetís thavma) occurred in the church before the Icon of the Virgin Blachernitissa.[12] On Friday after sunset, when the church was empty, the veil which covered the icon moved up slowly, revealing the face of the Virgin, while 24 hours later it fell again slowly. Anyway, the miracle did not occur regularly, and ceased completely after the Latin conquest of the City.[12]

After the Latin invasion of 1204, the church was occupied by the Latin clergy and placed directly under the Holy See. Already before the end of the Latin Empire, John III Doukas Vatatzes redeemed the church and many monasteries for the Orthodox clergy in exchange for money.[9]

On February 29, 1434, some noble children who were hunting pigeons on the roof of the church accidentally started a fire, which destroyed the whole complex and the surrounding quarter.[6] The area was largely neglected during the Ottoman period. In 1867, the Guild of the Orthodox furriers bought the parcel around the holy fountain, and build there a small church.

The religious complex of Blachernae comprised three edifices: The Church of Saint Mary, the Chapel of the reliquary (Ayía Sorós), and the Sacred Bath (´Ayion Loúsma).[12]

The church proper, defined by all the sources as "large" (mégas naós), was of basilica type, with the space divided into three aisles by two colonnades. This plan is similar to that of other churches of the early type in Constantinople like St. John of Stoudios. It had a rectangular plan with sides of 96 m and 36 m.[10] Justinian apparently built a dome on the church, since Procopius, in his work De Edificiis, mentions that both colonnades bent in the middle of the nave describing a semicircle.[2] Emperor Justin II added the two side arms, giving to the plan the appearance of a cross.[13] The reconstruction of 1070 possibly respected this plan. The Spanish ambassador Ruy Gonzáles de Clavijo, who visited Constantinople in 1402, writes that the building was divided into three aisles, with the central higher than the flanking ones. The columns were made of green Jasper, while the capitals and the bases of the columns were gilded and carved in white marble.[10] The church by that time had no dome anymore, but a multicoloured compartmented ceiling, decorated with golden garlands.[10] 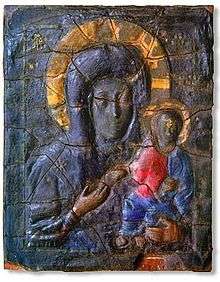 The alleged Vlachernítissa Icon of the Theotokos, kept in Dormition Cathedral in the Moscow Kremlin.

The walls at that time were covered with coloured marble panels, while originally a silvery mortar was used.[12] Near the middle of the nave, there was a silver ambon, while at the end lied a rich iconostasis surrounded by sculptures.[10] On the upper part of the walls, there were mosaics representing the miracles of Christ and several episodes of his life up to his Ascension.[10] To the church belonged also tribunes and an oratory. The shrine communicated through a porticus and a stairway with the imperial Palace of Blachernae, which – lying on the slope of the hill – overlooked it.[14]

On the right of the church lied the parekklísion of the Ayía Sorós, which contained the dress and robe of the Virgin. The veil and a part of her belt (now at Vatopedi monastery on Mount Athos), were later also kept there. The building was round and had a narthex and tribunes.[14] An icon of the Virgin donated by Emperor Leo I and his wife Verina was also worshipped there. On its right was kept the casket – adorned with gold and silver – which contained the relics.[14] They were rescued from the Latin occupation, and after the restoration of the Empire were kept in the church, but were all destroyed during the fire of 1434.[14][15]

The bath where the Emperor immersed himself comprised three parts: the robing room where he undressed, the kólymbos (pool for immersion) and the hall of Saint Photinos. It lay to the right of the parekklesion, and communicated with it through a door.[16] The pool consisted of a large room surmounted by a dome with the basin in the middle. It was adorned with icons, and the water poured in the basin from the hands of a marble statue of the Virgin. An Image of Saint Photinos decorated the centre of the dome.[16] Each year, on August 15 (the feast of Dormition), after the adoration of the Mafórion (holy veil) of the Virgin, the Emperor plunged three times in the sacred pool.[16]

The small church which today encloses the Hagiasma has a trapezoidal plan with sloping roof, and is adorned with icons and frescoes. It is oriented in northwest-southeast direction. The holy fountain, which is believed to have healing powers, is always a favourite destination for Orthodox and Muslim pilgrims, who pour in the pool coins and hair pins.[16] The pilgrim can also ritually wash his eyes at a line of faucets.[17] Above them a modern palindrome inscription says: "Nípson anomímata mi mónan ópsin" (Greek: "Wash the sins not only the eyes").[17] The water falls into an underground gallery, which according to a tradition links the Hagiasma with that in Balıklı.[17] The church is run by an episkopos and two papades.[18] Each Friday morning the Akathist Hymn, composed by Patriarch Sergius during the Siege of 626, is sung there.[17] Since the nearby area is not urbanized, it would be possible to explore it in order to understand more about the ancient complex.