Gül Mosque (Turkish: Gül Camii, meaning: "The Mosque of the Rose" in English) is a former Eastern Orthodox church in Istanbul, Turkey, converted into a mosque by the Ottomans.

The building is located in Istanbul, in the district of Fatih, in the neighborhood of Ayakapı ("Gate of the Saint"), along Vakıf Mektebi Sokak. It lies at the end of the valley which divides the fourth and the fifth hills of Constantinople, and from its imposing position it overlooks the Golden Horn.[1] 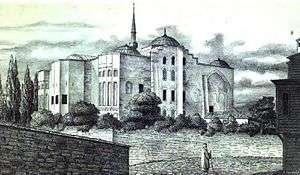 The mosque in a drawing of 1877, from A.G. Paspates' Byzantine topographical studies

It is one of the most important religious Byzantine buildings of Constantinople still extant, but its dedication and the date of its construction, which for long time appeared certain, are now disputed by scholars. It is either identified with the church belonging to the nunnery of Saint Theodosia (Greek: Μονή τής Άγιας Θεοδοσίας εν τοις Δεξιοκράτους, Monē tis Hagias Theodosias en tois Dexiokratous) or with that of the monastery of Christ the Benefactor (Greek: Μονή του Χριστού του Ευεργέτου, Monē tou Christou tou Euergetou).[2]

Problem of the dedication

The building, since Stephan Gerlach visited it in the late 15th century, has always been identified with the church of Hagia Theodosia en tois Dexiokratous. At the beginning of last century, Jules Pargoire identified the building as the church of Hagia Euphēmia en tō Petriō, built during the reign of Basil I (867–886), and brilliantly explained the change in its dedication. The German archaeologist Hartmut Schäfer, after studies performed in the 1960s on the dating of the basement, estimated the date of construction of the edifice between the end of the eleventh and the first half of 12th century, placing it in the Komnenian period, and identifying it hypothetically as the church of the monastery of Christos Euergetēs.[3][4] He excludes the possibility that the Gül Mosque is the building where the body of Hagia Theodosia was brought after the end of the Iconoclasm period.[5] On the other hand, he does not exclude the possibility that the building could have been dedicated to Hagia Theodosia in a later period.[6] 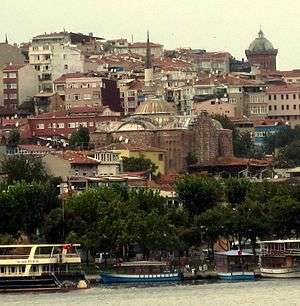 The mosque seen from Atatürk Bridge on the Golden Horn. In the background, the Fener quarter with the dome of the Megali tou Gènous scholè, the largest Rûm (Greek) school in Istanbul

On January 19, 729, at the very beginning of the iconoclastic persecutions, Emperor Leo III the Isaurian ordered the removal of an image of Christ which stood over the Chalkē, the main gate of the Great Palace of Constantinople.[7][8] While an officer was executing the order, a group of women gathered to prevent the operation, and one of them, a nun named Theodosia, let him fall from the ladder. The man died, and Theodosia was captured and executed.[9]

After the end of the Iconoclasm, Theodosia was recognized as a martyr and saint, and her body was kept and worshiped in the church of Hagia Euphemia en tō Petriō, in the quarter named Dexiokratiana, after the houses owned here by one Dexiokrates.[10] The church and adjoining monastery were erected by Emperor Basil I at the end of the ninth century. The monastery hosted his four daughters, who were all buried in the church. Hagia Euphemia lay near the Monastery of Christos Euergetēs, whose foundation date is unknown. It is only known that it was restored by protosebastos John Komnenos, son of Andronikos I Komnenos and brother of co-emperor John, who died fighting in the battle of Myriokephalon in 1176.[3] On April 12, 1204, during the Fourth Crusade, the Latin fleet gathered in front of the monastery of the Euergetes before attacking the city.[3] During the Latin Empire, the navy had its anchorage in front of the monastery, and the naval port was kept there by Michael VIII Palaiologos also after the restoration of the Byzantine Empire. Many sacred relics kept in the church were looted by the Crusaders and many still exist in churches throughout western Europe.[3]

Hagia Theodosia became one among the most venerated saints in Constantinople, being invoked particularly by the infirm. The fame of the saint was increased by the recovery of a deaf-mute in 1306.[10] The church is often mentioned by the Russian pilgrims who visited the city in the fourteenth and early fifteenth century, but sometimes it is confounded with Christ Euergetēs, which, as already said, stood near it.[11] Twice a week a procession took place in the nearby roads. In that occasion the relics hosted in the church were carried along, followed by a great crowd of sick people praying for their recovery. 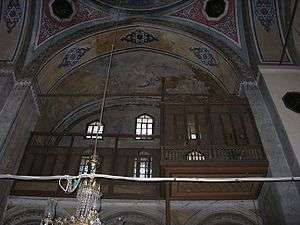 The southwest gallery with the wooden Sultan lodge.

The church is mentioned for the last time on May 28, 1453. On that day, which was the eve both of the Saint's feast and also of the end of the Byzantine Empire, the Emperor Constantine XI with the Patriarch went to pray into the church, which was adorned with garlands of roses. Afterward Constantine left for the last struggle.[7] Many people remained all the night in the church, praying for the salvation of the city. On the morning the Ottoman troops, after entering the city, reached the building, still adorned with flowers, and captured all the people gathered inside, considering them as prisoners of war.[12] The relics were thrown away and the body of the Saint was cast to the dogs.[13]

After the Ottoman conquest, the basement of the edifice, which in the meantime had fallen to ruin,[14] was used as naval dockyard. Close to the building, Seyhülislam Molla Hüsrev Mehmet Effendi (died 1480) established a vakıf (foundation) and erected a small mosque (Küçük Mustafa Paşa Mescidi) and a bath (Küçük Mustafa Paşa Hamamı), which still exists.[15]

Some years later (in 1490), the ruined church was repaired and converted into a mosque.[15] A minaret was erected between 1566 and 1574, under Selim II,[15] by Hassam Pasha, a supplier of the Ottoman navy. Afterwards the mosque was often named after him.[16] Between 1573 and 1578, during his sojourn in Istanbul, the German preacher Stephan Gerlach visited the mosque, identifying it with the church of Hagia Theodosia. During that century the mosque saw the predication of the local holy man Gül Baba, which was allegedly buried in the building.[17] It is also possible that the mosque was named after him.

During the 17th and 18th centuries, the edifice was heavily damaged in its upper parts by earthquakes, until Sultan Murad IV restored it, rebuilding the dome with the pendentives, almost the whole west side, the vaults at the southwest and northwest corners, and the minaret.[18]

The building escaped the great fire which ravaged the quarter in 1782, and was restored again by Sultan Mahmud II (1808–1839), who added the wooden Sultan's lodge.[18] 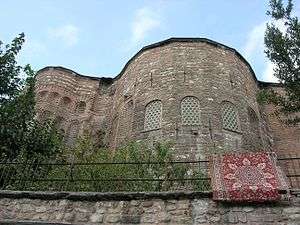 Detail of the apses as viewed from southeast. The difference in masonry between the surviving Byzantine parts (low) and the later Ottoman additions (high) can be easily noticed.

The building lies on a high vaulted basement, which was used also during the Byzantine period only for secular purposes. The masonry of the basement has been built adopting the technique of the "recessed brick", typical of the Byzantine architecture of the middle period. In this technique, alternate courses of bricks are mounted behind the line of the wall, and are plunged in a mortar bed. Due to that, the thickness of the mortar layers is about three times greater than that of the brick layers.[19]

The building has a cross-in-square plan, which is oriented northwest – southeast. It is 26 metres (85 feet) long and 20 metres (66 feet) wide, and is surmounted by five domes, one above the central nave and four smaller placed on the four corners.[20] The central dome, which has a low external drum and has no windows, is Ottoman, as are the broad pointed arches which carry it.

The original dome, akin to that of Kalenderhane Mosque, should have been carried by a tall drum pierced by windows.[21] The exterior of the building is quite imposing. On the southeastern façade, the central apse, with seven sides, and the lateral ones, with three sides, project boldly outside. The central apse appears to be a later Byzantine reconstruction, since it lacks the four tiers of five niches, which feature ornamental brickwork and adorn the lateral ones.[20] Above the niches runs a cornice.

The style of the side apses resembles strongly that of those of Pantokrator Church, and is a further element in favour of a late dating of the building. 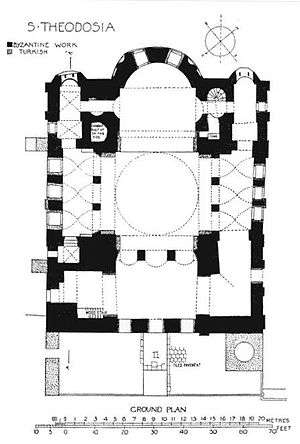 Plan of the ground floor of the mosque, after Van Millingen, Byzantine Churches of Constantinople (1912)

The interior of the building was plastered and decorated in the 18th century. One enters through a wooden porch, which leads to a low narthex surmounted by a barrel vault. From there a triple arcade leads into the tall nave, which is flanked by galleries forming the side arms of the cross. They rest on a triple arcade supported by square piers. The nave ends with the main apse, which is flanked by two smaller ones. The south-east orientation of the main apse allowed the erection of the mihrab inside it.

Each gallery ends with a small chapel, which lies respectively above the prothesis and diaconicon. Both chapels are surmounted by hemispherical domes which are built directly above the pendentives.[20] Light enters in the building through five orders of windows, three belonging to the galleries. Some of the windows are Ottoman.

Carved inside each of the two eastern dome piers there is a small chamber. The south east chamber contains the alleged tomb of the Ottoman Saint Gül Baba. Above the entrance there is the following inscription in Ottoman Turkish: "Tomb of the Apostle, disciple of Jesus. Peace with him", which bears witness to the religious syncretism in sixteenth-century Istanbul.[22] The chamber was originally possibly the tomb of St Theodosia. A tradition that one of the piers hides the burial place of the last Byzantine Emperor was born in the nineteenth century, and is groundless.[18]

Together with Eski Imaret and Vefa Kilise Mosques, it is one of the most important cross-in-square churches in Istanbul.[23]