The Royal Palace of Caserta (Italian: Reggia di Caserta [ˈrɛddʒa di kaˈzɛrta; kaˈsɛrta]) is a former royal residence in Caserta, southern Italy, constructed for the Bourbon kings of Naples. It is one of the largest palaces erected in Europe during the 18th century. In 1997, the palace was designated a UNESCO World Heritage Site; its nomination described it as "the swan song of the spectacular art of the Baroque, from which it adopted all the features needed to create the illusions of multidirectional space".[1] In terms of volume, the Royal Palace of Caserta is the largest royal residence in the world[2] with over 2 million m³[3] and covering an area of about 235,000 m² .[4]

The construction of the palace was begun in 1752 for Charles VII of Naples, who worked closely with his architect, Luigi Vanvitelli. When Charles saw Vanvitelli's grandly scaled model for Caserta, it filled him with emotion "fit to tear his heart from his breast". In the end, he never slept a night at the Reggia, as he abdicated in 1759 to become King of Spain, and the project was carried to only partial completion for his third son and successor, Ferdinand IV of Naples.

The political and social model for Vanvitelli's palace was Versailles, which, though strikingly different in its variety and disposition, solves similar problems of assembling and providing for king, court and government in a massive building with the social structure of a small city, confronting a baroque view of a highly subordinated nature, la nature forcée.[5] The population of Caserta Vecchia was moved 10 kilometers to provide a work force closer to the palace. A silk manufactory at San Leucio resort was disguised as a pavilion in the immense parkland.

Another of the king's primary objects was to have a magnificent new royal court and administrative center for the kingdom in a location protected from sea attack, and distant from the revolt-prone and congested city of Naples. To provide the king with suitable protection, troop barracks were housed within the palace.

The Royal Palace of Madrid, where Charles had grown up, which had been devised by Filippo Juvarra for Charles' father, Philip V of Spain, and Charlottenburg Palace provided models. A spacious octagonal vestibule seems to have been inspired by Basilica di Santa Maria della Salute in Venice, while the palatine chapel is most often compared to the Royal Chapel at Versailles. Vanvitelli died in 1773: the construction was continued by his son Carlo and then by other architects; but the elder Vanvitelli's original project, which included a vast pair of frontal wings similar to Bernini's wings at St. Peter's, was never finished. 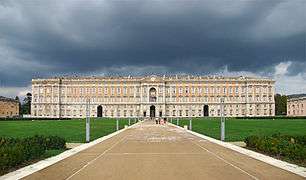 Main façade of the palace. 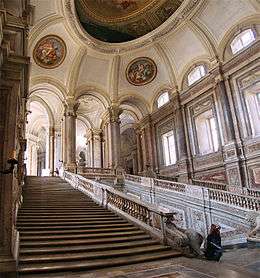 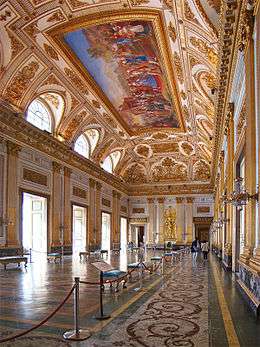 The Diana and Actaeon Fountain at the feet of the Grand Cascade.

From 1923 to 1943 and during World War II the palace was the location of the Accademia Aeronautica, the Italian Air Force Academy. From 1943, during the allied invasion the royal palace served as the seat of the Supreme Allied Commander; Sir Henry Maitland Wilson and later Sir Harold Alexander. In April 1945 the palace was the site of the signing of terms of the unconditional German surrender of forces in Italy. The agreement covered between 600,000 and 900,000 soldiers along the Italian Front, including troops in sections of Austria. The first Allied war crimes trial took place in the palace in 1945; German general Anton Dostler was sentenced to death and executed nearby, in Aversa.[6] In the left hand arc behind the façade, a set of barracks were built. During World War II the soldiers of the US Fifth Army recovered here in a "rest centre".

Layout of the Palace

The palace has 5 floors, 1,200 rooms, including two dozen state apartments, a large library, and a theatre modelled after the Teatro San Carlo of Naples. A monumental avenue that would run 20 kilometers between the palace and Naples was planned but never realized.[7]

The palace has a rectangular plan, measuring 247 × 184 m, and the four sides are connected by two orthogonal arms, forming four inner courts. Each floor measures approximately 47,000 m2 (505,904 sq ft), but considering the five floors, the whole palace measures 235,000 m2 (2,529,519 sq ft). Of all the royal palaces in the world, Caserta is by far the largest in terms of volume, with more than 2 million m³ (70 million cu ft).[8] Behind the façades of its matching segmental ranges of outbuildings that flank the giant forecourt, a jumble of buildings arose to facilitate daily business.

Of all the royal residences inspired by the Palace of Versailles, the Reggia of Caserta is the one that bears the greatest resemblance to the original model: the unbroken balustraded skyline and the slight break provided by pavilions within the long, somewhat monotonous façade. As at Versailles, a large aqueduct was required to bring water for the prodigious water displays. Like its French predecessor, the palace was intended to display the power and grandeur of an absolute Bourbon monarchy. A solecism at Caserta is that above the piano reale, the King's floor, is another floor of equal magnificence. The enfilades of Late Baroque saloni were the heart and seat of government, as well as displays of national wealth. Caserta provided a royal refuge from the dust and factions of the capital, just as Versailles had freed Louis XIV from Paris. The royal palace has more than 40 monumental rooms completely decorated with frescoes when, in comparison, Versailles counts only 22 monumental rooms.

The garden, a typical example of the baroque extension of formal vistas, stretches for 120 ha, partly on hilly terrain. It is also inspired by the park of Versailles. The park starts from the back façade of the palace, flanking a long alley with artificial fountains and cascades. There is a botanical garden, called "The English Garden", in the upper part designed in the 1780s by Carlo Vanvitelli and the German-born botanist, nurseryman, plantsman-designer, John Graefer, trained in London and recommended to Sir William Hamilton by Sir Joseph Banks.[9] It is an early Continental example of an "English garden" in the svelte naturalistic taste of Capability Brown.

The fountains and cascades, each filling a vasca (basin), with architecture and hydraulics by Luigi Vanvitelli at intervals along a wide straight canal that runs to the horizon, rivalled those at Peterhof outside St. Petersburg. These include:

A large number of figures from classical Antiquity were modelled by Gaetano Salomone for the gardens of the Reggia, and executed by large workshops.

The palace was listed as a world heritage site in 1997. According to the rationale, the palace, "whilst cast in the same mould as other 18th century royal establishments, is exceptional for the broad sweep of its design, incorporating not only an imposing palace and park, but also much of the surrounding natural landscape and an ambitious new town laid out according to the urban planning precepts of its time."[10]

The Caserta Palace has been used as a filming location in a number of movie productions. In 1967 it served as an US Army Headquarters in the movie, Anzio with Robert Michum.

The palace featured in Beautiful But Dangerous, starring Gina Lollobrigida, in 1955 and in the opening scenes of the film Anzio from 1968, starring Robert Mitchum. In 1997 it served as a filming location for Star Wars, used as the setting for Queen Amidala's royal palace on Naboo in the 1999 film Star Wars: Episode I – The Phantom Menace. It featured again in the 2002 film Star Wars: Episode II – Attack of the Clones as Queen Jamillia's palace.

The same room was also used in Mission: Impossible III as Vatican City. In the film, a Lamborghini car is blown up in a square inside the palace.

The main staircase is also used in Angels & Demons as the Vatican's staircase. Mezzo soprano Cecilia Bartoli used the palace as the primary location for the film L'art des castrats that accompanies her album Sacrificium, dedicated to the music written for the castrato singers of the baroque period.