For the festival in South Carolina, see Spoleto Festival USA.

Spoleto was situated on the eastern branch of the Via Flaminia, which forked into two roads at Narni and rejoined at Forum Flaminii, near Foligno. An ancient road also ran hence to Nursia. The Ponte Sanguinario of the 1st century BC still exists. The Forum lies under today's marketplace.

Located at the head of a large, broad valley, surrounded by mountains, Spoleto has long occupied a strategic geographical position. It appears to have been an important town to the original Umbri tribes, who built walls around their settlement in the 5th century BC, some of which are visible today.

The first historical mention of Spoletium is the notice of the foundation of a colony there in 241 BC;[2] and it was still, according to Cicero[3] colonia latina in primis firma et illustris: a Latin colony in 95 BC. After the Battle of Lake Trasimene (217 BC) Spoletium was attacked by Hannibal, who was repulsed by the inhabitants[4] During the Second Punic War the city was a useful ally to Rome. It suffered greatly during the civil wars of Gaius Marius and Sulla. The latter, after his victory over Marius, confiscated the territory of Spoletium (82 BC). From this time forth it was a municipium.

Under the empire it seems to have flourished once again, but is not often mentioned in history. Martial speaks of its wine. Aemilianus, who had been proclaimed emperor by his soldiers in Moesia, was slain by them here on his way from Rome (AD 253), after a reign of three or four months. Rescripts of Constantine (326) and Julian (362) are dated from Spoleto. The foundation of the episcopal see dates from the 4th century: early martyrs of Spoleto are legends, but a letter to the bishop Caecilianus, from Pope Liberius in 354 constitutes its first historical mention. Owing to its elevated position Spoleto was an important stronghold during the Vandal and Gothic wars; its walls were dismantled by Totila.[5]

Under the Lombards, Spoleto became the capital of an independent duchy, the Duchy of Spoleto (from 570), and its dukes ruled a considerable part of central Italy. In 774 it became part of Holy Roman Empire. Together with other fiefs, it was bequeathed to Pope Gregory VII by the powerful countess Matilda of Tuscany, but for some time struggled to maintain its independence. In 1155 it was destroyed by Frederick Barbarossa. In 1213 it was definitively occupied by Pope Gregory IX. During the absence of the papal court in Avignon, it was prey to the struggles between Guelphs and Ghibellines, until in 1354 Cardinal Albornoz brought it once more under the authority of the Papal States. 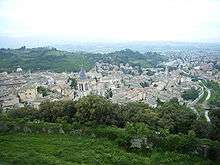 After Napoleon's conquest of Italy, in 1809 Spoleto became capital of the short-lived French department of Trasimène, returning to the Papal States after Napoleon's defeat, within five years. In 1860, after a gallant defence, Spoleto was taken by the troops fighting for the unification of Italy. Giovanni Pontano, founder of the Accademia Pontaniana of Naples, was born here. Another child of Spoleto was Francis Possenti who was educated in the Jesuit school and whose father was the Papal assesor, Francis later entered the Passionists and became Saint Gabriel of Our Lady of Sorrows. 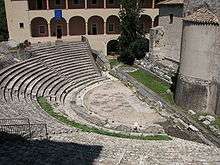 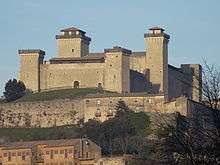 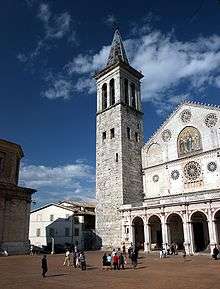 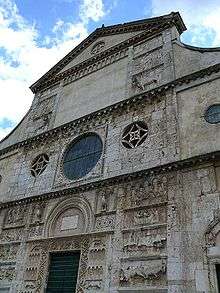 The Festival dei Due Mondi (Festival of the Two Worlds) was founded in 1958. Because Spoleto was a small town, where real estate and other goods and services were at the time relatively inexpensive, and also because there are two indoor theatres, a Roman theatre and many other spaces, it was chosen by Gian Carlo Menotti as the venue for an arts festival. It is also fairly close to Rome, with good rail connections. It is an important cultural event, held annually in late June-early July.

The festival has developed into one of the most important cultural manifestations in Italy, with a three-week schedule of music, theater and dance performances. For some time it became a reference point for modern sculpture exhibits, and works of art left to the city by Alexander Calder and others are a testimony to this.

In the United States, a parallel festival — Spoleto Festival USA — held in Charleston, South Carolina was founded in 1977 with Menotti's involvement. The twinning only lasted some 15 years and, after growing disputes between the Menotti family and the Spoleto Festival USA board, in the early 1990s a separation was consummated. However, following Menotti's death in February 2007, the city administrations of Spoleto and Charleston started talks to re-unite the two festivals which would climax in Spoleto mayor Massimo Brunini's attending the opening ceremony of Spoleto Festival USA in May 2008. For a short period of time, a third parallel festival was also held in Melbourne, Australia.

In 1992, the Spoleto Arts Symposium was initiated with the purpose of bringing talented people from all around the world to study in Spoleto. The program apparently ceased in 2009, to be replaced by a similar program, started by the College-Conservatory of Music (CCM) of the University of Cincinnati in 2010.

Spoleto gained its main results in sport with the local Volleyball team, Olio Venturi Spoleto, who classified in the quarter-finals of the Italian championship in sport.