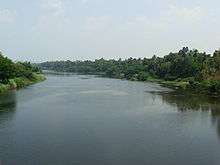 The Pamba River (also called Pampa river) is the third longest river in the South Indian state of Kerala after Periyar and Bharathappuzha and the longest river in the erstwhile princely state of Travancore. Sabarimala temple dedicated to Lord Ayyappa is located on the banks of the river Pamba.

The river is also known as 'Dakshina Bhageerathi' and 'River Baris'.

The Pamba originates at Pulachimalai hill in the Peerumedu plateau in the Western Ghats at an altitude of 1,650 metres (5,410 ft) and flows through Ranni, Adoor, Kozhenchery, Tiruvalla, Chengannur, Kuttanad, Karthikapally, and Ambalappuzha Taluks before emptying into the Vembanad Lake. A noted Anjana temple is situated near this bank. The river enriches the Pathanamthitta, Alappuzha districts of Kerala state. Kuttanad, an important rice cultivating area in Kerala receives its irrigation water from the Pamba river. The Pamba basin is bounded on the east by the Western Ghats. The river shares its northern boundary with the Manimala River basin, while it shares the southern boundary with the Achankovil River basin.

The river Pamba rises at an altitude of 1,650 metres (5,410 ft) on the Peermade Plateau in the Idukki district of Kerala. After traversing a distance of 176 kilometres (109 mi), the river joins the Arabian Sea through a number of channels. The basin extends over an area of 2,235 square kilometres (863 sq mi) with the entire catchment area within Kerala state. The basin is bounded on the east by Western Ghats and on the west by Arabian Sea.

Topography of the basin, reservoirs and command area

Like all the river basins in Kerala, the Pamba basin also can be divided into three natural zones based on elevation, consisting of low land or seaboard, midland and high land.The coast for a short distance along the borders of lakes is flat, retreating from it the surface roughens up into slopes which gradually combine and swell into mountains on the east. The low land area along sea coast is generally swampy and liable to be flooded during monsoon inundation. The plains/midlands succeed low land in gentle ascents and valleys interspersed with isolated low hills. The high land on the eastern portion is broken by long spurs, dense forests, extensive ravines and tangled jungles. Towering above all their slopes are Western Ghats that form eastern boundary of the basins. 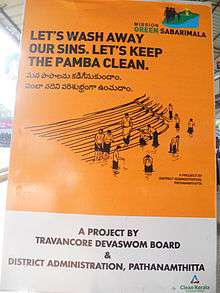 Information board near Nadappanthal, Sabarimala to keep Pamba clean

Due to drought and a lack of conservation and protection by the government, the Pampa River has shrunk to a stream and is totally dry in many places. Nearby wells have also dried up. Water for farming, such as paddy fields, is scarce. Experts are calling for governmental awareness of the dire situation and the need to rein in development that is destroying the environment.[1]

The Kerala High Court has initiated steps to control the pollution of the river from the practice of some visitors to Sabarimala who throw their clothes into it.[2] As part of the Punyam Poonkavanam project, pilgrims have been exhorted to avoid the usage of soap and oil while bathing in River Pamba. They are also requested not to throw any material, including clothes, to this holy river. At a broader level, this project aims to spread the message of cleanliness and greenness beyond Pamba and Sabarimala.[3]

Lord Ayyappan (Sri Dharmasastha) appeared to the Pandalam Raja as a child on the banks of the Pamba River. The Pamba River has been venerated as southern Ganga, and devotees of Lord Ayyappan believe that immersing oneself in the Pamba is equivalent to bathing in the Holy Ganges River. Bathing in the river, believed to absolve one's sins, is a requirement before commencing the trek through the forest to the Ayyappan Temple atop Sabarimala. The river pamba flowing in kerala state has many famous temple in its banks other than the Sabarimala.Tiruvalla Sreevallabhapuram temple, Adoor Mannar Temple, Aranmula temple and Chenganoor Mahadeva temples are most famous few among them.The lake or Saras mentioned in Ramayana is Pamba saras and this is the basin of Present Tungabhadra river and the sabariyasram also situated very near. Then the old Kishkindha(Monkey city) or present day Hampi( UNESCO heritage site) also situated near that pamba saras near Hampi .