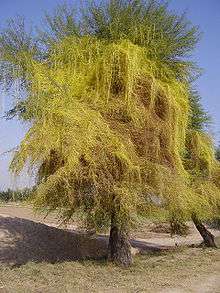 Cuscuta, a stem holoparasite, on an acacia tree in Pakistan

A parasitic plant is a plant that derives some or all of its nutritional requirements from another living plant. All parasitic plants have modified roots, named haustoria (singular: haustorium), which penetrate the host plants, connecting them to the conductive system – either the xylem, the phloem, or both. This provides them with the ability to extract water and nutrients from the host. The organisms which support the parasite are called hosts. Some parasitic plants are able to locate their host plants by detecting chemicals in the air or soil given off by host shoots or roots, respectively. About 4,100 species of parasitic plant in approximately 19 families of flowering plants are known.[1]

Parasitic behavior evolved in angiosperms roughly 12-13 times independently, a classic example of convergent evolution. Roughly 1% of all angiosperm species are parasitic, with a large degree of host dependence.

Seed germination of parasitic plants occurs in a variety of ways. These means can either be chemical or mechanical and the means used by seeds often depends on whether or not the parasites are root parasites or stem parasites. Most parasitic plants need to germinate in close proximity to their host plants because their seeds are limited by the amount of resources available to survive without nutrients from their host plants. Resources are limited due in part to the fact that most parasitic plants are not able to use autotrophic nutrition to establish the early stages of seeding.[2][3]

Root parasitic plant seeds tend to use chemical cues for germination. In order for germination to occur, seeds need to be fairly close to their host plant.[2][3] For example, the seeds of the parasitic plant witchweed (Striga asiatica) need to be within 3 to 4 millimeters (mm) of its host in order to pick up chemical signals in the soil to signal germination. This range is important because Striga asiatica will only grow about 4 mm after germination.[2] Chemical compound cues sensed by parasitic plant seeds are from host plant root exudates that are leached in close proximity from the host’s root system into the surrounding soil. These chemical cues are a variety of compounds that are unstable and rapidly degraded in soil and are present within a radius of a few meters of the plant exuding them. Parasitic plants germinate and follow a concentration gradient of these compounds in the soil toward the host plants if close enough. These compounds are called strigolactones. Strigolactone stimulates ethylene biosynthesis in seeds causing them to germinate.[2][3]

Stem parasitic plants, unlike most root plants, germinate using the resources inside its endosperm and are able to survive for a small amount of time. An example, Dodder (Cuscuta spp.), is a parasitic plant whose seed falls to the ground and may remain dormant for up to five years before it is able to sense a host plants nearby. Using the resources in the seed endosperm, Dodder is able to germinate. Once germinated, the plant has 6 days to find and establish a connection with its host plant before its resources run out.[2]

Dodder seeds germinate above ground and then the plant sends out stems in search of its host plant reaching up to 6 cm before it dies. It is believed that the plant uses two methods of finding a host. The stem is able to pick up its host plant’s scent whereby it then is able to orient itself in the direction of its host. Scientists used volatiles from tomato plants (α-pinene, β-myrcene, and β-phellandrene) to test the reaction of C. pentagona and found that the stem will oriented itself in the direction of the odor.[3] Some studies suggest that by using light reflecting from nearby plants dodders are able to select host with higher sugar because of the levels of chlorophyll in the leaves.[5] Once Dodder finds its host, it wraps itself around the host plants stem. Using adventitious roots, Dodder taps into the host plant’s stem and creates a haustorium, which is a special connection into the host plant vascular tissue. Dodder makes several of these connections with the host as it moves up the plant.[2][3][5]

Some parasitic plants are generalists and parasitize many different species, even several different species at once. Dodder (Cassytha spp., Cuscuta spp.) and red rattle (Odontites vernus) are generalist parasites. Other parasitic plants are specialists that parasitize a few or even just one species. Beech drops (Epifagus virginiana) is a root holoparasite only on American beech (Fagus grandifolia). Rafflesia is a holoparasite on the vine Tetrastigma. Plants such as Pterospora become parasites of mycorrhizal fungi. There is evidence that parasites also practice self-discrimination, species of Tryphysaria experience reduced haustorium development in the presence of other Tryphysaria. Although, the mechanism for self-discrimination in parasites is not yet known.[6]

Parasitism also evolved within aquatic species of plants and algae. Parasitic marine plants are described as benthic, meaning that they are sedentary or attached to another structure. Plants and algae that grow on the host plant, using it as an attachment point are given the designation epiphytic (epilithic is the name given to plants/algae that use rocks or boulders for attachment), while not necessarily parasitic, some species occur in high correlation with a certain host species, suggesting that they rely on the host plant in some way or another. In contrast, endophytic plants and algae grow inside their host plant, these have a wide range of host dependence from obligate holoparasites to facultative hemiparasites.[7]

Marine parasites occur as a higher proportion of marine flora in temperate rather than tropical waters. While no full explanation for this is available, many of the potential host plants such as kelp and other macroscopic brown algae are generally restricted to temperate areas. Roughly 75% of parasitic red algae infect hosts in the same taxonomic family as themselves, these are given the designation adelphoparasites. Other marine parasites, deemed endozoic, are parasites of marine invertebrates (molluscs, flatworms, sponges) and can be either holoparasitic or hemiparasitic, some retaining the ability to photosynthesize after infection.[7]

Species within Orobanchaceae are some of the most economically destructive species on Earth. Species of Striga alone are estimated to cost billions of dollars a year in crop yield loss annually, infesting over 50 million hectares of cultivated land within Sub-Saharan Africa alone. Striga can infect both grasses and grains, including corn, rice and sorghum, undoubtedly some of the most important food crops. Orobanche also threatens a wide range of important crops, including peas, chickpeas, tomatoes, carrots, and varieties of the genus Brassica (e.g. cabbage, lettuce, and broccoli). Yield loss from Orobanche can reach 100% and has caused farmers in some regions of the world to abandon certain staple crops and begin importing others as an alternative. Much research has been devoted to the control of Orobanche and Striga species, which are even more devastating in developing areas of the world, though no method has been found to be entirely successful.[6] 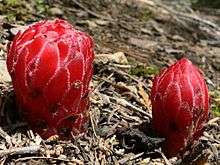 About 400 species of flowering plants, plus one gymnosperm (Parasitaxus usta), are parasitic on mycorrhizal fungi. This effectively gives these plants the ability to become associated with many of the other plants around them. They are termed myco-heterotrophs rather than parasitic plants. Some myco-heterotrophs are Indian pipe (Monotropa uniflora), snow plant (Sarcodes sanguinea), underground orchid (Rhizanthella gardneri), bird's nest orchid (Neottia nidus-avis), and sugarstick (Allotropa virgata). Within the taxonomic family Ericaceae, known for extensive mycorrhizal relationships, there are the Monotropoids. The Monotropoids include the genera Monotropa, Monotropsis, and Pterospora among others. Myco-heterotrophic behavior is commonly accompanied by the loss of chlorophyll.[10]