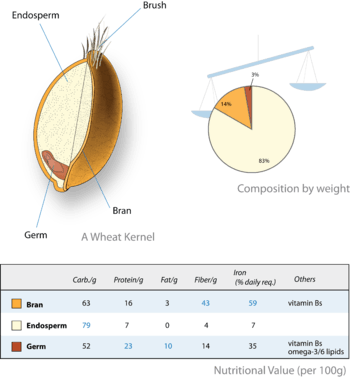 Endosperm is a tissue produced inside the seeds of most of the flowering plants following fertilization. It surrounds the embryo and provides nutrition in the form of starch, though it can also contain oils and protein. This can make endosperm a source of nutrition in the human diet. For example, wheat endosperm is ground into flour for bread (the rest of the grain is included as well in whole wheat flour), while barley endosperm is the main source of sugars for beer production. Other examples of endosperm that forms the bulk of the edible portion are coconut "meat" and coconut "water",[1] and corn. Some plants, such as orchids, lack endosperm in their seeds.

Endosperm is formed when the two sperm nuclei inside a pollen grain reach the interior of an embryo sac or female gametophyte. One sperm nucleus fertilizes the egg, forming a zygote, while the other sperm nucleus usually fuses with the two polar nuclei at the center of the embryo sac, forming a primary endosperm cell (its nucleus is often called the triple fusion nucleus).That cell created in the process of double fertilization develops into the endosperm. Because it is formed by a separate fertilization, the endosperm constitutes an organism separate from the growing embryo.

About 70% of angiosperm species have endosperm cells that are polyploid.[4] These are typically triploid (containing three sets of chromosomes), but can vary widely from diploid (2n) to 15n.[5]

One species of flowering plant, Nuphar polysepala, has endosperm that is diploid, resulting from the fusion of a pollen nucleus with one, rather than two, maternal nuclei. It is believed that early in the development of angiosperm lineages, there was a duplication in this mode of reproduction, producing seven-celled/eight-nucleate female gametophytes, and triploid endosperms with a 2:1 maternal to paternal genome ratio.[6]

There are three types of Endosperm development:

Helobial endosperm formation - Where a cell wall is laid down between the first two nuclei, after which one half develops endosperm along the cellular pattern and the other half along the nuclear pattern.

The evolutionary origins of double fertilization and endosperm are unclear, attracting researcher attention for over a century. There are the two major hypotheses:[7]

The role of endosperm in seed development

In some groups (e.g. grains of the family Poaceae) the endosperm persists to the mature seed stage as a storage tissue, in which case the seeds are called "albuminous" or "endospermous", and in others it is absorbed during embryo development (e.g., most members of the family Fabaceae, including the common bean, Phaseolus vulgaris), in which case the seeds are called "exalbuminous" or "cotyledonous" and the function of storage tissue is performed by enlarged cotyledons ("seed leaves"). In certain species (e.g. corn, Zea mays); the storage function is distributed between both endosperm and the embryo. Some mature endosperm tissue stores fats (e.g. castor bean, Ricinis communis) and others (including grains, such as wheat and corn) store mainly starches.

The dust-like seeds of orchids have no endosperm. Orchid seedlings are mycoheterotrophic in their early development. In some other species, such as coffee, the endosperm also does not develop.[9] Instead, the nucellus produces a nutritive tissue termed "perisperm". The endosperm of some species is responsible for seed dormancy.[10] Endosperm tissue also mediates the transfer of nutrients from the mother plant to the embryo, it acts as a location for gene imprinting, and is responsible for aborting seeds produced from genetically mismatched parents.[4] In angiosperms, the endosperm contain hormones such as cytokinins, which regulate cellular differentiation and embryonic organ formation.[11]

Cereal crops are grown for their edible fruit (grains or caryopses), which are primarily endosperm. In the caryopsis, the thin fruit wall is fused to the seed coat. Therefore, the nutritious part of the grain is the seed and its endosperm. In some cases (e.g. wheat, rice) the endosperm is selectively retained in food processing (commonly called white flour), and the embryo (germ) and seed coat (bran) removed. The processed grain has a lower quality of nutrition. Endosperm thus has an important role within the human diet worldwide.

The aleurone is the outer layer of endosperm cells, present in all small grains and retained in many dicots with transient endosperm. The cereal aleurone functions for both storage and digestion. During germination, it secretes the amylase enzyme that breaks down endosperm starch into sugars to nourish the growing seedling.[12] [13]