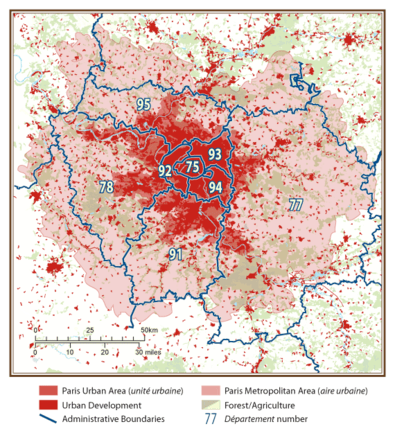 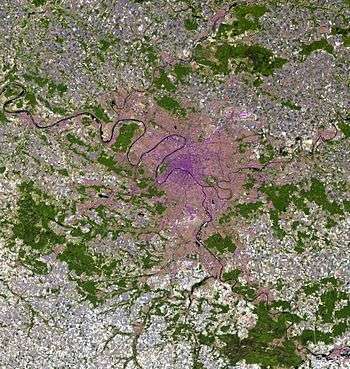 The Paris metropolitan area (French: aire urbaine de Paris, pronounced: [ɛʁ yʁbɛn də paʁi]) is a statistical area that describes the reach of commuter movement to and from Paris and its surrounding suburbs.

As of 2010 the Paris metropolitan area, with its 17,174 km² (6,631 sq mi), extends significantly beyond Paris' administrative Île-de-France region, a region also commonly referred to as the région parisienne ("Paris Region").

The area had a population of 12,405,426 as of the January 2013 census, making it the second largest urban region in the European Union after that of London. Nearly 19% of France's population resides in the region.

The Paris metropolitan area expands at each population census due to the rapid population growth in the Paris area. New communes (municipalities) surrounding Paris are included when they meet the 40% commuter threshold required. At the 1968 census, the earliest date for which population figures were retrospectively computed for French aire urbaines, the Paris metropolitan area had 8,368,459 inhabitants in an area that only encompassed central Île-de-France.[3]

The table below shows the population growth of the Paris urban area (unité urbaine, also called pôle urbain, or "urban cluster", by INSEE in the context of a metropolitan area), i.e. Paris and the densely built municipalities surrounding it. (Note: the area shown in red in the map above):

The table below shows the population growth of the Paris metropolitan area (aire urbaine), i.e. the urban area (pôle urbain) and the commuter belt (couronne périurbaine) surrounding it. (Note: the area shown in red and pink in the map above):