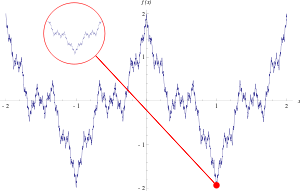 The Weierstrass function is continuous everywhere but differentiable nowhere.

In mathematics, a pathological phenomenon is one whose properties are considered atypically bad or counterintuitive; the opposite is well-behaved. A notable case is the Alexander horned sphere, a counterexample showing that topologically embedding the sphere S2 in R3 may fail to "separate the space cleanly", unless an extra condition of tameness is used to suppress possible wild behaviour. See Jordan–Schönflies theorem.

In layman's terms, this is because of the great number of possible functions; the majority are nowhere differentiable, and relatively few can ever be described and studied, of which most that are interesting or useful also turn out to be well-behaved. To quote Henri Poincaré:

Logic sometimes makes monsters. For half a century we have seen a mass of bizarre functions which appear to be forced to resemble as little as possible honest functions which serve some purpose. More of continuity, or less of continuity, more derivatives, and so forth. Indeed, from the point of view of logic, these strange functions are the most general; on the other hand those which one meets without searching for them, and which follow simple laws appear as a particular case which does not amount to more than a small corner.

In former times when one invented a new function it was for a practical purpose; today one invents them purposely to show up defects in the reasoning of our fathers and one will deduce from them only that.

If logic were the sole guide of the teacher, it would be necessary to begin with the most general functions, that is to say with the most bizarre. It is the beginner that would have to be set grappling with this teratologic museum.

This highlights the fact that the term pathological is subjective or at least context-dependent, and its meaning in any particular case resides in the community of mathematicians, not necessarily within the subject matter of mathematics itself.

In cases of pathology, often "most" or "almost all" examples of a phenomenon are pathological, which is formalized by measures of size such as cardinality, measure (almost everywhere), probability (almost surely), or a generic property. For example, the set of rational numbers is countable (and has measure zero, and is a meagre set), but the set of irrational numbers is uncountable (and has full measure, and is a comeagre set): "almost all" real numbers are irrational, in these senses. In this case, pathologies are not the rare exceptions but the most common.

Mathematicians (and those in related sciences) very frequently speak of whether a mathematical object—a function, a set, a space of one sort or another—is "well-behaved". The term has no fixed formal definition, and is dependent on context, mathematical interests, fashion, and taste. To ensure that an object is "well-behaved" mathematicians introduce further axioms to narrow down the domain of study. This has the benefit of making analysis easier, but cuts down on the generality of any conclusions reached. Concepts like non-Euclidean geometry were once considered ill-behaved, but are now common objects of study.

In both pure and applied mathematics (optimization, numerical integration, or mathematical physics, for example), well-behaved also means not violating any assumptions needed to successfully apply whatever analysis is being discussed.

The opposite case is usually labeled pathological. It is not unusual to have situations in which most cases (in terms of cardinality or measure) are pathological, but the pathological cases will not arise in practice unless constructed deliberately.

The term "well-behaved" is generally applied in an absolute sense—either something is well-behaved or it is not. For example:

Unusually, the term could also be applied in a comparative sense:

Pathological examples often have some undesirable or unusual properties that make it difficult to contain or explain within a theory. Such pathological behaviour often prompts new investigation which leads to new theory and more general results. For example, some important historical examples of this are the following:

At the time of their discovery, each of these was considered highly pathological; today, each has been assimilated into modern mathematical theory. These examples prompt their observers to correct their beliefs or intuitions; sometimes they may even necessitate a reassessment of foundational definitions and concepts. Over the course of history, they have led to more correct, more precise, and more powerful mathematics. For example, the Dirichlet function is Lebesgue integrable, and convolution with test functions is used to approximate any locally integrable function by smooth functions. (The approximations converge almost everywhere and in the space of locally integrable functions.)

Whether a behavior is pathological is by definition subject to personal intuition. Pathologies depend on context, training, and experience—what is pathological to one researcher may very well be standard behaviour to another.

Pathological examples can show the importance of the assumptions in a theorem. For example, in statistics, the Cauchy distribution does not satisfy the central limit theorem, even though its symmetric bell-shape appears similar to many distributions which do; it fails the requirement to have a mean and standard deviation which exist and are finite.

Some of the best-known paradoxes such as the Banach–Tarski paradox and Hausdorff paradox are based on the existence of non-measurable sets. Mathematicians, unless they take the minority position of denying the axiom of choice, are in general resigned to living with such sets.

In computer science, pathological has a slightly different sense with regard to the study of algorithms. Here, an input (or set of inputs) is said to be pathological if it causes atypical behavior from the algorithm, such as a violation of its average case complexity, or even its correctness. For example, hash tables generally have pathological inputs: sets of keys that collide on hash values. Quicksort normally has O(n log n) time complexity, but deteriorates to O(n2) when given input that triggers suboptimal behaviour.

The term is often used pejoratively, as a way of dismissing such inputs as being specially designed to break a routine that is otherwise sound in practice (compare with Byzantine). On the other hand, awareness of pathological inputs is important as they can be exploited to mount a denial-of-service attack on a computer system. Also, the term in this sense is a matter of subjective judgment as with its other senses. Given enough run time, a sufficiently large and diverse user community, or other factors, an input which may be dismissed as pathological could in fact occur (as seen in the first test flight of the Ariane 5).

Subjectively, exceptional objects (such as the icosahedron or sporadic simple groups) are generally considered "beautiful", unexpected examples of a theory, while pathological phenomena are often considered "ugly", as the name implies. Accordingly, theories are usually expanded to include exceptional objects – for example, the exceptional Lie algebras are included in the theory of semisimple Lie algebras: the axioms are seen as good, the exceptional objects as unexpected but valid. By contrast, pathological examples are instead taken to point out a shortcoming in the axioms, requiring stronger axioms to rule them out – for example, requiring tameness of an embedding of a sphere in the Schönflies problem. One may study the more general theory, including the pathologies, which may provide its own simplifications (the real numbers have properties very different from the rationals, and likewise continuous maps have very different properties from smooth ones), but will also in general study the narrower theory from which the original examples were drawn.

This article incorporates material from pathological on PlanetMath, which is licensed under the Creative Commons Attribution/Share-Alike License.