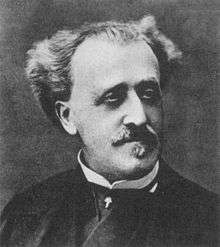 Paul-Ferdinand Gachet (30 July 1828 – 9 January 1909) was a French physician most famous for treating the painter Vincent van Gogh during his last weeks in Auvers-sur-Oise. Gachet was a great supporter of artists and the Impressionist movement. He was an amateur painter, signing his works "Paul van Ryssel", referring to his birthplace: Gachet came "from" (Dutch: "van") "Ryssel" (actually Rijssel) – the Dutch name of Lille.[1]

Born and raised in Lille, his family moved to Mechelen, where Gachet's father was transferred to in 1844/1845 to start a new branch of the firm he was working for.[2]

He qualified for a B.A. at the University of Paris and then worked at the mental hospitals of Bicêtre and Salpêtrière. His teachers included Armand Trousseau. In 1858 he received a medical degree for his thesis Étude sur la Mélancolie (Éditeur du Montpellier Médecal).

He returned to Paris and set up a private practice. He knew Gustave Courbet, Champfleury, Victor Hugo and later Paul Cézanne. He was a friend of the chemist Henri Nestlé and prescribed Nestlé's new powdered milk supplement to some of his child patients.

He spent much time with Charles Méryon after the etcher's committal to Charenton. He oversaw Auguste Renoir's recovery from pneumonia in 1882. He advised Édouard Manet against the amputation of his leg. However, Manet did not follow this advice.

Gachet's tomb is situated in section 52 of Père Lachaise Cemetery in Paris.[3]

Vincent's brother, Theo van Gogh, thought that Gachet's background and sensitivity toward artists would make him an ideal doctor for Vincent during his recovery. Very soon after he began seeing Gachet, however, Vincent began to doubt the doctor's usefulness.[4] Vincent described Gachet as: "sicker than I am, I think, or shall we say just as much".

Gachet has come in for much criticism over the years regarding Van Gogh's suicide after ten weeks of consultation. However Van Gogh was either unable or unwilling to follow his doctors' advice to cut back on alcohol and smoking. According to Arnold, "there was not much else available to any physician of the day which could have reversed the course of Vincent's illness."[5] And he summarizes the medical treatment that Van Gogh received from his various doctors thus: "The overall assessment is rather that they did as well as expected with an unfamiliar disease and a difficult patient."[6]

Gachet was friends with and treated Pissarro, Renoir, Manet, Cézanne and Goeneutte, to name just a few. He had amassed one of the largest impressionist art collections in Europe before he died in 1909. Gachet, his wife and his home were the subjects of several pieces of art by celebrated artists including:[7]