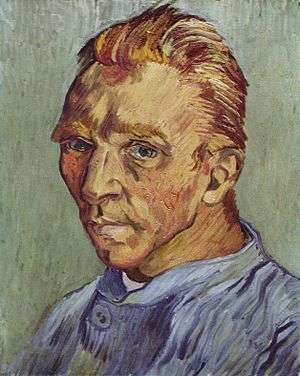 Vincent van Gogh, Self-portrait without beard, end September 1889, (F 525), Oil on canvas, 40 × 31 cm., Private collection. This may have been Van Gogh's last self-portrait. Given as a birthday gift to his mother. (See Remarks below)[1]

This article refers to self portraits and portraits of Vincent van Gogh (1853–1890). It includes self-portraits, portraits of him by other artists, and photographs, one of which is dubious. Van Gogh's dozens of self-portraits were an important part of his oeuvre as a painter. Most probably, van Gogh's self-portraits are depicting the face as it appeared in the mirror he used to reproduce his face, i.e. his right side in the image is in reality the left side of his face.

The first self-portrait by van Gogh that survived, is dated 1886. 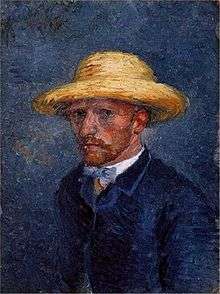 Portrait of Theo, March or April 1887, (once considered Self-Portrait with Straw Hat), re-attributed in 2011 by the Van Gogh Museum, Amsterdam (F294) 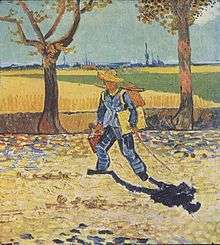 Painter on his way to work: Vincent van Gogh on the road to MontmajourAugust 1888 (F 448)Oil on canvas, 48 × 44 cmformerly Kaiser-Friedrich-Museum, Magdeburg, believed to have been destroyed by fire in World War II

All the self-portraits executed in Saint-Rémy show the artist's head from the left, i.e. the side with non-mutilated ear.

No self-portraits were executed by van Gogh in Auvers-sur-Oise, during the final weeks of his life.

A confiscated self-portrait [Self-portrait dedicated to Paul Gauguin, September 1888], by Vincent van Gogh is auctioned at Gallerie Fisher, Lucerne, in 1939. The winning bid was $40,000 by Dr. Frankfurter.[11]

In Nazi Germany, Vincent van Gogh paintings were among those labelled "degenerate art". Works were stolen and/or destroyed by German authorities including the self-portrait dedicated to Paul Gauguin, September 1888, depicted in the black and white picture. 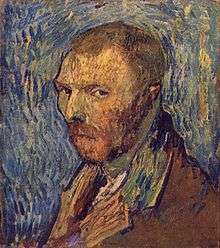 Almost at the same time as when his Catalogue raisonné was published, Jacob Baart de la Faille had to admit that he had included paintings emerging from dubious sources, and of dubious quality. Shortly after, in 1930, De la Faille rejected some thirty odd paintings, which he had originally included in his catalogue - together with a hundred of others he had already excluded: Self-portraits - and Sunflowers - held a prominent place in the set he now rejected. In 1970, the editor's of De la Faille's posthumous manuscript brand marked most of these dubious Self-portraits as forgeries,[13] but could not settle all disputes, at least on one:

Meanwhile, the authenticity of a second "self-portrait" has been challenged:

Portraits of Vincent van Gogh by other artists