Anthonij (Anton) Rudolf Mauve (18 September 1838 – 5 February 1888) was a Dutch realist painter who was a leading member of the Hague School. He signed his paintings 'A. Mauve' or with a monogrammed 'A.M.'. A master colorist, he was a very significant early influence on his cousin-in-law Vincent van Gogh.

Most of Mauve's work depicts people and animals in outdoor settings. In his Morning Ride in the Rijksmuseum, for example, fashionable equestrians at the seacoast are seen riding away from the viewer. An unconventional detail, horse droppings in the foreground, attests his commitment to realism.

His best known paintings depict peasants working in the fields. His paintings of flocks of sheep were especially popular with American patrons, so popular indeed that a price differential developed between scenes of "sheep coming" and "sheep going".[1]

Anton Mauve was born on 18 September 1838 in Zaandam, a town in the Dutch province of North Holland. A year after his birth, his father Willem Carel Mauve, a Mennonite chaplain, was sent to Haarlem, the capital city of the province where Mauve grew up.

He was apprenticed to the painter Pieter Frederik van Os followed by Wouter Verschuur. In his further development he worked with Paul Gabriël, painting from nature, and they regularly stayed and worked together at Oosterbeek, the 'Dutch Barbizon'. He was a friend of Jozef Israëls and Willem Maris.[3]

In 1872 Mauve settled in The Hague where he became a leading member of the Hague School of painters and one of the founders of the Hollandsche Teekenmaatschappij in 1876, as well as playing a leading role in the development of the Pulchri Studio, The Hague's most influential art society at the time.

In the last two years of his life Mauve settled in the village of Laren in the region surrounding Hilversum called het Gooi. The group of painters who settled there, including Jozef Israëls and Albert Neuhuys, came to be known collectively as the Larense School and the region around het Gooi was dubbed 'Mauve land' as far afield as the United States. Mauve will have influenced many other painters one of whom was the Scottish painter, Robert McGregor (1847-1922).

Ariëtte (Jet) Carbentus, the Artist's Wife,in the Dunes. She was a cousin of van Gogh on his mother's side.[8] 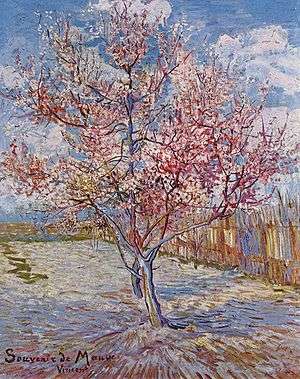 Mauve was married to van Gogh's cousin Ariëtte (Jet) Sophia Jeannette Carbentus,[9] and he was a major influence on van Gogh, who revered him. He is mentioned, directly or indirectly, in 152 of van Gogh's surviving letters. A comparative table of number of letters mentioning his most significant influences is shown in the table.

Van Gogh spent three weeks at Mauve's studio at the end of 1881 and during that time he made his first experiments in painting under Mauve's tutelage, first in oils and then early the next year in watercolour (previously he had concentrated on drawing). Mauve continued to encourage him and lent him money to rent and furnish a studio, but later grew cold towards him and did not return a number of letters.[10][11]

In a letter to his brother Theo van Gogh dated 7 May 1882, van Gogh describes "a very regrettable conversation" in which Mauve told him their association was "over and done with" adding by way of explanation that van Gogh had a vicious character. Van Gogh continued his letter by expressing his sorrow, and then launches defiantly into a passionate defence of his relationship with Clasina (Sien) Maria Hoornik, a pregnant prostitute he had befriended.[12]

People suspect me of something... it’s in the air... I must be hiding something... Vincent is keeping something back that may not be divulged.. Well, gentlemen, I’ll tell you – you who set great store by manners and culture, and rightly so, provided it’s the real thing – what is more cultured, more sensitive, more manly: to forsake a woman or to take on a forsaken one?

The reality was that they were lovers. The presumption must be that Mauve had heard of the relationship (although van Gogh's letter does not say so expressly) and broke off the association because of it. However, their relationship had already become strained by late January.[13] Nevertheless, van Gogh continued to hold Mauve in very high esteem and dedicated one of his most iconic paintings to Mauve's memory after hearing of his sudden death.

Now here, for instance, at this moment, I have 6 paintings of blossoming fruit trees. And the one I brought home today would possibly appeal to you — it’s a dug-over patch of ground in an orchard, a wicker fence and two peach trees in full bloom, pink against a sparkling blue sky with white clouds and in sunshine. You may well see it, since I’ve decided to send this one to Jet Mauve. I’ve written on it 'Souvenir de Mauve Vincent & Theo'.[14]

Mauve's mother Elisabeth Margaretha Hirschig was a first cousin twice removed of Anton Hirschig, the young Dutch artist who was a fellow lodger with van Gogh at the Auberge Ravoux at the time of van Gogh's death. 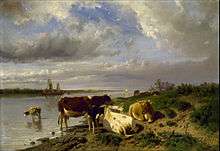 The Return of the Flock, Laren