Maintained by the three states ruling Communist parties' newspapers (Rudé právo, Neues Deutschland and Trybuna Ludu), it was dubbed to be the "world's biggest amateur cycling race"[1] and "Tour de France of the East".

Following the fall of Communism in 1989, the Peace Race was no longer state-sponsored and organizers faced trouble with gathering funds. The event was last held in 2006.[2]

The first Peace Race was held in 1948, when there were two editions connecting cities of Warsaw and Prague. The one to Prague was won by August Prosinek, the other one to Warsaw by Alexander Zoric, both from Yugoslavia. During the Cold War the Peace Race was known as the 'Tour de France of the East'.

Because cyclists from the Eastern Bloc were not allowed to become professional it was an amateur race. It attracted the best cyclists from communist countries, plus guest teams from non-communist countries. Communist-bloc riders tended to dominate the event, but there were exceptions: Briton Ian Steel won the 1952 race, and the British League of Racing Cyclists team also won the team competition - the first time that both classifications had gone to the same nation.

One of the later winners was Sergei Sukhoruchenkov, who also won the gold medal on the Olympic Road Race in 1980.

After the end of the Cold War the race lost its significance. No race was held in 2005, and the 2006 race turned out to be the last. 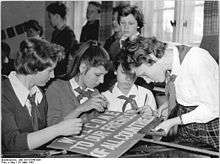 German schoolgirls in Tessin (Rostock, Mecklenburg) making an English-language sign to be used to greet riders in the 1961 Peace Race.

In 2006, the 58th edition took place on May 13–20. It started in Austria's Linz and via Czech Republic headed to Germany where it ended in Hannover. No capital city of these countries were crossed during the race.

After 2006, the race has been cancelled from the cycling calendar.

In April/May 2012 Alan Buttler organised a re-run of the 1955 Peace Race as a tribute to his father, Alf Buttler, who was the GB cycling team mechanic for many events in the 1950s, 60s and 70s. He was joined by former peace riders including Gustav-Adolf Schur, Geoff Wiles, John Woodburn, Alan Jacob, and Axel Peschel.

There is a museum in Kleinmühlingen in Germany dedicated to the Peace Race.

A Junior Peace Race was first held in 1965 and held again the following year. After a hiatus it was revived in 1974 and has been held every year since, continuing after the senior race was no longer organised. Several riders who won the junior race have gone on to senior success, including Roman Kreuziger, Sr., Roman Kreuziger, Jr., Denis Menchov, Fabian Cancellara, Peter Velits, Tanel Kangert and Michal Kwiatkowski.[4] An Under 23 Peace Race was added in 2013.[5] 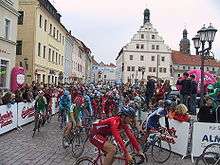 Individual overall competitions were won by cyclist from following countries: