Roman Kreuziger (Czech pronunciation: [ˈroman ˈkrojtsɪɡr̩]; born 6 May 1986) is a Czech professional road bicycle racer for UCI ProTour team Orica–BikeExchange.[2] Kreuziger is an all-rounder, with climbing and time trial abilities, becoming a contender for the General classification of stage races. He is also considered one of the biggest talents of the sport after winning the 2004 Junior Road World Championships and the 2008 Tour de Suisse at the age of 22. Next year, he won the 2009 Tour de Romandie and in 2013, he was the victor of the Amstel Gold Race.

His father, Roman Kreuziger Sr., was also a bicycle racer who won the Tour of Austria in 1991 and the Cyclocross Junior World Championships in 1983.

He turned professional in 2006 with Liquigas after a successful amateur career which saw him win the Junior Road World Championships in 2004 and a stage of the Giro delle Regioni in 2005. In 2007 he showed great improvements in his abilities by placing second in the prologues of Paris–Nice and the Tour de Romandie, where he also finished sixth overall. He took his first professional victory in the second stage of the Settimana Ciclistica Lombarda. In late 2007, he also completed his first Grand Tour after finishing 21st in the Vuelta a España.

In 2008 he finished second in the Tour de Romandie, 35 seconds behind Andreas Klöden, one of the world's leading riders. He avenged his loss by winning the Tour de Suisse by finishing 49 seconds ahead of Klöden and winning the mountain time trial to Klausen Pass. In his first Tour de France, he proved himself as an excellent climber among the world's greats, eventually finishing second in the youth competition, and 12th overall. After the Tour, Kreuziger was known to be one of the future riders to potentially win grand tours.

In 2009 he got back to the Tour de Romandie and finally succeeded in his attempt to win the race, getting also one stage victory. He added to this success by finishing in ninth place in the Tour de France.

In 2010 he won the Giro di Sardegna, finished third in Paris-Nice. Kreuziger's 9th overall in the Tour de France was a disappointment because it wasn't much of an improvement from his 9th-place finish in the 2009 Tour (Though he would move into 8th after the Alberto Contador's stripped title). He then made the move from Liquigas–Doimo to Astana after five seasons with the Italian team.[3] 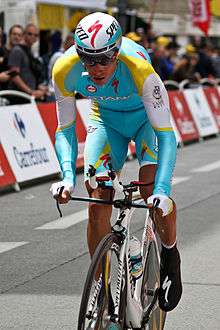 Kreuziger at the 2011 Tour de France

In 2011 Kreuziger won the mountains classification and a stage in the Giro del Trentino. He achieved a 4th-place finish in the Liège-Bastogne-Liège by winning the sprint of the chasing group, almost half-a-minute behind winner Philippe Gilbert.[4] He then aimed for the Giro d'Italia. Kreuziger didn't quite have the uphill strength that Contador, Nibali, and Scarponi had, causing him to miss out on the podium. He ended up finishing 5th overall and he also won the young rider's classification.[5]

In 2012 he finished third in the Tirreno-Adriatico.[6] He entered the 2012 Giro d'Italia leading Team Astana with Paolo Tiralongo. He won the mountainous stage 19 after a solo breakaway[7] but had a disappointing 15th overall finish.[8] Kreuziger at the 2013 Tour de France

Kreuziger left Astana at the end of the 2012 season, and joined Saxo–Tinkoff on a three-year contract from the 2013 season onwards.[2] In April 2013 he won the Amstel Gold Race. He broke free of the lead group with 7 km (4.3 mi) to go and resisted the peloton's surge on the Cauberg, taking a solo triumph.[9] Kreuziger worked with doping doctor Michele Ferrari according to former teammate Leonardo Bertagnolli.[10] When asked about the allegations after the Amstel Gold Race, Kreuziger refused to comment on the ties, saying he would address the topic after the Tour de Romandie.[11] He did and he admitted working with Ferrari from the autumn of 2006 through 2007 but that he did not use banned drugs.[12] After the Amstel Gold Race, Kreuziger finished 3rd in the Tour de Suisse after aiming to win it.

In 2014, Kreuziger started his season finishing 8th in the Tour of Oman. He rode the Tirreno Adriatico in support of Alberto Contador though he finished 3rd overall with Contador winning the race. After, he rode through the Aredennes classics finishing in the top ten in the Fleche Wallonne and the Liege-Bastogne-Liege. He then finished 8th the Tour de Suisse.

In June 2014 Tinkoff-Saxo announced that Kreuziger was being temporarily suspended from racing after the UCI questioned abnormalities in his biological passport. The UCI had originally highlighted the problems in his biological data for the 2011 and 2012 seasons through a letter in June 2013, which Kreuziger had responded to in October 2013, even though the values did not get out of the biological passport range which determines what values the gained cyclist samples ought to have. The UCI subsequently followed this up in May 2014. This prevented Kreuziger from riding the Tour de France and Tour de Pologne.[13] In August 2014 the Court of Arbitration for Sport rejected an appeal by Kreuziger to allow him to start the 2014 Vuelta a España.[14] On 22 September, it was announced that the Czech Olympic Committee had cleared him of any anti-doping violation and that he was free to compete again.[15] The UCI and the World Anti-Doping Agency appealed against the decision to the Court of Arbitration for Sport in October 2014.[16] The case was dropped by both agencies on 5 June 2015.[17] Kreuziger took part in the 2015 Tour de France, finishing in 17th place.

In August 2016, Orica-BikeExchange announced the 'game-changing signing' of Kreuziger on a 2-year contract, ending at the end of the 2018 season. Kreuziger said, “ORICA-BikeExchange was an easy choice for me when I started to consider my next team and my future as a rider. I really admire the ambitions they have going onwards, and I want to fully apply myself to help their young riders go for the ultimate success in the Grand Tours.” [18]