The Penn State IFC/Panhellenic Dance Marathon, commonly referred to as THON, is a 46-hour dance marathon that takes place every February at the Pennsylvania State University in University Park, Pennsylvania with the purpose of raising money and providing emotional support to children and families in order to combat pediatric cancer. It was started in 1973 by the university's Interfraternity Council, and in its first year, more than $2,000 was raised, with 39 couples dancing for 30 hours straight. Today, it is the largest student-run philanthropy in the world, by involvement and revenue[1][2] with $13,343,517.33 having been raised at the 2014 event.[3] The money that is raised is donated to The Four Diamonds Fund, a charity devoted to defeating pediatric cancer through research and caring for patients at the Penn State Hershey Children's Hospital. 74% of funds are transferred to an experimental therapeutics fund while 12% of funds are used for patient and family support.[4] In 2011, the Four Diamonds Experimental Therapeutics Endowment was funded to a level which enabled the Penn State Hershey Children’s Hospital to recruit two physician scientists to the Four Diamonds research team. More than 15,000 students get involved in THON each year, organizing it and raising funds with the rallying cry, "For The Kids!". 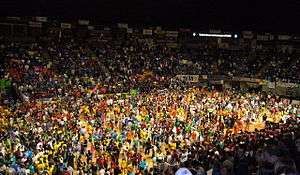 THON 2007 held for the first time in the Bryce Jordan Center on the University Park campus of Penn State.

Originally, THON was proposed as a way to rebuild the Intrafraternity Council's image, and began as a dance competition. It began taking place in the HUB Ballroom in 1973, serving as a competition that split proceeds between the marathon winners and a charity.[6]More than $2,000 was raised, and it went to a charity for special needs children, while the couple that raised the most money and completed the thirty-hour marathon received $300. The following year, fundraising efforts multiplied, the length of the event was extended to 48 hours, and more than $10,000 was raised for the American Heart Association.

In 1977, a new charity was selected to be the recipient of the money raised by the dance marathon, The Four Diamonds Fund. That year, nearly $29,000 was raised, and in 1978, nearly $53,000 was raised and designated for pediatric leukemia. That year, in a car accident while traveling from Penn State to the Hershey Medical Center to deliver the check for the money raised, several students were injured, and one, Kevin Steinberg, was killed. Today, one THON organizer is recognized each year for outstanding service with the Kevin Steinberg Award. That event sealed the bond between THON and The Four Diamonds Fund — THON has made a pledge that all money raised will be donated to Four Diamonds as long as they continue the fight against pediatric cancer.

In 1979, THON held its Kick-off Dinner for the first time and also moved into a new home: the Mary Beaver White Building. That year, the organization raised $72,132 for the kids. In 1982, Penn State Heisman Trophy winner John Cappelletti spoke to the dancers about losing his brother, Joey, to leukemia ten years earlier, and the event that year raised more than $95,000, and the following year, the sum of $131,000 was raised. In 1988, nearly $300,000 was raised, and in 1990, THON raised $671,000. That year, the Panhellenic Council became an official co-sponsor, and the IFC Dance Marathon became the IFC / Panhellenic Dance Marathon. In 1992, the 20th anniversary THON passed the million dollar mark. $2.0 million was raised in 1998.

In recent years, with sufficient money to cover treatment costs, THON has shifted its focus to long-term projects. The first such project was the establishment of the Four Diamonds Research Institute at the Penn State Children's Hospital. Two endowed chair positions, complete with lab funding and research scholarships, have now been funded. The original pledge of $5 million for this project was made in 1999 and was to be paid over 5 years, but the organization did it in only two. In 2004, $10 million, to be contributed over six years, was pledged to create a Pediatric Cancer Pavilion at the Hershey Medical Center. While the current facilities are completely modern from a medical point-of-view, treatment areas are scattered all over the hospital, and many of the facilities are not designed for the treatment of pediatric patients. The Pavilion's design will consolidate all of these functions and include design features—like wide hallways for play and water fountains appropriate for a child's height—designed specifically for its young visitors.

For THON 2014, the Overall Committee was renamed to the Executive Committee in order to make THON more relatable to those outside of the Penn State community.[9] Subsequently, THON Overalls are now referred to as THON Directors.

Events throughout the year

A number of events throughout the year pave the way to THON weekend:

This event, held in the fall, has grown into the largest 5K in central Pennsylvania. Thousands of runners gather each fall to raise awareness and funds for THON and The Four Diamonds Fund. Awards are given to the top finishers in different age categories. Typically a Four Diamonds family comes and speaks before the race starts. The race starts and ends at the Bryce Jordan Center located on Curtin Road on Penn State's University Park campus.

The Family Carnival is held each year approximately a month after the THON 5k is held. During the Family Carnival, many current and former Four Diamonds families come to Penn State to visit with their "Penn State pals" as well as their Adopt-a-Family organizations. Penn State's White Building is filled with games in the carnival or boardwalk style, all made and staffed by student volunteers. At the end of the event, THON's organizers and the Executive Committee unveil the new logo. At this time, the THON Store is re-opened and merchandise featuring the new logo is sold, with all the profits contributing to the year's total and donations for the Four Diamonds Fund.

The Road to THON Celebration

This event, held in February, was once the beginning of the "fundraising window", the period during which organizations may solicit funds in the charity's name. Year-round fundraising is prohibited for a variety of reasons. However, the fundraising window has been significantly expanded, now usually starting in early October. The Road to THON Celebration is no longer formally linked to fundraising, and has instead become a celebration of the "spirit of THON," featuring speeches by THON organizers and the presentation of awards to exceptional volunteers. In the past this event was known and recognized by volunteers as the "THON Kick-off Dinner."

While Dance Marathon encompasses all of the fundraising and spirit activities held throughout the year, THON Weekend is the actual marathon itself, taking place during the third weekend in February. In 2007, THON moved to its new home in the Bryce Jordan Center on the Penn State University campus in University Park, Pennsylvania. Captains, committee members, and the Executive Committee spend the entire weekend there conducting the event, even sleeping in makeshift accommodations set up throughout the building. Each of the organizing committees is responsible for different tasks throughout the weekend. For example, Dancer Relations keeps the dancers motivated, Rules and Regulations keeps them safe, and OPPerations performs construction and janitorial duties.

The dancers, unlike the volunteers, do not get to take a break. They are, however, treated to a variety of food solicited by the Hospitality committee and donated by various local restaurants and stores. Volunteers are also responsible for ensuring that the dancers are entertained throughout the two days. For many years now, Larry Moore has been the event's official DJ, staying awake with the dancers and spinning their favorite tunes as well as crowd favorites like "Livin' on a Prayer" by Bon Jovi. While teams were once ranked by their dancing, docked points for both time off the floor and not keeping time with the music, Dance Marathon has become a no-sitting, no-sleeping marathon. Dancers are expected to remain awake and on their feet all weekend. It is not unusual to see dancers remain standing even while receiving medical attention from athletic trainers and EMTs who also volunteer their time.

Many visitors come to Penn State for THON Weekend. Alumni, especially those with past volunteer involvement, frequently return for the event. Penn State tour guides make certain to introduce prospective students and their families to the largest student-run philanthropy in the world. Current and former Four Diamonds families (those receiving support from the Fund for their child's illness) are perhaps the most welcome visitors. Dancers and fundraising organizations look forward to seeing the children that ultimately benefit from their actions. The Family Relations committee is responsible for ensuring their time there is a respite from their usual concerns.

Local and national news coverage of the event is common. Large sections of both the campus newspaper, The Daily Collegian, and the local newspaper, The Centre Daily Times, are devoted to covering it each year. It has been featured on The Today Show on NBC more than once. Each year, promotional videos are produced which are widely purchased by students and alumni. In 2005, under the guidance of the Technology committee, webcasts were begun on both the public Internet and high-speed Penn State inter-campus links. The former brought the events to children being treated at Hershey who were too sick to make the trip themselves. The webcasts provide 24/7 live coverage of the events taking place THON weekend. Most recently, the website has been redesigned by the Technology Committee to give THON a completely new look.

Besides the 700 dancers and more than 15,000 organizers, thousands of Penn State students get involved in raising money for THON. These students are generally organized into teams under other student organizations. Many organizations field THON teams, from fraternities and sororities to the University Park Undergraduate Association. Students who are not affiliated with a particular organization can also raise money to enter a lottery to dance as individual couple. Individual dancer couples are selected in the beginning of February. Teams are responsible for abiding by rules issued by the Executive Committee, the organizing body of THON, but are otherwise independent and allowed to raise funds however they see fit. Most of them go "canning", standing in public places throughout the U.S. Northeast on weekends from September to November with cans carrying the Penn State logo and the plea to "Help Kids with Cancer". Other students employ door-to-door solicitation and letter solicitation, while others request corporate donations. There has been a recent shift in focus to these alternative forms of fundraising as worries have emerged over student safety while canning.

Fundraising is not the only focus. One of THON's primary goals is to raise awareness of the plight of children afflicted with pediatric cancer. Campus organizations, especially fraternities and sororities, compete for "Spirit Points" that are seen as in the "Spirit of THON". Possibilities for earning points include volunteering on one of the organizing committees, hosting or attending THON events, and donating materials necessary for the weekend itself. While points were once awarded purely on number of team members involved, there has been a recent shift to awards based on percentage of members involved. This new system was an attempt to level the playing field for smaller student organizations. The winning organization receives a number of prizes, including special admission privileges to that year's event, as well as the following year's.

Each committee is made up of a number of Captains, as well as one Director, and assigned a color.[10]