With 9 academic departments and 67 cooperative extension offices, one in each of Pennsylvania’s counties, the college is widely recognized as one of the nation's top institutions for agricultural research and education programs. 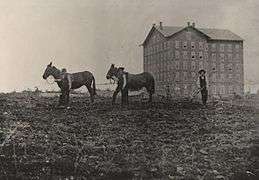 Farmer High School and also known as the Old Main

In 1855, before the Penn State College of Agricultural Sciences, it was a high school known as The Farmer's High School run by Evan Pugh. Pugh helped to transform the Farmer's High School into the Penn State College of Agricultural Sciences by supporting Congress to pass the Morrill Land-Grant Act. The only land-grant university in Pennsylvania, Penn State became one of the nation's very first when President Abraham Lincoln signed the Morrill Act into law in 1862. As a result, government receives money from the sales of land to help fund a college that would teach people better farming methods. In addition to learning farming methods, Pugh had contributed other subjects to the college including chemistry, geology, mathematics, and mineralogy. Not only did he contributed knowledge to the college but he also donated money towards the laboratory buildings and research. Pugh died on April 29, 1864. Today, he is known as the first President of The Pennsylvania State University and the highest award a professor can receive at the university is named after him which is called the "Evan Pugh Professors."

The college is organized into nine academic departments:[4]

The Penn State College of Agricultural Sciences invests nearly $97 million in research and graduate study yearly. Scientists in the college are seeking solutions to the agricultural and ecological problems of our time by conducting basic and applied research focusing on cross-cutting thematic areas.