For other uses, see Perimeter (disambiguation).

A perimeter is a path that surrounds a two-dimensional shape. The word comes from the Greek peri (around) and meter (measure). The term may be used either for the path or its length&endash;it can be thought of as the length of the outline of a shape. The perimeter of a circle or ellipse is called its circumference.

Calculating the perimeter has several practical applications. A calculated perimeter is the length of fence required to surround a yard or garden. The perimeter of a wheel (its circumference) describes how far it will roll in one revolution. Similarly, the amount of string wound around a spool is related to the spool's perimeter.

The perimeter is the distance around a shape. Perimeters for more general shapes can be calculated, as any path, with

is the length of the path and

is an infinitesimal line element. Both of these must be replaced with by algebraic forms in order to be practically calculated. A generalized notion of perimeter, which includes hypersurfaces bounding volumes in

-dimensional Euclidean spaces, is described by the theory of Caccioppoli sets.

Perimeter of a rectangle.

Polygons are fundamental to determining perimeters, not only because they are the simplest shapes but also because the perimeters of many shapes are calculated by approximating them with sequences of polygons tending to these shapes. The first mathematician known to have used this kind of reasoning is Archimedes, who approximated the perimeter of a circle by surrounding it with regular polygons.

A cleaver of a triangle is a segment from the midpoint of a side of a triangle to the opposite side such that the perimeter is divided into two equal lengths. The three cleavers of a triangle all intersect each other at the triangle's Spieker center.

Circumference of a circle

If the diameter of a circle is 1, its circumference equals π.
Main article: Circumference

The perimeter of a circle, often called the circumference, is proportional to its diameter and its radius. That is to say, there exists a constant number pi, π (the Greek p for perimeter), such that if P is the circle's perimeter and D its diameter then,

In terms of the radius r of the circle, this formula becomes,

To calculate a circle's perimeter, knowledge of its radius or diameter and the number π suffices. The problem is that π is not rational (it cannot be expressed as the quotient of two integers), nor is it algebraic (it is not a root of a polynomial equation with rational coefficients). So, obtaining an accurate approximation of π is important in the calculation. The computation of the digits of π is relevant to many fields, such as mathematical analysis, algorithmics and computer science.

The more one cuts this shape, the lesser the area and the greater the perimeter. The convex hull remains the same. 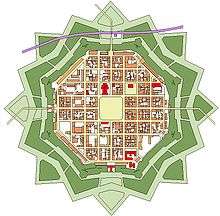 The Neuf-Brisach fortification perimeter is complicated. The shortest path around it is along its convex hull.
Main articles: Area (geometry) and convex hull

The perimeter and the area are two main measures of geometric figures. Confusing them is a common error, as well as believing that the greater one of them is, the greater the other must be. Indeed, a commonplace observation is that an enlargement (or a reduction) of a shape make its area grow (or decrease) as well as its perimeter. For example, if a field is drawn on a 1/10,000 scale map, the actual field perimeter can be calculated multiplying the drawing perimeter by 10,000. The real area is 10,0002 times the area of the shape on the map. Nevertheless, there is no relation between the area and the perimeter of an ordinary shape. For example, the perimeter of a rectangle of width 0.001 and length 1000 is slightly above 2000, while the perimeter of a rectangle of width 0.5 and length 2 is 5. Both areas equal to 1.

Proclus (5th century) reported that Greek peasants "fairly" parted fields relying on their perimeters.[1] However, a field's production is proportional to its area, not to its perimeter, so many naive peasants may have gotten fields with long perimeters but small areas (thus, few crops).

If one removes a piece from a figure, its area decreases but its perimeter may not. In the case of very irregular shapes, confusion between the perimeter and the convex hull may arise. The convex hull of a figure may be visualized as the shape formed by a rubber band stretched around it. In the animated picture on the left, all the figures have the same convex hull; the big, first hexagon.

The isoperimetric problem is to determine a figure with the largest area, amongst those having a given perimeter. The solution is intuitive; it is the circle. In particular, this can be used to explain why drops of fat on a broth surface are circular.

This problem may seem simple, but its mathematical proof requires some sophisticated theorems. The isoperimetric problem is sometimes simplified by restricting the type of figures to be used. In particular, to find the quadrilateral, or the triangle, or another particular figure, with the largest area amongst those with the same shape having a given perimeter. The solution to the quadrilateral isoperimetric problem is the square, and the solution to the triangle problem is the equilateral triangle. In general, the polygon with n sides having the largest area and a given perimeter is the regular polygon, which is closer to being a circle than is any irregular polygon with the same number of sides.