For other uses, see Quotient (disambiguation). 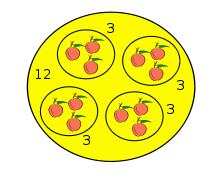 In arithmetic, a quotient (from Latin: quotiens "how many times", pronounced ˈkwoʊʃənt) is the result of division.[1] For example, when dividing twenty-one (the dividend) by three (the divisor), the quotient is seven.

Outside of arithmetic, many branches of math have co-opted the word "quotient" to describe structures built by breaking larger structures into pieces. Given a set with an equivalence relation defined on it, a "quotient set" may be created which contains those equivalence classes as elements. A quotient group may be formed by breaking a group into a number of similar cosets, while a quotient space may be formed in a similar process by breaking a vector space into a number of similar linear subspaces.