For the most traded currency in the world going by the name of peso, see Mexican peso. For the song by ASAP Rocky, see Peso (song). 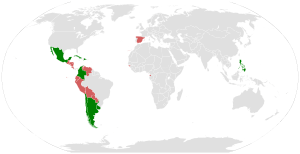 The peso (meaning weight in Spanish, or more loosely pound) was a coin that originated in Spain and became of immense importance internationally. Peso is now the name of the monetary unit of several former Spanish colonies.

Peso was a name given in Spain and particularly in Hispanic America to the 8-royal coin or real de a ocho, a large silver coin of the type commonly known as a thaler (dollar) in Europe. It had a legal weight of 27.468 g and a millesimal fineness of 930.5 (25.561 g fine silver). This real de a ocho or peso was minted in Spain from the mid 16th century, and even more prolifically in Spanish America, in the mints of Mexico and Peru. It was originally known as the "piece of eight" in English, due to the nominal value of 8 reales.

The piece of eight became a coin of worldwide importance in the 17th century, especially in trade with India and the Far East, where it was immediately melted down. At this time, the piece of eight was produced in Mexico and Peru in a rapid and simplified manner. Instead of making a proper flan or planchet, a lump of silver of proper weight and fineness was cut off the end of a silver bar, then flattened out and impressed by a hammer. The result was a crude, temporary coin, an irregular lump of silver. This type of coin became known as a cob in English, or a macuquina in Spanish. The Crown was entitled to a fifth of all gold and silver mined, the Quinto Real (royal fifth), and cobs were a convenient means of handling and accounting for silver. Although intended to serve only temporarily, some did remain in circulation as currency. Because of their irregular shape and incomplete design, cobs were ideal candidates for clipping and counterfeiting.

This coin was originally known in English as a piece of eight, then as a Spanish dollar, and then as a Mexican dollar. In French, it was a piastre and in Portuguese, a pataca or patacão. The Spanish names at various times and in various places were patacón, duro, or fuerte.

Because of domestic financial and monetary problems, Spain devalued its silver currency by about 20% on October 14, 1686, introducing a new eight-real coin weighing only 21.912 g (with 20.392 g fine silver). Because of the importance of the piece of eight in international trade, this new silver coin was intended only for circulation in Spain itself, and the older and heavier eight-real coin continued to be minted. The new eight-real was known as a peso maria or peso sencillo (as opposed to the old peso fuerte or peso duro), and the new standard was called plata nueva (new silver), usually called new plate in English. After this, the monetary systems of Spain and of Spanish America developed along different lines. Accounts in Spain were kept in the copper real (real de vellón) of 34 maravedíes, while in Spanish America accounts continued in the silver real and eventually in pesos of eight reales.

After 1686, the old piece of eight remained the standard coin in the Spanish colonies. Because the piece of eight had the same intrinsic value as the thaler (dollar) coins familiar to English colonists in North America, it was being called a Spanish dollar by the end of the 17th century and the older term piece of eight gradually fell into disuse.

Spanish laws of 1728 and 1730 adopted modern minting techniques. Coins were to be minted with technologically advanced equipment so that they would be perfectly round and have milled edges. There was a simultaneous reduction in weight and fineness, the peso becoming 27.064 g, 0.916⅔ fine (24.809 g fine silver). This is the coin that became known in the British colonies as the Spanish milled dollar.

During the War of the Spanish Succession (1701–1714), the French introduced a coin worth two reales, it was called a peseta (a little peso) in Spanish, and soon the name was given to the Spanish two-real coin as well. In 1717 the mints at Madrid, Segovia, Cuenca, and Seville flooded the country with debased silver coin (the real now containing only 2.556 g fine silver). These coins were designated plata provincial (provincial silver) to distinguish them from the older, "heavy" silver still minted in America, now called plata nacional (national silver).

During the French occupation, Joseph Bonaparte issued a 20-reales piece or piastre, actually a duro or peso of the 1772 standard (27.064 g, 0.9028 fine), and gave it a value of 20 reales. The peseta (containing 4.887 g fine silver) became a four-real coin. The peso duro and peseta were retained in the monetary reform of 1821.

The successful revolt of the Spanish colonies in America had cut off the supply of silver coin by 1820. By 1825 “...the Spanish dollar, the universal coin of three centuries, had lost its supremacy, and...its universal dominion was in process of disintegration into rival ‘currency areas’, chief among which was destined to be the area dominated by British sterling.”[1]

But the Spanish dollar continued to dominate the Eastern trade, and the peso of eight reales continued to be minted in the New World. The coin was sometimes called a Republican dollar, but eventually any peso of the old Spanish eight-real standard was generally referred to as a Mexican dollar, Mexico being the most prolific producer. Mexico restored the standard of 1772, producing a coin of 27.073 g, 0.9028 fine, containing 24.441 g fine silver (the mark weight of the Mexico City mint was very slightly heavier than the standard mark of Spain).

In 1869–1870, not long after adopting the metric system, Mexican mints began producing the peso of “Un Peso” denomination, popularly known as “balanza” (scales), with the same weight and fineness, but with a uniform diameter of 37 mm (making it slightly thicker than the old peso, which was slightly irregular, with a diameter of 38–40 mm). Chinese merchants rejected the new coin, discounting it 4%–5% in favor of the old eight-real peso. Faced with this threat to her silver exports, Mexico returned to the old eight-real peso by decree of May 29, 1873, but international trade was already shifting from silver to gold, and after 1873 there was a steady decline in the international price of silver.

The Philippine peso is derived from the Spanish silver coin Real de a Ocho or Spanish dollar, in wide circulation in the Americas and Southeast Asia during the 17th and 18th centuries, through its use in the Spanish colonies and even in the United States and Canada.

The Philippine peso was established on 1 May 1852, when the Banco Español-Filipino de Isabel II (now the Bank of the Philippine Islands) introduced notes denominated in pesos fuertes ("strong pesos", written "PF"), until 17 October 1854, when a royal decree confirmed the by-laws of the Banco Español-Filipino. The notes were in limited circulation and were usually used for bank transactions. The peso replaced the real at a rate of 8 reales = 1 peso. Until 1886, the peso circulated alongside Mexican coins, some of which were still denominated in reales and escudos (worth two pesos). Coin production commenced in 1861 and, in 1864, the Philippines decimalised, dividing the peso into 100 centimos de peso, with the peso equal to 226⁄7 grains of gold. In 1886, Philippine colonial authorities began gradually phasing-out all Mexican coins in circulation in the islands, citing that Mexican coins were by then of lesser value than coins produced in Manila. As with Mexican dollars, the Philippine unit was based on silver, unlike the United States and Canada where a gold standard operated. Thus, following the great silver devaluation of 1873, the Philippine peso devalued in parallel with the Mexican unit, and by the end of the 19th century, was worth half a United States dollar. The name of the currency remained unchanged despite the 1896 Philippine Revolution and the subsequent declaration of independence in 1898.

Countries that use pesos