The fineness of a precious metal refers to the ratio by weight of the primary metal to any added base metals or impurities. Many precious metals are used in the form of alloys. Other metals are added to increase hardness, to make the metal more practical for use in such items as coins and jewelry, or to decrease the cost of the alloy. For example, copper is added to the precious metal silver to make a more durable alloy for use in coins, housewares and jewelry. Coin silver, which was used for making silver coins in the past, contains 90% silver and 10% copper, by mass. Sterling silver contains 92.5% silver and 7.5%, by mass, of other metals, usually copper.

Millesimal fineness is a system of denoting the purity of platinum, gold and silver alloys by parts per thousand of pure metal by mass in the alloy. For example, an alloy containing 75% gold is denoted as "750". Many European countries use decimal hallmark stamps (i.e. '585', '750', etc.) rather than '14K', '18K', etc., which is used in the United Kingdom and United States.

The millesimal fineness is usually rounded to a three figure number, particularly where used as a hallmark, and the fineness may vary slightly from the traditional versions of purity. 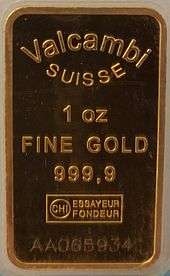 Karat purity is measured as 24 times the pure mass divided by the total mass:

is the karat rating of the material,

is the mass of pure gold in the alloy, and

is the total mass of the material.

The karat system is increasingly being complemented or superseded by the millesimal fineness system, described above.

Conversion between percentage of pure gold and karats:

However, this system of calculation gives only the mass of pure gold contained in an alloy. The term 18-karat gold means that the alloy's mass consists of 75% of gold and 25% of alloy(s). The quantity of gold by volume in a less-than-24-karat gold alloy differs according to the alloy(s) used. For example, knowing that standard 18-karat yellow gold consists of 75% gold, 12.5% silver and the remaining 12.5% of copper (all by mass), the volume of pure gold in this alloy will be 60% since gold is much denser than the other metals used: 19.32 g/cm3 for gold, 10.49 g/cm3 for silver and 8.96 g/cm3 for copper.

This formula gives the amount of gold in cubic centimeters or in milliliters in an alloy:

is the volume of gold in cubic centimeters or in milliliters,

is the total mass of the alloy in grams, and

is the karat purity of the alloy.

For 10-carat gold, the gold volume in the alloy represents about 26% of the total volume for standard yellow gold. Talking about purity according to mass could lead to some misunderstandings; for many people, purity means volume.

Karat is a variant of carat. First attested in English in the mid-15th century, the word carat came from Middle French carat, from Italian carato, both which came from Greek kerátion (κεράτιον) meaning carob seed (literally "small horn")[10][11][12] (diminutive of κέρας - keras, "horn"[13]), also from Arabic qīrāṭ meaning "fruit of the carob tree", also "weight of 4 grains", (قيراط) and was a unit of mass[14] though it was probably not used to measure gold in classical times.[10]

A piece of alloy metal containing a precious metal may also have the weight of its precious component referred to as its fine weight. For example, 1 troy ounce of 18 karat gold (which is 75% gold) may be said to have a fine weight of 0.75 troy ounces.