Petra Rossner (born 14 November 1966) is a German cyclist, who won the gold medal in 3 km pursuit track cycling at the 1992 Summer Olympics in Barcelona.[1] In the same event she won the 1991 World Championships and finished second in 1989.

Rossner retired after the 2004 season. 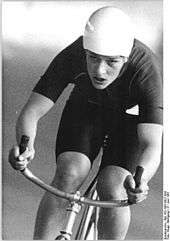 From 1996 on, she was living in Leipzig with her partner Judith Arndt.[2] They have since split.