For other uses, see Phoenix. 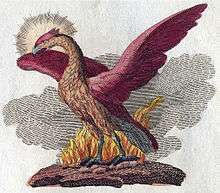 In Greek mythology, a phoenix or phenix (Greek: φοῖνιξ phoinix; Latin: phoenix, phœnix, fenix) is a long-lived bird that is cyclically regenerated or reborn.

Associated with the Sun, a phoenix obtains new life by arising from the ashes of its predecessor. According to some sources, the phoenix dies in a show of flames and combustion, although there are other sources that claim that the legendary bird dies and simply decomposes before being born again.[1] According to some texts, the phoenix could live over 1,400 years before rebirth.[2] Herodotus, Lucan, Pliny the Elder, Pope Clement I, Lactantius, Ovid, and Isidore of Seville are among those who have contributed to the retelling and transmission of the phoenix motif.

In the historical record, the phoenix "could symbolize renewal in general as well as the sun, time, the Empire, metempsychosis, consecration, resurrection, life in the heavenly Paradise, Christ, Mary, virginity, the exceptional man, and certain aspects of Christian life".[3]

In ancient Greece and Rome, the bird, φοῖνιξ, was sometimes associated with the similar-sounding Phoenicia, a civilization famous for its production of purple dye from conch shells. A late antique etymology offered by the 6th- and 7th-century CE archbishop Isidore of Seville accordingly derives the name of the phoenix from its allegedly purple-red hue. Because the costly purple dye from Phoenicia was associated with the upper classes in antiquity and, later, with royalty, in the medieval period the phoenix was considered "the royal bird".[5]

In spite of these folk etymologies, with the deciphering of the Linear B script in the 20th century, the original Greek φοῖνιξ was decisively shown to be derived from Mycenaean Greek po-ni-ke, itself open to a variety of interpretations.[6]

Relation to the Egyptian Bennu

Classical discourse on the subject of the phoenix points to a potential origin of the phoenix in Ancient Egypt. In the 19th century scholastic suspicions appeared to be confirmed by the discovery that Egyptians in Heliopolis had venerated the Bennu, a solar bird observed in some respects to be similar to the Greek phoenix. However, the Egyptian sources regarding the bennu are often problematic and open to a variety of interpretations. Some of these sources may have actually been influenced by Greek notions of the phoenix, rather than the other way around.[7]

Herodotus, writing in the 5th century BC, gives a somewhat skeptical account of the phoenix:

"[The Egyptians] have also another sacred bird called the phoenix which I myself have never seen, except in pictures. Indeed it is a great rarity, even in Egypt, only coming there (according to the accounts of the people of Heliopolis) once in five hundred years, when the old phoenix dies. Its size and appearance, if it is like the pictures, are as follow:- The plumage is partly red, partly golden, while the general make and size are almost exactly that of the eagle. They tell a story of what this bird does, which does not seem to me to be credible: that he comes all the way from Arabia, and brings the parent bird, all plastered over with myrrh, to the temple of the Sun, and there buries the body. In order to bring him, they say, he first forms a ball of myrrh as big as he finds that he can carry; then he hollows out the ball, and puts his parent inside, after which he covers over the opening with fresh myrrh, and the ball is then of exactly the same weight as at first; so he brings it to Egypt, plastered over as I have said, and deposits it in the temple of the Sun. Such is the story they tell of the doings of this bird."[8] 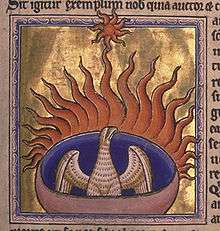 Detail from the 12th century Aberdeen Bestiary, featuring a phoenix

The phoenix is sometimes pictured in ancient and medieval literature and medieval art as endowed with a nimbus, which emphasizes the bird's connection with the Sun.[9] In the oldest images of phoenixes on record these nimbuses often have seven rays, like Helios (the personified sun of Greek mythology).[10] Pliny the Elder[11] also describes the bird as having a crest of feathers on its head,[9] and Ezekiel the Dramatist compared it to a rooster.[12]

Although the phoenix was generally believed to be colorful and vibrant, there is no clear consensus about its coloration. Tacitus claims that its color made it stand out from all other birds.[13] Some thought that the bird had peacock-like coloring, and Herodotus' claim of red and yellow is popular in many versions of the story on record.[14] Ezekiel the Dramatist declared that the phoenix had red legs and striking yellow eyes,[12] but Lactantius said that its eyes were blue like sapphires[15] and that its legs were covered in scales of yellow-gold with rose-colored talons.[16]

Herodotus, Pliny, Solinus, and Philostratus describe the phoenix as similar in size to an eagle,[17] but Lactantius and Ezekiel the Dramatist both claim that the phoenix was larger, with Lactantius declaring that it was even larger than an ostrich.[18]

Scholars have observed analogues to the phoenix in a variety of cultures. These analogues include the Hindu garuda and gandaberunda, the Russian firebird, the Persian Simorgh, Georgian paskunji, the Arabian Anka عنقاء, and from that, the Turkish Zümrüdü Anka, the Tibetan Me byi karmo, the Chinese fenghuang and zhu que, and the Japanese hō-ō.[19]

Dante refers to the phoenix in Inferno Canto XXIV:

In the play Henry VIII by William Shakespeare and John Fletcher, the King says in Act V Scene v, in flattering reference to his young daughter Elizabeth (who was to become Queen Elizabeth I):

Nor shall this peace sleep with her; but as when
The bird of wonder dies, the maiden phoenix,
Her ashes new create another heir
As great in admiration as herself;
So shall she leave her blessedness to one,
When heaven shall call her from this cloud of darkness,
Who from the sacred ashes of her honour
Shall star-like rise as great in fame as she was,
And so stand fix'd.