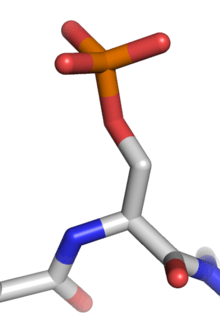 Phosphorylation of sugars is often the first stage of their catabolism. It allows cells to accumulate sugars because the phosphate group prevents the molecules from diffusing back across their transporter. Phosphorylation of glucose is a key reaction in sugar metabolism because many sugars are first converted to glucose before they are metabolized further.

Research D. G. Walker of the University of Birmingham determined the presence of two specific enzymes in adult guinea pig liver, both of which catalyze the phosphorylation of glucose to glucose 6 phosphate. The two enzymes have been identified as a specific glucokinase (ATP-D-glucose 6-phosphotransferase) and non-specific hexokinase (ATP-D-hexose 6-phosphotransferase).

The liver’s crucial role in controlling blood sugar concentrations by breaking down glucose into carbon dioxide and glycogen is characterized by the negative delta G value, which indicates that this is a point of regulation with. The hexokinase enzyme has a low Km, indicating a high affinity for glucose, so this initial phosphorylation can proceed even when glucose levels at nanoscopic scale within the blood.

The phosphorylation of glucose can be enhanced by the binding of Fructose-6-phosphate, and lessened by the binding fructose-1-phosphate. Fructose consumed in the diet is converted to F1P in the liver. This negates the action of F6P on glucokinase,[3] which ultimately favors the forward reaction. The capacity of liver cells to phosphorylate fructose exceeds capacity of metabolize fructose-1-phosphate. Consuming excess fructose ultimately results in an imbalance in liver metabolism, which indirectly exhausts the liver cell’s supply of ATP.[4]

Phosphorylation of glucose is imperative in processes within the body. For example, phosphorylating glucose is necessary for insulin-dependent mechanistic target of rapamycin pathway activity within the heart. This further suggests a link between intermediary metabolism and cardiac growth.[5]

One such example of the regulatory role that phosphorylation plays is the p53 tumor suppressor protein. The p53 protein is heavily regulated[12] and contains more than 18 different phosphorylation sites. Activation of p53 can lead to cell cycle arrest, which can be reversed under some circumstances, or apoptotic cell death.[13] This activity occurs only in situations wherein the cell is damaged or physiology is disturbed in normal healthy individuals.

Upon the deactivating signal, the protein becomes dephosphorylated again and stops working. This is the mechanism in many forms of signal transduction, for example the way in which incoming light is processed in the light-sensitive cells of the retina.

Regulatory roles of phosphorylation include

Glycolysis is an essential process of glucose degrading into two molecules of pyruvate, through various steps, with the help of different enzymes. It occurs in ten steps and proves that phosphorylation is a much required and necessary to attain the end products. Phosphorylation initiates the reaction in step 1 of the preparatory step[17] (first half of glycolysis), and initiates step 6 of payoff phase (second phase of glycolysis).[18]

Glucose, by nature, is a small molecule with the ability to diffuse in and out of the cell. By phosphorylating glucose (adding a negatively charged phosphate group), glucose is converted to glucose-6-phosphate and trapped within the cell as the cell membrane is negatively charged. This reaction occurs due to the enzyme hexokinase, an enzyme that helps phosphorylate many six-membered ring structures. Glucose-6-phosphate cannot travel through the cell membrane and is therefore, coerced to stay inside the cell. Phosphorylation takes place in step 3, where fructose-6-phosphate is converted to fructose-1,6-bisphosphate. This reaction is catalyzed by phosphofructokinase.

Phosphorylation functions as an extremely vital component of glycolysis, for it helps in transport, control and efficiency.[19]

Eukaryotic DNA is organized with histone proteins in specific complexes called chromatin. The chromatin structure functions and facilitates the packaging, organization and distribution of eukaryotic DNA. However, it has a negative impact on several fundamental biological processes such as transcription, replication and DNA repair by restricting the accessibility of certain enzymes and proteins. Post-translational modification of histones such as histone phosphorylation has been shown to modify the chromatin structure by changing protein:DNA or protein:protein interactions.[29] Histone post-translational modifications modify the chromatin structure. The most commonly associated histone phosphorylation occurs during cellular responses to DNA damage, when phosphorylated histone H2A separates large chromatin domains around the site of DNA breakage.[30] Researchers investigated whether modifications of histones directly impact RNA polymerase II directed transcription. Researchers choose proteins that are known to modify histones to test their effects on transcription, and found that the stress-induced kinase, MSK1, inhibits RNA synthesis. Inhibition of transcription by MSK1 was most sensitive when the template was in chromatin, since DNA templates not in chromatin were resistant to the effects of MSK1. It was shown that MSK1 phosphorylated histone H2A on serine 1, and mutation of serine 1 to alanine blocked the inhibition of transcription by MSK1. Thus results suggested that the acetylation of histones can stimulate transcription by suppressing an inhibitory phosphorylation by a kinase as MSK1.[31]

Antibodies can be used as powerful tool to detect whether a protein is phosphorylated at a particular site. Antibodies bind to and detect phosphorylation-induced conformational changes in the protein. Such antibodies are called phospho-specific antibodies; hundreds of such antibodies are now available. They are becoming critical reagents both for basic research and for clinical diagnosis.

Example of posttranslational modification detected on a 2D gel (spot boundaries delimited by analysis software, identification by mass spectrometry, P46462 is the protein ID in Expasy)

Posttranslational modification (PTM) isoforms are easily detected on 2D gels. Indeed, phosphorylation replaces neutral hydroxyl groups on serines, threonines, or tyrosines with negatively charged phosphates with pKs near 1.2 and 6.5. Thus, below pH 5.5, phosphates add a single negative charge; near pH 6.5, they add 1.5 negative charges; above pH 7.5, they add 2 negative charges. The relative amount of each isoform can also easily and rapidly be determined from staining intensity on 2D gels.

In some very specific cases, the detection of the phosphorylation as a shift in the protein's electrophoretic mobility is possible on simple 1-dimensional SDS-PAGE gels, as it's described for instance for a transcriptional coactivator by Kovacs et al.[32] Strong phosphorylation-related conformational changes (that persist in detergent-containing solutions) are thought to underlie this phenomenon. Most of the phosphorylation sites for which such a mobility shift has been described fall in the category of SP and TP sites (i.e. a proline residue follows the phosphorylated serine or threonine residue).

More recently large-scale mass spectrometry analyses have been used to determine sites of protein phosphorylation. Over the last 4 years, dozens of studies have been published, each identifying thousands of sites, many of which were previously undescribed.[33][34] Mass spectrometry is ideally suited for such analyses using HCD or ETD fragmentation, as the addition of phosphorylation results in an increase in the mass of the protein and the phosphorylated residue. Advanced, highly accurate mass spectrometers are needed for these studies, limiting the technology to labs with high-end mass spectrometers. However, the analysis of phosphorylated peptides by mass spectrometry is still not as straightforward as for “regular”, unmodified peptides. Recently EThcD has been developed combining electron-transfer and higher-energy collision dissociation. Compared to the usual fragmentation methods, EThcD scheme provides more informative MS/MS spectra for unambiguous phosphosite localization.[35]