Photoplay is a dated term for a motion picture that can also refer to a type of novel popular during the silent era of Hollywood.

Photoplay was one of the first American film fan magazines. It was founded in 1911 in Chicago, the same year that J. Stuart Blackton founded Motion Picture Story, a magazine also directed at fans. For most of its run, Photoplay was published by Macfadden Publications.

Photoplay began as a short-fiction magazine concerned mostly with the plots and characters of films at the time and was used as a promotional tool for those films. In 1915, Julian Johnson and James R. Quirk became the editors (though Quirk had been vice president of the magazine since its inception), and together they created a format which would set a precedent for almost all celebrity magazines that followed. By 1918 the circulation exceeded 200,000, with the popularity of the magazine fueled by the public's increasing interest in the private lives of celebrities. 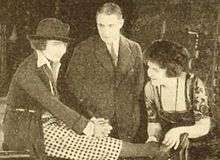 Still from the American film Her Lord and Master (1921), published on page 52 of Photoplay magazine.

Photoplay reached its apex in the 1920s and 1930s and was considered quite influential within the motion picture industry. The magazine was renowned for its artwork portraits of film stars on the cover by such artists as Earl Christy and Charles Sheldon. Macfadden Publications purchased the magazine in 1934. With the advancement of color photography, the magazine began using photographs of the stars instead by 1937.

Sidney Skolsky, a nationally syndicated gossip columnist for the New York Daily News and later the New York Daily Mirror had a regular column in Photoplay called "From A Stool At Schwab’s", the Hollywood drugstore he made famous, such was the magazine's popularity.[1][2]

Beginning in 1920, Photoplay gave out what is considered the first significant annual movie award, the Photoplay Medal of Honor.[3] An actual medallion produced by Tiffany & Co., it was voted on by the readers of the magazine and given to the producer of the year's best film, chosen with an emphasis on (according to Quirk) "the ideals and motives governing its production... the worth of its dramatic message." Though Photoplay only gave the single award for best film, its intentions and standards were influential on the Academy Awards founded later in the decade, and they overlap on Best Picture choices to some extent, though increasingly in the 1930s Photoplay's choices reflected its primarily female audience. By 1939 the Medal of Honor had declined in importance and the award was discontinued that year.

From 1944 to 1968, Photoplay awarded a Gold Medal for film of the year based on polling done by George Gallup's Audience Research Inc. through the 1950s, and then voted on by the magazine's readers. It also awarded Most Popular Male Star and Most Popular Female Star based on an actor and actress' popularity, not their performance. The awards were based on polling through the 1950s, and then on a vote by the readers, similar to the Gold Medal.[3] Bing Crosby and Greer Garson were frequently named the most popular film stars during the 1940s and later winners of the title included James Stewart, Jane Wyman, Alan Ladd, Marilyn Monroe, Rock Hudson and Kim Novak. Most popular television stars were also named in the 1960s. In 1948, the Photoplay Awards were broadcast on network television as part of The Steve Allen Plymouth Show.[4]

Photoplay merged with another fan magazine, Movie Mirror, in 1941; and with TV-Radio Mirror in 1977, when the name became Photoplay and TV Mirror. The magazine ceased publication in 1980[5] and its staff were moved to Us magazine.

A British version of Photoplay debuted in 1950, featuring an equal mix of American and British films and stars, and ceased publication in 1989.