The Academy Award for Best Picture is one of the Academy Awards presented annually since the awards debuted in 1929, by the Academy of Motion Picture Arts and Sciences (AMPAS) to producers working in the film industry and is the only category in which every member is eligible to submit a nomination. The actors or actresses in the film will not accept this award unless he or she produced the film.

Best Picture is considered the premier award of the Academy Awards, as it represents all the directing, acting, music composing, writing, editing, and other efforts put forth into a film production and receives much media attention. Since 1973, Best Picture is the final award at every Academy Awards ceremony.

The Grand Staircase columns at the Dolby Theatre in Los Angeles, where the Academy Awards ceremonies have been held since 2002, showcase every film that has won the Best Picture title since the award's inception.[1] As of 2016, there have been 528 films nominated for Best Picture.[2] 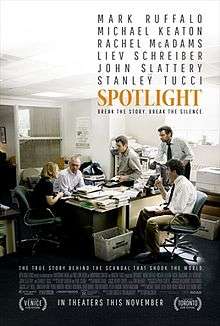 At the 1st Academy Awards ceremony (for 1927 and 1928), there were two categories of awards that were each considered the top award of the night: Outstanding Picture and Unique and Artistic Picture, the previous being won by the war epic Wings, and the latter by the art film Sunrise. Each award was intended to honor different and equally important aspects of superior filmmaking.

The following year, the Academy dropped the Unique and Artistic Picture award, and decided retroactively that the award won by Wings was the highest honor that could be awarded.[3] Though the award kept the title Outstanding Picture for the next ceremony, the name underwent several changes over the years as seen below. Since 1962 it has been called the Best Picture award.[2]

As of 2014, the "Special Rules for the Best Picture of the Year Award" limit recipients to those who meet two main requirements:[7]

The rules permit "bona fide team[s] of not more than two people to be considered to be a single 'producer' if the two individuals have had an established producing partnership for at least the previous five years and as a producing team have produced a minimum of five theatrically released feature motion pictures during that time.[7]

The Academy can make exceptions to the limit, as when the late Anthony Minghella and Sydney Pollack were posthumously included among the four producers nominated for The Reader.[8] As of 2014 the Producers Branch Executive Committee determines such exceptions, noting they take place only in "rare and extraordinary circumstance[s]."[7]

On June 24, 2009, AMPAS announced that the number of films to be nominated in the Best Picture award category would increase from five to ten, starting with the 82nd Academy Awards (2009).[10] The expansion was a throwback to the Academy's early years in the 1930s and 1940s, when eight to twelve films were nominated each year. "Having 10 Best Picture nominees is going to allow Academy voters to recognize and include some of the fantastic movies that often show up in the other Oscar categories but have been squeezed out of the race for the top prize," AMPAS President Sid Ganis said in a press conference. "I can't wait to see what that list of 10 looks like when the nominees are announced in February."[10]

At the same time, the voting system was switched from first-past-the-post to instant runoff voting (also known as preferential voting).[11] Two years after this change, the Academy revised the rule again so that the number of films nominated was between 5 and 10; nominated films must earn either 5% of first-place rankings or 5% after an abbreviated variation of the single transferable vote nominating process.[12] Bruce Davis, the Academy executive director at the time, said, "A Best Picture nomination should be an indication of extraordinary merit. If there are only eight pictures that truly earn that honor in a given year, we shouldn't feel an obligation to round out the number."[13]

Other points of contention include genres of film that have received few or no nominations or awards. Only three animated films have been nominated (Disney's Beauty and the Beast, (1991) and Disney-Pixar's Up (2009) and Toy Story 3 (2010) were nominated after the Academy expanded the number of nominees) and none have won. No science fiction film or superhero film has won (none of the latter has been nominated); only one fantasy film has won (The Lord of the Rings: The Return of the King, 2003). No light comedies have won since the 1970s. No documentary (eligible in a separate category) has been nominated for Best Picture.[15] This excludes Chang, which was nominated in the 'Unique and Artistic Production' category in the 1927/28 awards. Also, the superhero movie genre has yet to receive a nomination, despite containing some of the most highly acclaimed films in history, most notably The Dark Knight, whose rejection caused significant controversy and was potentially responsible for the Academy changing the maximum amount of nominees per year from five to ten.

Like the Academy Awards in general, the 'Best Picture' awardees have been criticized for disproportionately recognizing films about white men over those of women and/or people of color.[16] Of the films that have won Best Picture, only All About Eve, 1950; The Sound of Music, 1965; Terms of Endearment, 1983; Chicago, 2002; and Million Dollar Baby, 2004 have featured women exclusively in leading roles. Only five: In the Heat of the Night, 1967; Gandhi, 1982; The Last Emperor, 1987; Slumdog Millionaire, 2008; and 12 Years a Slave, 2013; have featured people of color exclusively in leading roles. No film featuring women of color exclusively in leading roles has won; only three: The Color Purple, 1985; Precious, 2009; and Beasts of the Southern Wild, 2012; have been nominated.

Another nominee, Broadway Melody of 1936, was a follow-up of sorts to previous winner The Broadway Melody. But, beyond the title and some music, there is no story connection to the earlier film. The Silence of the Lambs was adapted from the sequel novel to Red Dragon. The latter had been adapted for film as Manhunter by a different studio. Best Picture nominee The Lion in Winter features Peter O'Toole as King Henry II, a role he had played previously in the film Becket. But Winter is not a sequel to Becket. Clint Eastwood's Letters from Iwo Jima was a companion piece to his film Flags of Our Fathers, released earlier the same year. These two films depict the same battle from the different viewpoints of Japanese and United States military forces; the two films were shot back-to-back.

Notably, the only remake to win this category is The Departed. Mutiny on the Bounty and Ben-Hur were inspired and influenced by previous films of the same name; but they were considered to be distinctly different adaptations of the original novels. [17] Best Picture winner My Fair Lady was a musical version of George Bernard Shaw's 1913 play Pygmalion. It had previously been adapted for film as Pygmalion, which was nominated for Best Picture in 1938.

No Best Picture winner has been lost, though a few such as All Quiet on the Western Front and Lawrence of Arabia exist only in a form altered from their original, award-winning release form. This has usually been due to editing for reissue (and subsequently partly restored by archivists). Other winners and nominees, such as Tom Jones and Star Wars, are widely available only in subsequently altered versions. The Broadway Melody originally had some sequences photographed in two-color Technicolor. This footage survives only in black and white.[18]

The 1928 film The Patriot is the only Best Picture nominee that is lost.[19] The Racket, also from 1928, was believed lost for many years until a print was found in Howard Hughes' archives. It has since been restored and shown on Turner Classic Movies.[20] The only surviving complete prints of 1931's East Lynne and 1934's The White Parade exist within the UCLA film archive.[21]

In the list below, winners are listed first in the colored row, followed by the other nominees.[2] Except for the early years (when the Academy used a non-calendar year), the year shown is the one in which the film first premiered in Los Angeles County, California; normally this is also the year of first release, however, it may be the year after first release (as with Casablanca and, if the film-festival premiere is considered, Crash). This is also the year before the ceremony at which the award is given; for example, a film exhibited theatrically during 2005 was eligible for consideration for the 2005 Best Picture Oscar, awarded in 2006. The number of the ceremony (1st, 2nd, etc.) appears in parentheses after the awards year, linked to the article on that ceremony. Each individual entry shows the title followed by the production company, and the producer.

Until 1950, the Best Picture award was given to the production company; from 1951 on, it has gone to the producer or producers. The Academy used the producer credits of the Producers Guild of America (PGA) until 1998, when all five producers of Shakespeare in Love made speeches after its win.[4][5] A three-producer limit has been applied some years since.[5][6] There was controversy over the exclusion of some PGA-credited producers of Crash and Little Miss Sunshine.[6] The Academy can make exceptions to the limit, as when Anthony Minghella and Sydney Pollack were posthumously among the four nominated for The Reader.[8] However, now any producer on a film is nominated for Best Picture, so the limit of producer nominees is completely dropped.

For the first ceremony, three films were nominated for the award. For the following three years, five films were nominated for the award. This was expanded to eight in 1933, to ten in 1934, and to twelve in 1935, before being dropped back to ten in 1937. In 1945 it was further reduced to five. This number remained until 2009, when the limit was raised to ten and later adjusted in 2011, to vary between five and ten.

For the first six ceremonies, the eligibility period spanned two calendar years. For example, the 2nd Academy Awards presented on April 3, 1930, recognized films that were released between August 1, 1928, and July 31, 1929. Starting with the 7th Academy Awards, held in 1935, the period of eligibility became the full previous calendar year from January 1 to December 31.