This article is about the French region. For other uses, see Picardy (disambiguation).

Picardy (/ˈpɪkədɪ/; French: Picardie, French pronunciation: ​[pi.kaʁ.di]) is a historical territory and a former administrative region of France. Since 1 January 2016, it is part of the new region Hauts-de-France.[2] It is located in the northern part of France. 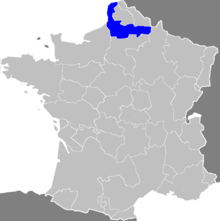 Map of the historical extent of Picardy within modern French borders

The historical province of Picardy stretched from north of Noyon to Calais, via the whole of the Somme department and the north of the Aisne department. The province of Artois (Arras area) separated Picardy from French Flanders.

From the 5th century the area was part of the Frankish Empire, and in the feudal period it encompassed the six countships of Boulogne, Montreuil, Ponthieu, Amiénois, Vermandois, and Laonnois.[3] According to the 843 Treaty of Verdun the region became part of West Francia, the later Kingdom of France.

The name "Picardy" (which may have referred to a Frankish tribe of picards or pike-bearers) was not used until the 12th or 13th century. During this time, the name applied to all lands where the Picard language was spoken, which included all the territories from Paris to the Netherlands.[4] In the Latin Quarter of Paris, people identified a "Picard Nation" (Nation Picarde) of students at Sorbonne University, most of whom actually came from Flanders.[5] During the Hundred Years' War, Picardy was the centre of the Jacquerie peasant revolt in 1358.

From 1419 onwards, the Picardy counties (Boulogne, Ponthieu, Amiens, Vermandois) were gradually acquired by the Burgundian duke Philip the Good, confirmed by King Charles VII of France at the 1435 Congress of Arras. In 1477, King Louis XI of France led an army and occupied key towns in Picardy.[6] By the end of 1477, Louis would control all of Picardy and most of Artois.[7]

In the 16th century, the government (military region) of Picardy was created. This became a new administrative region of France, separate from what was historically defined as Picardy. The new Picardy included the Somme département, the northern half of the Aisne département, and a small fringe in the north of the Oise département.

In 1557, Picardy was invaded by Habsburg forces under the command of Emmanuel Philibert, Duke of Savoy.[8] After a seventeen-day siege,[8] St. Quentin would be ransacked,[8] while Noyon would be burned by the Habsburg army.[9]

In the 17th century, an infectious disease similar to English sweat originated from the region and spread across France. It was called Suette des picards or Picardy sweat.[10]

Sugar beet was introduced by Napoleon I during the Napoleonic Wars in the 19th century, in order to counter the United Kingdom, which had seized the sugar islands possessed by France in the Caribbean. The sugar industry has continued to play a prominent role in the economy of the region.[11]

One of the most significant historical events to occur in Picardy was the series of battles fought along the Somme during World War I. From September 1914 to August 1918, four major battles, including the Battle of the Somme, were fought by British, French, and German forces in the fields of Northern Picardy.[12]

This painting by Pierre Puvis de Chavannes recalls the "Golden Age" in the history of the province of Picardy.[13] The Walters Art Museum.

Today, the modern region of Picardy no longer includes the coastline from Berck to Calais, via Boulogne (Boulonais), that is now in the Nord-Pas-de-Calais region, but does incorporate the pays of Beauvaisis, Valois, Noyonnais, Laonnois, Soissonnais, Omois, among other departments of France. The older definition of Picardy survives in the name of the Picard language, which applies not only to the dialects of Picardy proper, but also to the Romance dialects spoken in the Nord-Pas de Calais région, north of Picardy proper, and parts of the Belgian province of Hainaut. 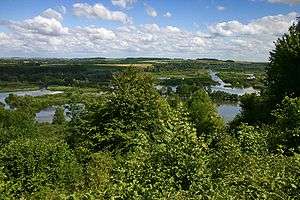 Between the 1990 and 1999 censuses, the population of Oise increased 0.61% per year (almost twice as fast as France as a whole), while the Aisne department lost inhabitants, and the Somme barely grew with a 0.16% growth per year. Today, 41.3% of the population of Picardy live inside the Oise department.

Picardy stretches from the long sand beaches of the Somme estuary in the west to the vast forests and pastures of the Thiérache in the east and down to the châteaux of Chantilly or Pierrefonds near the Paris Area and vineyards of the border with Champagne (Champagne picarde) to the south.

The president of the regional council is Claude Gewerc, a Socialist in office since 2004. That year he defeated longtime UDF incumbent Gilles de Robien.

Since 2008, the mayor of the city of Amiens, the regional capital, has been Socialist Gilles Demailly. He defeated longtime mayor Gilles de Robien of the New Centre party. 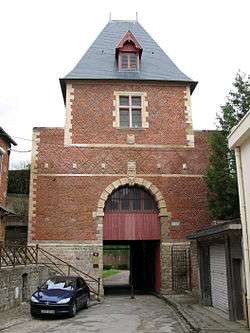 Distinctive brick building style demonstrated on a monument in the Somme, Picardy

Historically, the region of Picardy has a strong and proud cultural identity. The Picard (the local inhabitant and traditionally Picard language speakers) cultural heritage includes some of the most extraordinary Gothic churches (Amiens and Beauvais cathedrals or Saint-Quentin basilica), distinctive local cuisine (including ficelle picarde, flamiche aux poireaux, tarte au maroilles), beer (including from Péronne's de Clercq brewery) and traditional games and sports, such as the longue paume (ancestor of tennis), as well as danses picardes and its own bagpipes, called the pipasso.

The villages of Picardy have a distinct character, with their houses made of red bricks, often accented with a "lace" of white bricks. A minority of people still speak the Picard language, one of the languages of France, which is also spoken in Artois (Nord-Pas de Calais région). "P'tit quinquin", a Picard song, is a symbol of the local culture (and of that of Artois).

The Museum of Picardy, built between 1855 and 1867, houses a vast array of great works, spanning centuries. Archaeology from ancient Greece and Egypt to works of Pablo Picasso. The museum was built for the very reason it is used today. Although Picardy is one of the least-known regions in France, its influence from art and most certainly architecture is vivid throughout the world.[14] 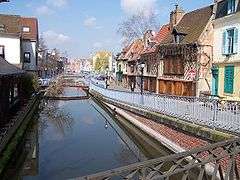