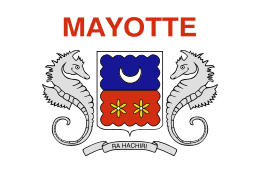 Mayotte (French: Mayotte, pronounced: [majɔt]; Shimaore: Maore, IPA: [maˈore]; Malagasy: Mahori) is an insular department and region of France officially named Département de Mayotte.[3] It consists of a main island, Grande-Terre (or Maore), a smaller island, Petite-Terre (or Pamanzi), and several islets around these two. The archipelago is located in the northern Mozambique Channel in the Indian Ocean off the coast of Southeast Africa, between northwestern Madagascar and northeastern Mozambique.

Mayotte's area is 374 square kilometres (144 sq mi) and, with its 212,645 people, is very densely populated at 569 per km² (1,473 per sq mi).[1] The biggest city and prefecture is Mamoudzou on Grande-Terre. However, the Dzaoudzi–Pamandzi International Airport is located on the neighbouring island of Petite-Terre. The territory is geographically part of the Comoro Islands. The territory is also known as Maore, the native name of its main island, especially by advocates of its inclusion in the Union of Comoros.

The island was populated from neighbouring East Africa with later arrival of Arabs, who brought the Islamic religion. A sultanate was established in 1500. In the 19th century, Mayotte was conquered by Andriantsoly, former king of Iboina on Madagascar, and later by the neighbouring islands Mohéli and then Anjouan before being purchased by France in 1841. The people of Mayotte voted to remain politically a part of France in the 1974 referendum. Mayotte became an overseas department on 31 March 2011 and became an outermost region of the European Union on 1 January 2014, following a 2009 referendum with an overwhelming result in favour of the department status.

The term Mayotte (or Maore) may refer to all of the department's islands, of which the largest is known as Maore (French: Grande-Terre) and includes Maore's surrounding islands, most notably Pamanzi (French: Petite-Terre), or only to the largest island.

The main island, Grande-Terre (or Maore), geologically the oldest of the Comoro Islands, is 39 kilometres (24 mi) long and 22 kilometres (14 mi) wide, and its highest point is Mount Benara, at 660 metres (2,165 ft) above sea level. Because of the volcanic rock, the soil is relatively rich in some areas. A coral reef encircling much of the island ensures protection for ships and a habitat for fish. Dzaoudzi was the capital of Mayotte (and earlier the capital of all the colonial Comoros) until 1977. It is situated on Petite-Terre (or Pamanzi), which at 10 square kilometres (4 sq mi) is the largest of several islets adjacent to Maore.

For the history of Mayotte before 1974, see History of the Comoros.

In 1500, the Maore or Mawuti (contraction of the Arabic جزيرة الموت Jazīrat al-Mawt – meaning island of death and corrupted to Mayotte in French) sultanate was established on the island. In 1503, Mayotte was observed by Portuguese explorers, but not colonized.

In 1832, Mayotte was conquered by Andriantsoly, former king of Iboina on Madagascar; in 1833, it was conquered by the neighbouring sultanate of Mwali (Mohéli island in French). On 19 November 1835, Mayotte was again conquered by the Ndzuwani Sultanate (Anjouan sultanate in French); a governor was installed with the unusual Islamic style of Qadi (from the Arabic قاض which means judge). However, in 1836 it regained its independence under a last local Sultan.

Mayotte was purchased by France in 1841. It was the only island in the archipelago that voted in referendums in 1974 and 1976 to retain its link with France and forgo independence (with 63.8% and 99.4% of votes respectively). The Comoros continue to claim the island. A draft 1976 United Nations Security Council resolution recognizing Comorian sovereignty over Mayotte, supported by 11 of the 15 members of the Council, was vetoed by France.[4] It was the last time, as of 2011, that France cast a lone veto in the Council.[5] The United Nations General Assembly adopted a series of resolutions on the issues, under the title "Question of the Comorian Island of Mayotte" up to 1995. Since 1995, the subject of Mayotte has not been discussed by the General Assembly. 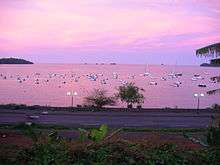 Mayotte became an overseas department of France in March 2011 in consequence of a 29 March 2009 referendum.[6] The outcome was a 95.5 per cent vote in favour of changing the island's status from a French "overseas community" to become France's 101st département.[7] Its non-official traditional Islamic law, applied in some aspects of the day-to-day life, will be gradually abolished and replaced by the uniform French civil code.[8] Additionally, French social welfare and taxes apply in Mayotte, though some of each will be brought in gradually.[9] Comoros continues to claim the island, while criticising the French military base there.[10]

The politics of Mayotte takes place in a framework of a parliamentary representative democratic French local government, whereby the President of the Departmental Council is the head of the local assembly, and of a multi-party system. Executive power is exercised by the French government.

The situation of Mayotte proved to be awkward for France: while the local population very largely did not want to be independent from France and join the Comoros, some international criticism from post-colonial leftist regimes was heard about Mayotte's ongoing ties to France. Furthermore, the peculiar local administration of Mayotte, largely ruled by customary Muslim law, would be difficult to integrate into the legal structures of France, not to mention the costs of bringing the standards of living to levels close to those of Metropolitan France. For these reasons, the laws passed by the national parliament had to state specifically that they applied to Mayotte for them to be applicable on Mayotte.

Mayotte became an overseas department of France (département d'outre-mer, DOM) on 31 March 2011 following the result of the March 2009 Mahoran status referendum, which was overwhelmingly approved by around 95% of voters.[11][12] Becoming an overseas department will mean it will adopt the same legal and social system as used in the rest of France. This will require abandoning some customary laws, adopting the standard French civil code, and reforming the judiciary, educational, social and fiscal systems, and will take place over a period of about 20 years.[13]

Despite its domestic constitutional evolution from the status of an overseas collectivity to that of an overseas department, effectively becoming a full constituent territory within the French Republic, with regards to the European Union, Mayotte remained an 'Overseas country and territory' (OCT) in association with the Union (as per Article 355(2) TFEU) and not a constituent territory of the European Union in the same way as the other four overseas departments. However following a directive of the European Council in December 2013, Mayotte became an outermost region of the European Union on 1 January 2014.[14] This successful agreement between the 27 member states follows a petition made by the French government for Mayotte to become an integral territory of the European Union nonetheless benefiting from the derogation clause applicable in existing Outermost regions, namely Article 349 TFEU, as favoured in a June 2012 European Commission opinion on Mayotte's European constitutional status.[15] 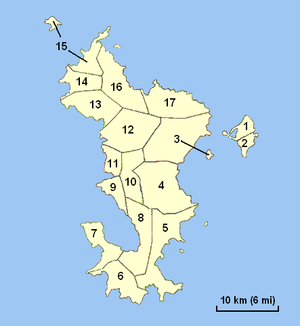 The official currency of Mayotte is the euro.[16]

As of the August 2012 census, there were 212,645 people living in Mayotte.[1] According to the 2007 census, 63.5% of the people living in Mayotte were born in Mayotte, 4.8% were born in the rest of the French Republic (either metropolitan France or overseas France except Mayotte), 28.3% were immigrants from the Comoros, 2.6% were immigrants from Madagascar, and the remaining 0.8% came from other countries.[17] 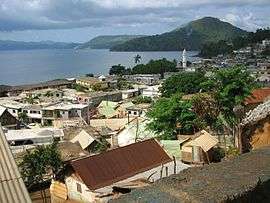 A view of Sada including mosque.

85,000 of the total 90,000 inhabitants of the island are Comorians. The Comorians are a blend of settlers from many areas: Iranian traders, mainland Africans, Arabs and Malagasy. Comorian communities can also be found in other parts of the Comoros chain as well as in Madagascar.

The main religious minority, Roman Catholicism, has no proper diocese but is served, together with the Comoros, by a missionary jurisdiction, the Apostolic Vicariate of Comoros Archipelago.

The native languages of Mayotte are:

Kibushi is spoken in the south and north-west of Mayotte, while Shimaore is spoken elsewhere.

Other non-native languages are also present in Mayotte:

French is the only official language of Mayotte. It is the language used for administration and the school system. It is the language most used on television and radio as well as in commercial announcements and billboards. In spite of this, knowledge of French in Mayotte is lower than in any other part of France.

A survey was conducted by the French Ministry of National Education in 2006 among pupils registered in CM2 (equivalent to fifth grade in the US and Year 6 in England and Wales). Questions were asked regarding the languages spoken by the pupils as well as the languages spoken by their parents. According to the survey, the ranking of mother tongues was the following (ranked by number of first language speakers in the total population; note that percentages add up to more than 100% because some people are natively bilingual):[21]

When also counting second language speakers (e.g. someone whose mother tongue is Shimaore but who also speaks French as a second language) then the ranking became:

With the mandatory schooling of children and the economic development both implemented by the French central state, the French language has progressed significantly on Mayotte in recent years. The survey conducted by the Ministry of National Education showed that while first and second language speakers of French represented 56.9% of the population in general, this figure was only 37.7% for the parents of CM2 pupils, but reached 97.0% for the CM2 pupils themselves (whose age is between 10 and 14 in general).

Nowadays there are instances of families speaking only French to their children in the hope of helping their social advancement. With French schooling and French language television, many young people turn to French or use many French words when speaking Shimaore and Kibushi, leading some to fear that these native languages of Mayotte could either disappear or become some sort of French-based creole.[22]

Approximately 25% of the adult population, and five times as many women as men, enter trance states in which they believe they are possessed by certain identifiable spirits who maintain stable and coherent identities from one possession to the next.[23]