For other uses, see Pillow (disambiguation). 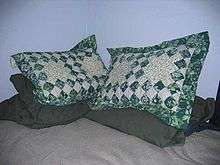 Decorated pillows piled on the corner of a bed 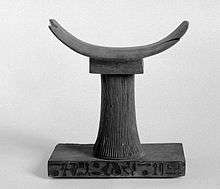 A pillow is used to sleep on and support the head/neck or other parts of the body while sleeping, lying down or sitting. In addition, pillows have decorative uses and are used on beds, couches or chairs; these are also referred to as cushions.[1][2]

In contemporary western culture pillows consist of a plain or patterned fabric envelope (pillowcase) which contains a soft stuffing, which may range from down feathers to synthetic foam. In other cultures, pillows have been made of wood or stone. Bed pillows are typically covered with a cloth pillowcase. Pillows used in a living room typically have a sturdy cloth cover.

There are also throw pillows[3] (also called toss pillows or pillow shams in different worldwide dialects of English), which are pillows that are mainly decorative and not designed for support or comfort. A cushion[3] is a soft bag filled with air or padding such as hollow fiber, feathers, foam or rubber. In the United Kingdom, pillows used on chairs and sofas are called cushions or throw cushions, with the word pillow used only for pillows on a bed. In the UK, cushions are usually square, while bed pillows are oblong.[4]

The word pillow comes from Middle English pilwe, from Old English pyle (akin to Old High German pfuliwi) and from Latin pulvinus. The first known use of the word pillow was before the 12th century.[5]

The first people to use pillows were those who lived in early civilizations of Mesopotamia around 7,000 BC.[6] During this time, only the wealthy used pillows.[6] The number of pillows symbolized status so the more pillows one owned the more affluence he or she held.[6] Pillows have long been produced around the world in order to help solve the reoccurring problem of neck, back, and shoulder pain while sleeping.[7] The pillow was also used to keep bugs and insects out of people's hair, mouth, nose, and ears while sleeping.[7]

Pillow use has been associated with the mummies and tombs of ancient Egypt dating back to 2055–1985 B.C.[8] Ancient Egyptian pillows were wooden or stone headrests.[8] These pillows were mostly used by placing them under the heads of the deceased because the head of a human was considered to be the essence of life and sacred.[8] The ancient Egyptians used these wooden or stone pillows in order to provide support to a corpse’s head, uphold body vigor, keep blood circulating, and keep demons away.[8]

The Romans and Greeks of ancient Europe mastered the creation of the softer pillow. These pillows were stuffed with reeds, feathers, and straw in order to make them softer and more comfortable.[9] Only upper-class people typically owned these softer pillows, however all classes of people were allowed to use some type of pillow while sleeping in order to give them support.[9] People in ancient Europe started to use pillows when going to church in order to kneel on while praying and to place holy books on.[10] This is a tradition that still lives on today. Additionally, the Romans and Greeks used their pillows by placing them under the head of those deceased just like the ancient Egyptians did.[9]

Chinese pillows were traditionally solid, though sometimes used with a softer fabric over them. Over many Chinese dynasties, pillows were made from a wide range of materials including bamboo, jade, porcelain, wood, and bronze.[11] Ceramic pillows became the most popular.[11] The use of the ceramic pillow first appeared in the Sui Dynasty between 581 and 618 while mass production appeared in the Tang Dynasty between 618 and 907.[11] The Chinese decorated their pillows by making them different shapes and by painting pictures of animals, humans, and plants on them.[11] One common type of pottery used was Cizhou ware. Chinese ceramic pillows reached their peak in terms of production and use during the Song, Jin, and Yuan dynasties between the 10th and 14th century, but slowly phased out during the Ming and Qing dynasties between 1368 and 1911 with the emergence of better pillow making materials.[11] 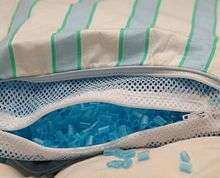 A Japanese pillow filled with plastic tubes in a mesh sack 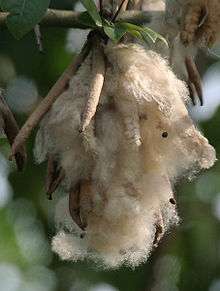 In India, traditional pillows are usually made with plant-borne materials, such as the fluffy, glossy fruit-fibres of silk-cotton tree (Ceiba pentandra (image) and Bombax ceiba)

Internally, a pillow consists of a filler, often made from foam, synthetic plastic fibers, feathers, or down and viscoelastic foam and latex.[5] Traditionally straw was a filler, but this is uncomfortable and rarely used today. Feathers and down are the most expensive and usually the most comfortable; they offer the advantage of softness and their ability to conform to shapes desired by the user, more so than foam or fiber pillows. One of the disadvantages of a down-filled pillow is allergic reaction of the user. There are currently hypoallergenic varieties of down pillows to allow people sensitive to down to enjoy the comfort of feather or down pillows. In Asia, buckwheat is a common filler, as are plastic imitations. Such pillows tend to be smaller than a standard pillow. In India, cotton is also a common filler and is considered to be healthier than synthetic fills.

The fill is surrounded with a cover or shell made of cloth, such as silk, known as the pillow case or pillow slip. Some pillows have a fancier cover called a sham which is closed on all sides and usually has a slit in the back through which the pillow is placed. Rectangular standard bed pillow cases usually do not have zippers, but instead have one side open all the time, however, a zippered pillow protector is often placed around standard pillows with the case in turn covering the protector. It is recommended that all types of pillow covers be laundered periodically since they are the part that is in contact with a person's body. But even with regular washing, pillows tend to accumulate dust and microbes among the fill and it is recommended that they be replaced every few years, especially for those with allergies.

A pillow is designed to provide support and comfort to the body and head. There are three main types of pillows; bed pillows, orthopedic pillows and decorative pillows, with some overlapping of use between these. The appropriate size of a bed pillow depends on the size of the bed. In general a twin bed goes best with a standard pillow while for queen and king sized beds larger pillows are recommended. 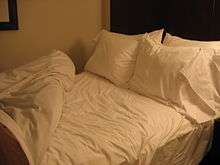 Several pillows on a bed

The classic bed pillow shape is usually a square or rectangle. In the US, they are common in these three sizes (in inches): Standard (20×26 inches), Queen (20×30 inches), and King (20×36 inches). In the US, a less common size is Jumbo (20×28 inches), which is larger than the Standard Size but smaller than the Queen Size.

Pillows are generally covered with a removable pillow case, which facilitates laundering. Apart from the color and from the material of which they are made, pillowcases are described by three characteristics:

Size conforms to the pillow the case is to contain. They are typically described as:

Square is also called continental in the UK. German pillow sizes are 80×80 cm (older) or 40×80 cm (newer). When considered as a subset of bed pillows, Euro pillows finish 26×26 in and older style travel pillows commonly finished 12×16 in.

The main distinguishing feature is whether the pillow case is plain or with a valance around the edge. In the former case this is described as 'plain style' and in the latter as 'Oxford style'.

"Oxford ... has a 5cm-10cm valance round all four sides. With a hemstitched or corded decoration around the inner edge of the valance."

The opening/closure of pillow cases ranges from the straightforward "bag style" common in the United States to the "housewife style" more common in Europe, with a pocket inside the open end to fully contain the pillow.

"Housewife is ... essentially a bag, with a flap in the open end to tuck the pillowcase behind to keep it in..."

Other methods of closure are ties or buttons/buttonholes.

A body pillow with a light blue pillow case

Body pillows are as long as a full adult body, providing support to the head and neck at the top and to the knees and legs lower down. This type of pillow can be especially useful in providing support for those who sleep on their sides and for pregnant women. Size is 40×140 cm. (See also: Dutch wife)

Neck pillows support the neck by providing a deep area for the head to rest and a supportive area to keep the neck in alignment with the spine while sleeping. These can also be known as cervical pillows. Cervical pillows help patients to maintain comfortable positioning after therapeutic, orthopedic and surgical measures. [12]

Travel pillows provide support for the neck in a sitting position. Their "U" shape fits around the back of the neck and keeps the head from slipping into an uncomfortable and possibly harmful position during sleep. However, U-shaped pillows can sometimes force the head forward, creating neck stiffness.

Donut pillows are firm pillows shaped like a torus, with a space in the middle to alleviate pressure on the tailbone area while sitting. These pillows are used primarily by individuals who have suffered an injury to the tailbone area, or who suffer pain from hemorrhoids or another ailment of the colon.

A pile of pillows on a couch

Decorative pillows serve a dual purpose. They often have fancy cover material which serves to decorate the room where they are found. Since decorative textiles are commonly 54 inches in width, many decorative pillows finish about 17x17 inches. (54/3 = 18 less seam allowance) When used to decorate a fully made up bed, decorative pillows are likely thrown aside at bedtime, since they are not covered with a washable pillow case, thus, while found on the bed, they are primarily there for decoration, hence they fall under this category. These pillows may be custom made, as well as made by freelancers.

Decorative pillows are also found on furnishings in more public parts of the home, such as sofas, chairs and window seats. Here, their common use may overlap both orthopedic and bed pillows. For example, unless a person has some particular medical condition, they will likely use a handy decorative pillow for lumbar support, as needed, while seated on a sofa. Likewise, for the occasional nap, decorative pillows are handy for supporting the head or neck, even though they may not be covered with a pillow case, as are bed pillows.

There are five common synonyms for decorative pillows which are descriptive of their use in the home. "Accent" pillows emphasize or accent some other part of the home decor. The terms "sofa pillow" and "couch pillow" refer to the place these decorative pillows are likely found. The terms "toss pillow" and "throw pillow" may refer to the way they generally arrive in their places.

Novelty pillows are shaped like humorous objects (a banana, tweety bird, a human leg, a chainsaw, a dill pickle, a former president) and are meant to brighten up and add humor to a room or lounge area.

Tent-flap pillows are placed at the front of a stack of pillows decorating a bed. "Tent flap" is the term used to describe a separate flap of fabric that is attached at the top of the pillow and folds down over the face. The tent flap can be loose or tacked down; if the flap is loose a decorative tassel or bead is usually used to weigh the flap down so it hangs properly.[13]

Floor pillows are another subset of decorative pillows. These pillows often finish 26×26 inches (one half of the width of the textile, less seam allowance) 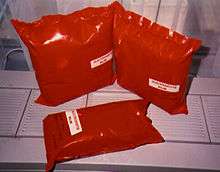