Sleeping while on duty 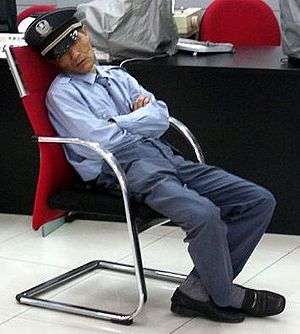 A security guard sleeping on duty

Sleeping while on duty or sleeping on the job refers to falling asleep while on the time clock or equivalent, or else while responsible for performing some active or passive job duty. While in some jobs, this is a minor transgression or not even worthy of sanctioning, in other workplaces, this is considered gross misconduct and may be grounds for disciplinary action, including possible termination of employment.[1][2] In other types of work, such as firefighting or live-in caregiving, sleeping at least part of the shift may be a part of the paid work time. While some employees who sleep while on duty in violation do so intentionally and hope not to get caught, others intend in good faith to stay awake, and accidentally doze.

Sleeping while on duty is such an important issue that it is addressed in the employee handbook in some workplaces.[3] Concerns that employers have may include the lack of productivity, the unprofessional appearance, and danger that may occur when the employee's duties involve watching to prevent a hazardous situation.[4] In some occupations, such as pilots, truck and bus drivers, or those operating heavy machinery, falling asleep while on duty could put lives in danger.

The frequency of sleeping while on duty that occurs varies depending on the time of day. Daytime employees are more likely to take short naps, while graveyard shift workers have a higher likelihood of sleeping for a large portion of their shift, sometimes intentionally.

A survey by the National Sleep Foundation has found that 30% of participants have admitted to sleeping while on duty.[5][6] More than 90% of Americans have experienced a problem at work because of a poor night's sleep. One in four admit to shirking duties on the job for the same reason, either calling in sick or napping during work hours.[7]

Employers have varying views of sleeping while on duty. Some companies have instituted policies to allow employees to take napping breaks during the workday in order to improve productivity[8] while others are strict when dealing with employees who sleep while on duty and use high-tech means, such as video surveillance, to catch their employees who may be sleeping on the job. Those who are caught in violation may face disciplinary action such as suspension or firing.

Some employees sleep, nap, or take a power-nap only during their allotted break time at work. This may or may not be permitted, depending on the employer's policies. Some employers may prohibit sleeping, even during unpaid break time, for various reasons, such as the unprofessional appearance of a sleeping employee, the need for an employee to be available during an emergency, or legal regulations. Employees who may endanger others by sleeping on the job may face more serious consequences, such as legal sanctions. For example, airline pilots risk loss of their licenses.

In some industries and work cultures sleeping at work is permitted and even encouraged. Such work cultures typically have flexible schedules, and variant work loads with extremely demanding periods where employees feel unable to spend time commuting. In such environments it is common for employers to provide makeshift sleeping materials for employees, such as a couch and/or inflatable mattress and blankets. This practice is particularly common in start-ups.[9] and during political campaigns. In those work cultures sleeping in the office is seen as evidence of dedication.

In 1968, New York police officers admitted that sleeping while on duty was customary.[10]

In Japan, the practice of napping in public, called inemuri (居眠り, lit. "present while sleeping"), may occur in work meetings or classes. Brigitte Steger, a scholar who focuses on Japanese culture, writes that sleeping at work is considered a sign of dedication to the job, such that one has stayed up late doing work or worked to the point of complete exhaustion, and may therefore be excusable.[11][12]