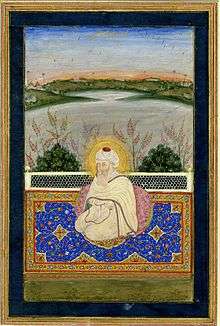 Pir Dastgir, from the Mughal era

Pir or Peer (Persian: پیر‎‎, literally "old [person]", "elder"[1]) is a title for a Sufi master or spiritual guide equally used in the nath tradition. They are also referred to as a Hazrat or Shaikh, which is Arabic for Old Man. The title is often translated into English as "saint" and could be interpreted as "Elder". In Sufism a Pir's role is to guide and instruct his disciples on the Sufi path. This is often done by general lessons (called Suhbas) and individual guidance. Other words that refer to a Pir include, Murshid (Arabic: مرشد‎‎, meaning "guide" or "teacher"), Sheikh and Sarkar (Persian word meaning Master, Lord).

The title Peer Baba (पीर बाबा) is common in Hindi used to give a salutation to Sufi masters or similarly honored persons. After their death people visit their tombs (dargah) (मकबरा).

The path of Sufism starts when a student takes an oath of allegiance with a teacher called Bai'ath or Bay'ah (Arabic word meaning "transaction") where he swears allegiance at the hands of his Pir and repents from all his previous sins. After that, the student is called a Murid (Arabic word meaning committed one). From here, his batin (inward) journey starts.

A Pir usually has authorizations to be a teacher for one (or more) Tariqahs (paths). A Tariqah may have more than one Pir at a time. A Pir is accorded that status by his Shaikh by way of Khilafat or Khilafah (Arabic word meaning succession). Khilafat is the process in which a Shaikh identifies one of his disciples as his successor (khalifah). A Pir can have more than one khalifah.