For other uses, see Dervish (disambiguation). 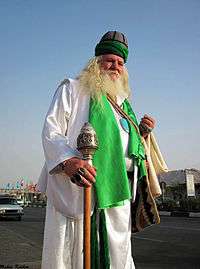 A dervish in Tehran 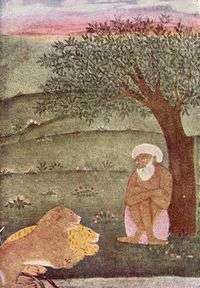 Dervish with a lion and a tiger, Mughal painting, c. 1650

A dervish or darvesh[1] (from Persian: درویش‎‎, Darvīsh[2] via Turkish,[3] Somali: Daraawiish, Arabic: درويش‎‎, Darwīš) is someone guiding a Sufi Muslim ascetic down a path or "Tariqah", known for their extreme poverty and austerity. Their[4] focus is on the universal values of love and service, deserting the illusions of ego to reach God. In most Sufi orders, a dervish is known to practice dhikr through physical exertions or religious practices to attain the ecstatic trance to reach God.[5] Their most common practice is Sama which is associated with Rumi.

"Dervish" is a Turkish word from the 1580's that is derived from the Persian word darvīsh.[6] It has been used in the same manner as the Arabic word "Faqir" to refer to Muslim holy men who have given up worldly for an austere and religious life. 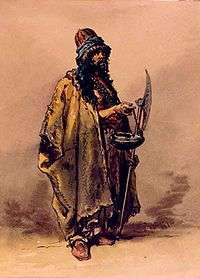 Many dervishes are mendicant ascetics who have taken a vow of poverty, unlike mullahs. The main reason they beg is to learn humility, but Dervishes are prohibited to beg for their own good. They have to give the collected money to other poor people. Others work in common professions; Egyptian Qadiriyya – known in Turkey as Kadiri – are fishermen, for example.

Some classical writers indicate that the poverty of the dervish is not merely economic. Saadi, for instance, who himself travelled widely as a dervish, and wrote extensively about them, says in his Gulistan:

Of what avail is frock, or rosary,

Rumi writes in Book 1 of his Masnavi:[8]

Water that's poured inside will sink the boat


While water underneath keeps it afloat.

Driving wealth from his heart to keep it pure
King Solomon preferred the title 'Poor':
That sealed jar in the stormy sea out there
Floats on the waves because it's full of air,
When you've the air of dervishood inside
You'll float above the world and there abide... 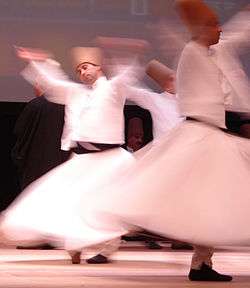 The whirling dance or Sufi whirling that is proverbially associated with dervishes is best known in the West by the practices (performances) of the Mevlevi order in Turkey, and is part of a formal ceremony known as the Sama. It is, however, also practiced by other orders. The Sama is only one of the many Sufi ceremonies performed to try to reach religious ecstasy (majdhb, fana). The name Mevlevi comes from the Persian poet Rumi, who was a dervish himself. This practice, though not intended as entertainment, has become a tourist attraction in Turkey.[9][10][11]

There are various orders of Dervishes, almost all of which trace their origins from various Muslim saints and teachers, especially Imam Ali. Various orders and suborders have appeared and disappeared over the centuries. Dervishes spread into North Africa, Turkey, the Balkans, the Caucasus, Iran, Pakistan, India, Afghanistan, and Tajikistan.

Other groups include the Bektashis, who are connected to the janissaries, and the Senussi, who are rather orthodox in their beliefs. Other fraternities and subgroups chant verses of the Qur'an, play drums or whirl in groups, all according to their specific traditions. They practice meditation, as is the case with most of the Sufi orders in South Asia, many of whom owe allegiance to, or were influenced by, the Chishti order. Each fraternity uses its own garb and methods of acceptance and initiation, some of which may be rather severe. 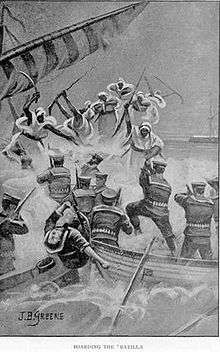 The Dervish State was an early 20th-century Somali Sunni Islamic state that was established by Mohammed Abdullah Hassan, a religious leader who gathered Somali soldiers from across the Horn of Africa and united them into a loyal army known as the Dervishes. This Dervish army enabled Hassan to carve out a powerful state through conquest of lands claimed by the Somali Sultans, the Ethiopians and the European powers. The Dervish State acquired renown in the Islamic and Western worlds due to its resistance against Britain and Italy. The Dervish State successfully repulsed British-led Somali and Ethiopian forces four times and forced them to retreat to the coastal region.[12] The polity also maintained relations with other authorities, receiving support from the Ottoman and German empires. The Turks also named Hassan Emir of the Somali nation,[13] and the Germans promised to officially recognize any territories the Dervishes were to acquire.[14] The Dervish State was finally defeated by the British in 1920.

Various western historical writers have sometimes used the term dervish rather loosely, linking it to, among other things, the Mahdist uprising in Sudan and other rebellions against colonial powers. In such cases, the term "Dervishes" may have been used as a generic (and often pejorative) term for the opposing Islamic entity and all members of its military, political and religious institutions, including persons who would not be considered "dervishes" in the strict sense.

For example, a contemporary British drawing of the fighting in Sudan was entitled "The defeat of the Dervishes at Toski" (see History of Sudan (1884–1898)#British response).