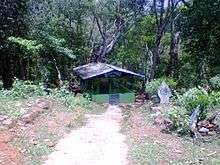 A dargah in Ooty Road, India 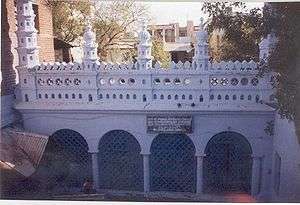 The dargah of Madurai Maqbara Hazrats, in the eponymous Madurai, Tamil Nadu, India 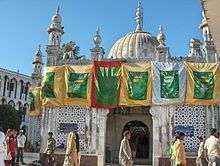 The dargah of Haji Ali, in Mumbai

A Dargah (Persian: درگاه‎‎ dargâh or درگه dargah, also in Urdu) is a shrine built over the grave of a revered religious figure, often a Sufi saint or dervish. Muslims may visit the shrine for ziyarat, a term associated with religious visits and pilgrimages. Dargahs are often associated with Sufi meeting rooms and hostels, called khanqah or hospices. They usually include a mosque, meeting rooms, Islamic religious schools (madrassas), residences for a teacher or caretaker, hospitals, and other buildings for community purposes.

Some Muslims do not believe in the practice of constructing over graves and turning them into places of worship, and consider it as associating partners to God or shirk, though visiting graves is encouraged.[1] Muhammad (according to some sects) forbade turning graves into places of worship.[2][3][4] but encouraged to visit the graves to remember life after death (sahih Muslim 977).[5]

Dargah is derived from a Persian word which literally means "portal" or "threshold". Some Sufi and other Muslims believe that dargahs are portals by which they can invoke the deceased saint's intercession and blessing (as per tawassul, also known as dawat-e-qaboor[6] or Ilm e dawat[7] Still others hold a less important view of dargahs, and simply visit as a means of paying their respects to deceased pious individuals or to pray at the sites for perceived spiritual benefits.

However, dargah is originally a core concept in Islamic Sufism and holds great importance for the followers of Sufi saints. Many Muslims believe their wishes are fulfilled after they offer prayer or service at a dargah of the saint they follow. Devotees tie threads of mannat (hope) at dargahs and contribute for langar and pray at dargahs. Dargahs dotted the landscape of Punjab even before the partition of the Indian Subcontinent.

Over time, musical offerings of dervishes and sheikhs in the presence of the devout at these shrines, usually impromptu or on the occasion of Urs, gave rise to musical genres like Qawwali and Kafi, wherein Sufi poetry is accompanied by music and sung as an offering to a murshid, a type of Sufi spiritual instructor. Today they have become a popular form of music and entertainment throughout South Asia, with exponents like Nusrat Fateh Ali Khan and Abida Parveen taking their music to various parts of the world.[8][9]

Throughout the non-Arab Muslim world

Sufi shrines are found in many Muslim communities throughout the world, except in Arab countries, and are called by many names. The term dargah is common in the Persian-influenced Islamic world, notably in Iran, Turkey and South Asia.

In South Asia, dargahs are often the site of festivals (Milad) held in honor of the deceased saint at the date of his Urs, which is a day dedicated to the saint which usually falls on the saint's death anniversary. The shrine is illuminated with candles or strings of electric lights at this time.

In China, the term gongbei is usually used for shrine complexes centered around a Sufi saint's tomb.

This is a practise started by medieval Muslims or Mughals during their reign in Indian subcontinent. This practise is nowhere found in Saudi Arabia, United Arab Emirates, Qatar, Kuwait, Iraq and other Arab countries where Muslim population is predominant. It started when non-Islamic cultural practices were adopted by some Muslims and the concept of venerating dead pious people by holding "festivals", signing, chanting, etc. were copied and applied in Islamic environments influenced by non-Islamic cultures - for example, Catholics would have days commemorating saints and holding festivities, etc. and so the concept was incubated and manifested itself in Sufi shrines and the activities thereof.

Experts of Sharia law have said that this ayah signifies the desirability of visiting Muhammad, testifies of the unanimity of opinions and point out that the striving to visit Muhammad has a great reward.[10] It is reported that Muhammad said:[11]

The Prophet prohibited visiting graves during a period of time when belief in fate was not yet settled and traditions of the era of ignorance were still being practiced. However, later he permitted it. The following is stated in a hadith:[12]

There are many reasons for which the Shī‘ah partake in the performance of Ziyarah, none of which include the worship of the people buried within the tombs - Ayatullah Borujerdi and Ayatullah Khomeini have both said:[13]

The Shī‘ah do however perform Ziyarah, believing that the entombed figures bear great status in the eyes of God, and seek to have their prayers answered through these people (a form of Tawassul) - Sayyid Muhammad Hasan Musawi writes:[14]

In this regard, Ibn Shu’ba al-Harrani also narrates a hadīth from the tenth Imām of the Twelver Shī‘as:[15]

The Ziyarah of the Imāms is also done by the Shī‘ah, not only as a means of greeting and saluting their masters who lived long before they were born, but also as a means of seeking nearness to God and more of His blessings (barakah).

The Shī‘ah do not consider the narrations in Bukhari to be authentic,[16] and argue that if things such as Ziyarah and Tawassul were innovations and shirk, Muhammad himself would have prohibited people as a precaution, from visiting graves, or seeking blessings through kissing the sacred black stone at the Ka‘bah.[17] Some Sunni scholars such as Ibn Taymiyyah,[18] have also rejected the notion that such things are innovations (bid‘ah).

It is popular Shi'i belief that to be buried near the burial place of the Imams is beneficial. In Shi'i sacred texts it is stated that the time between death and resurrection (barzakh, purgatory) should be spent near the Imams.[19]

Building tombs over graves and turning them into places of worship is considered shirk, associating or invoking to others besides God.[20][21] In the Quran:[22]