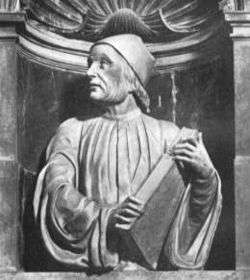 Marsilio Ficino (Italian: [marˈsiːljo fiˈtʃiːno]; Latin name: Marsilius Ficinus; 19 October 1433 – 1 October 1499) was an Italian scholar and Catholic priest who was one of the most influential humanist philosophers of the early Italian Renaissance. He was also an astrologer, a reviver of Neoplatonism in touch with every major academic thinker and writer of his day and the first translator of Plato's complete extant works into Latin. His Florentine Academy, an attempt to revive Plato's Academy, had some influence on the direction and tenor of the Italian Renaissance and the development of European philosophy.

Ficino was born at Figline Valdarno. His father Diotifeci d'Agnolo was a physician under the patronage of Cosimo de' Medici, who took the young man into his household and became the lifelong patron of Marsilio, who was made tutor to his grandson, Lorenzo de' Medici. Giovanni Pico della Mirandola, the Italian humanist philosopher and scholar was another of his students.

During the sessions at Florence of the Council of Ferrara-Florence in 1438–1445, during the failed attempts to heal the schism of the Orthodox and Catholic churches, Cosimo de' Medici and his intellectual circle had made acquaintance with the Neoplatonic philosopher George Gemistos Plethon, whose discourses upon Plato and the Alexandrian mystics so fascinated the learned society of Florence that they named him the second Plato. In 1459 John Argyropoulos was lecturing on Greek language and literature at Florence, and Ficino became his pupil.

When Cosimo decided to refound Plato's Academy at Florence he chose Ficino as its head. In 1462, Cosimo supplied Ficino with Greek manuscripts of Plato's work, whereupon Ficino started translating the entire corpus to Latin[1] (draft translation of the dialogues finished 1468–9;[2] published 1484). Ficino also produced a translation of a collection of Hellenistic Greek documents found by Leonardo da Pistoia and called Hermetica, later called the Hermetic Corpus – particularly the "Corpus Hermeticum" of Hermes Trismegistos,[3] and the writings of many of the Neoplatonists, for example Porphyry, Iamblichus, Plotinus, et al. Ficino tried to synthesize Christianity and Platonism.

Among his many students was Francesco Cattani da Diacceto, who was considered by Ficino to be his successor as the head of the Florentine Platonic Academy.[4] Diacceto's student, Giovanni di Bardo Corsi, produced a short biography of Ficino in 1506.[5] 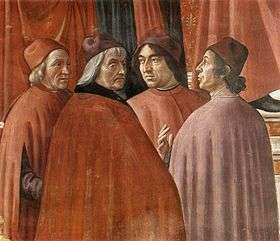 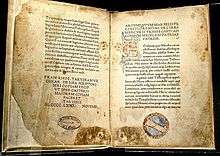 Ficino's main original work was his treatise on the immortality of the soul (Theologia Platonica de immortalitate animae). In the rush of enthusiasm for every rediscovery from Antiquity, he exhibited a great interest in the arts of astrology, which landed him in trouble with the Roman Catholic Church. In 1489 he was accused of magic before Pope Innocent VIII and needed strong defense to preserve him from the condemnation of heresy.

Writing in 1492 Ficino proclaimed: "This century, like a golden age, has restored to light the liberal arts, which were almost extinct: grammar, poetry, rhetoric, painting, sculpture, architecture, music ... this century appears to have perfected astrology."

Ficino's letters, extending over the years 1474–1494, survive and have been published. He also wrote De amore (1484) and the influential De vita libri tres (Three books on life.) De vita, published in 1489, provides a great deal of curious contemporary medical and astrological advice for maintaining health and vigor, as well as espousing the Neoplatonist view of the world's ensoulment and its integration with the human soul:

There will be some men or other, superstitious and blind, who see life plain in even the lowest animals and the meanest plants, but do not see life in the heavens or the world ... Now if those little men grant life to the smallest particles of the world, what folly! what envy! neither to know that the Whole, in which 'we live and move and have our being,' is itself alive, nor to wish this to be so.[9]

One metaphor for this integrated "aliveness" is Ficino's astrology. In the Book of Life, he details the interlinks between behavior and consequence. It talks about a list of things that hold sway over a man's destiny.

Probably due to early influences from his father Diotifeci, who was a doctor to Cosimo de' Medici, Ficino published Latin and Italian treatises on medical subjects such as Consiglio contro la pestilenza (Recommendations for the treatment of the plague) and De vita libri tres (Three books on life). His medical works exerted considerable influence on Renaissance physicians such as Paracelsus, with whom he shared the perception on the unity of the micro- and macrocosmos, and their interactions, through somatic and psychological manifestations, with the aim to investigate their signatures to cure diseases. Those works, which were very popular at the time, dealt with astrological and alchemical concepts. Thus Ficino came under the suspicion of heresy; especially after the publication of the third book in 1489, which contained specific instructions on healthful living.[10]

Ficino introduced the term and concept of "platonic love" in the West. It first appeared in a letter to Alamanno Donati in 1476, but was later fully developed all along his work, mainly his famous De amore. He also practiced this love metaphysic with Giovanni Cavalcanti, whom he made the principal character in his commentary on the Convivio, and to whom he wrote ardent love letters in Latin that were published in his Epistulae in 1492; there are also numerous other indications to suggest that Ficino's erotic impulses were directed exclusively towards men. After his death his biographers had a difficult task trying to refute those who spoke of his homosexual tendencies. But his sincere and deep faith, and membership of the clergy, put him beyond the reach of gossip, and while praising love for the same sex, he also condemned sodomy in the Convivium.[11][12]

Ficino died on 1 October 1499 at Careggi. In 1521 his memory was honored with a bust sculpted by Andrea Ferrucci, which is located in the south side of the nave in the Cathedral of Santa Maria del Fiore. 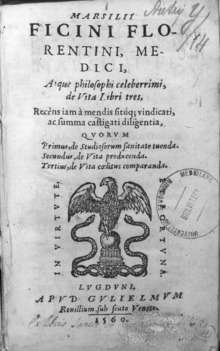 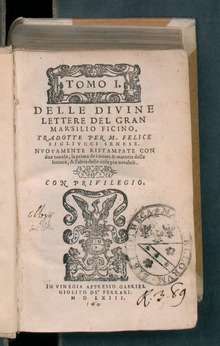