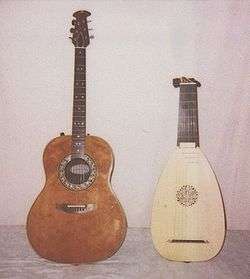 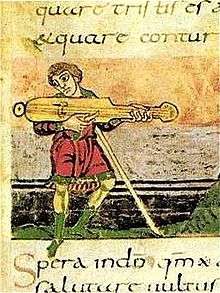 This illustration in a French Psalter from the 9th century (c. 830) shows an unspecified plucked string instrument. 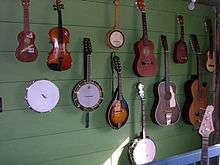 Stringed instruments hanging on a wall. Shown here are 4 Lookoeos, 2 mandolins, a banjo, a guitar, a violin, a Guraitar and a bass guitar.

Most plucked string instruments belong to the lute family (such as guitar, bass guitar, mandolin, banjo, balalaika, sitar, pipa, etc.), which generally consist of a resonating body, and a neck; the strings run along the neck and can be stopped at different pitches. The zither family (including the autoharp, kantele, gusli, kannel, kankles, kokle, koto, guqin, gu zheng and many others) does not have a neck, and the strings are stretched across the soundboard. In the harp family (including the lyre), the strings are perpendicular to the soundboard and do not run across it. The harpsichord does not fit any of these categories but is also a plucked string instrument, as its strings are struck with a plectrum when the keys are depressed.

Plucked string instruments are not a category in the Sachs-Hornbostel classification, as some of them are simple chordophones and others are composite (depending on whether the resonator is the removable part of the instrument).