This article is about the bow as a musical instrument. For the bow used to play another instrument, see Bow (music).

The musical bow (bowstring or string bow) is a simple string musical instrument part of a number of South African cultures, also found in other places in the world through the result of slave trade. It consists of a flexible, usually wooden, stick 1.5 to 10 feet (0.5 to 3 m) long, and strung end to end with a taut cord, usually metal. It can be played with the hands or a wooden stick or branch. Often, it is a normal archery bow used for music.

Although the bow is now thought of as a weapon, it is not clear whether it was used in this way originally. A cave painting in the Trois Frères cave of southern France, dated to around 13,000 BCE, displays a bow being used as a musical instrument, so this use certainly has a long history.[2] Musical bows are still used in a number of cultures today. It can be found as far south as Swaziland, and as far east as eastern Africa, Madagascar, and Réunion. and also outside of Africa, as in the case of berimbau, malunga (derivations of the African musical bow) or the Appalachian mouth-bow.

The usual way to make the bow sound is to pluck the string, although sometimes a subsidiary bow is used to scrape the string, much as on a violin. The Onavillu of Kerala sounds when struck with a thin stick. Unlike string instruments used in classical music, however, they do not have a built-in resonator, although resonators may be made to work with the bow in a number of ways.

The most usual type of resonator consists of a gourd attached to the back of the string bearer. The bow may also be stood in a pit or gourd on the ground, or one end of it may be partially placed in the mouth. This last method allows the size of the resonator to be varied as the instrument is played, thus allowing a melody to be heard consisting of the notes resonating in the player's mouth. As well as these various forms of resonators, the bow is frequently played without a resonator at all.

In Africa the musical bow is usually played by a solo performer. In Capoeira, the berimbau is played as part of the roda, a musical group standing in a circle, in the centre of which the Capoeiristas perform or play. The Appalachian mouth-bow can be played amplified in old-time music jams.

Due to the nature of their construction and playing, musical bows are quiet instruments, therefore needing a resonator to resound. The resonator can either be a gourd (as in uhadi, umakhweyana, segankure, xitende, berimbau, etc.) or the player's mouth (as in umrhubhe, umqangala, tshihwana, xizambi, etc.)

Musical bows are the main instruments of the Nguni and Sotho people, the predominant peoples of South Africa. Historians believe that many of the musical bows came from Khoisan peoples. Although there are many differences between musical bows, all of them share two things: a resonator, and at least two fundamental notes.

There are at least two fundamental notes produced by all musical bows, an open (when the player does not shorten it or touch it) and a closed (where the string is shortened or stopped by the player's hand). In Xhosa they are called vu (from the word Vuliwe, 'open') and ba (from Banjiwe, 'held') respectively. These two notes can already be on the string, if it is divided or stopped by a string attached to the gourd, as in the case of umakhweyana, xitende, berimbau, hungu, etc. The pitch difference between a vu and a ba is usually about a whole tone. In certain places in can be closer to a semitone (e.g. Zulu) or closer to a minor third (Tsonga).

Some of those instruments have more than two notes, for example the Zulu umakhweyana and the Tsonga xitende have three, whereas the Venda tshihwana has four.[3]

Musical bows are known by various names in the different languages of South Africa - some refer only to musical bows using gourds as resonators, others using the mouth:[3][4] 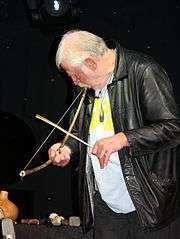 The most popular musical bow today is the Brazilian adaptation of the musical bow, the berimbau, most commonly associated with the jogo de capoeira.

Malunga, a musical bow made of bamboo, gut strings, and a coconut gourd is used by the Siddi people of India, of African origin.

Belembaotuyan is found in Guam, probably introduced through trade between South America and Asia in the nineteenth century.

Kunkulkawe is the name of a musical bow found among the Mapuche people in Chile and Argentina.

In the United States a musical bow is primarily found in the Appalachian Mountains, where it is called a mouthbow or mouth bow.

In Northwestern Mexico, the Tepehuán Indians of Durango use the musical bow during their mitote. The Tepehuán's musical bow has a gourd attached to it.

The ku is a Maori instrument from New Zealand, made of matai wood and a fibre string, and is tapped with a rod.[5]