For other uses, see Plumbago (disambiguation).

Plumbago is a genus of 10-20 species of flowering plants in the family Plumbaginaceae, native to warm temperate to tropical regions of the world. Common names include plumbago and leadwort (names which are also shared by the genus Ceratostigma). The generic name, derived from the Latin words plumbum ("lead") and agere ("to resemble"), was first used by Pliny the Elder (23-79) for a plant known as μολυβδαινα (molybdaina) to Pedanius Dioscorides (ca. 40-90).[2][3] This may have referred to its lead-blue flower colour, the ability of the sap to create lead-colored stains on skin,[4] or Pliny's belief that the plant was a cure for lead poisoning.[5] 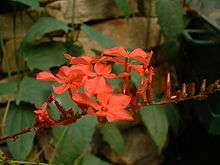 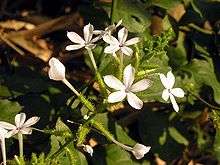 The species include herbaceous plants and shrubs growing to 0.5–2 m (1.6–6.6 ft) tall. The leaves are spirally arranged, simple, entire, 0.5–12 cm (0.20–4.72 in) long, with a tapered base and often with a hairy margin. The flowers are white, blue, purple, red, or pink, with a tubular corolla with five petal-like lobes; they are produced in racemes.

The flower calyx has glandular trichomes (hairs), which secrete a sticky mucilage that is capable of trapping and killing insects; it is unclear what the purpose of these trichomes is; protection from pollination by way of "crawlers" (ants and other insects that typically do not transfer pollen between individual plants), or possible protocarnivory.[6]

Mature plumbago leaves often have a whitish residue on their undersides, a feature that can confuse gardeners. While this white material resembles a powdery mildew disease or a chemical spray deposit, it is actually a natural exudate from “chalk” glands that are found on the plumbago species. [7]