The Pons Aemilius (Italian: Ponte Emilio), today called Ponte Rotto, is the oldest Roman stone bridge in Rome, Italy. Preceded by a wooden version, it was rebuilt in stone in the 2nd century BC. It once spanned the Tiber, connecting the Forum Boarium with Trastevere; a single arch in mid-river is all that remains today, lending the bridge its name Ponte Rotto ("Broken bridge").

The oldest piers of the bridge were probably laid when the Via Aurelia was constructed in the mid-2nd century BC.[1] Titus Livius recorded that a bridge in the same location existed in 192 BC. The first stone bridge was constructed by Censor Marcus Fulvius Nobilior in the year 179 BC, although it was not completed until 151 BC.[2] The bridge's piers date from this early period, although its arches were constructed in 142 BC.[3] The bridge kept its place for several hundred years, although it was repaired and rebuilt both by Augustus,[4] and later by Emperor Probus in 280 AD. 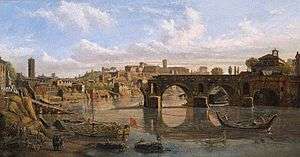 After the collapse of the Roman Empire, the bridge was damaged several times by floods, with each flood taking a greater and greater toll on the overall structure. It was first severely damaged in 1230 AD, after which it was rebuilt by Pope Gregory XI.[2] Later, the bridge was more seriously damaged by the flood of 1557, but again was later rebuilt by Pope Gregory XIII; the remnants of the bridge today still bear Latin inscriptions detailing Gregory XIII's renovation of the bridge.[5] Finally, floods in 1575 and 1598 carried the eastern half away, resulting in its abandonment as a functioning bridge for several centuries.[2][6] For many years, it was used as a fishing pier.[7] In 1853, Pope Pius IX had the remnants of the bridge connected to the mainland via an iron footbridge, but the heavy metal weakened the structural integrity of the stone.[2][7] The remaining half was demolished in 1887 to make room for the Ponte Palatino, leaving behind only one arch that remains to this day.[6]