Pope Cyril VI was born in Damanhour, Egypt, into a Coptic Orthodox family. He resigned a civil service position to become a monk in July 1927 (Paoni–Epip 1643). He passed his probationary period and, on 24 February 1928 (21 Meshir 1644), took his monastic vows at the Paromeos Monastery, assuming the name of Father Mina el-Baramosy (Father Mina of the Paromeos Monastery). He was also known as Father Mina the elder. 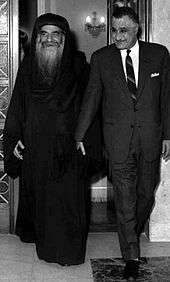 Father Mina became Pope of Alexandria on 10 May 1959 (2 Pashons 1675). In accordance with the old Coptic church tradition, Pope Cyril VI was the only monk in the 20th century A.D./17th century A.M. to be chosen for papacy without having been a bishop /Metropolitan first. Before him, there were three bishops / Metropolitans who became Popes of Alexandria: Pope John XIX (1928–1942), Pope Macarius III (1942–1944) and Pope Joseph II (1946-1956). After him, Pope Shenouda III was also a bishop before becoming Pope.[2]

Pope Cyril VI elevated the Archbishop of the Ethiopian Orthodox Tewahedo Church to the title of Patriarch-Catholicos. Abuna Basilios, who was the first Ethiopian to be appointed Archbishop of Ethiopia by Pope Joseph II, became Ethiopia's first Patriarch. Pope Cyril VI was awarded the Grand Cordon of the Star of Solomon by Emperor Haile Selassie in gratitude. In November 1959 he laid the foundation stone of the new Monastery of Saint Mina in the Desert of Mariout.

Pope Cyril VI of Alexanderia in the Ethiopian court

In January 1965 (Koiak–Tobi 1681), Pope Cyril VI presided over the Committee of Oriental Orthodox Churches in Addis Ababa, the first ecumenical and non-Chalcedonian synod of these churches held in modern times.

In June 1968 (Pashons–Paoni 1684), Pope Cyril received the relics of Saint Mark the Evangelist and Apostle, which had been taken from Alexandria to Venice over eleven centuries earlier. The relics were interred beneath the newly completed Cathedral of Saint Mark in Cairo, which was built under Pope Cyril and was inaugurated in a ceremony attended by President Nasser, Emperor Haile Selassie, and delegates from most other churches.

Pope Cyril died on 9 March 1971 (30 Meshir 1687), after a short illness. Pope Shenouda III spoke about his predecessor: "There is no man in all the history of the church like Pope Cyril VI, who was able to pray so many liturgies. He prayed more than 12,000 liturgies. This matter never happened before in the history of the Popes of Alexandria or the world, or even among the monks. He was wondrous in his prayers." On 20 June 2013 (13 Paoni 1729), 42 years after his death, he was canonised as a saint by the Holy Synod of the Coptic Orthodox Church.[5]