Ignatius of Antioch (ancient Greek: Ἰγνάτιος Ἀντιοχείας, Ignátios Antiokheías) (c. 35  – c. 108),[1][2] also known as Ignatius Theophorus (Ιγνάτιος ὁ Θεοφόρος, Ignátios ho Theophóros, lit. "the God-bearing"), Ignatius Nurono (lit. "The fire-bearer") was an Apostolic Father, student of the Apostle John, and the third bishop of Antioch.[3][4] En route to Rome, where according to Christian tradition he met his martyrdom, he wrote a series of letters which have been preserved as an example of very early Christian theology. Important topics addressed in these letters include ecclesiology, the sacraments, and the role of bishops. In speaking of the authority of the Church,[5] he coined the phrase "Catholic Church",[6] still in use to this day.

Ignatius converted to Christianity[7] at a young age. Later in his life he was chosen to serve as a Bishop of Antioch, succeeding Saint Peter and St. Evodius (who died around AD 67). The 4th-century Church historian Eusebius records that Ignatius succeeded Evodius.[8] Making his apostolic succession even more immediate, Theodoret of Cyrrhus reported that St. Peter himself left directions that Ignatius be appointed to the episcopal see of Antioch.[9] Ignatius called himself Theophorus (God Bearer). A tradition arose that he was one of the children whom Jesus took in his arms and blessed.[3] Tradition also identifies Ignatius, along with his friend Polycarp, as disciples of John the Apostle.[10]

Epistles attributed to Ignatius report his arrest by the authorities and travel to Rome:

From Syria even to Rome I fight with wild beasts, by land and sea, by night and by day, being bound amidst ten leopards, even a company of soldiers, who only grow worse when they are kindly treated.
— Ignatius to the Romans, 5.

The ship made a number of stops along the shores of Asia Minor on the way to Rome. At Smyrna he met Bishop Polycarp.[9] Along the route he wrote six letters to the churches in the region and one to a fellow bishop. According to Christian tradition, he was sentenced to die at the Colosseum.[11] In his Chronicle, Eusebius gives the date of Ignatius's death as AA 2124 (2124 years after Abraham), i.e. the 11th year of Trajan's reign, AD 108.[12]

According to Christian legend, after Ignatius' martyrdom in the Circus Maximus his remains were carried back to Antioch by his companions and were interred outside the city gates. The reputed remains of Ignatius were moved by the Emperor Theodosius II to the Tychaeum, or Temple of Tyche, which had been converted into a church dedicated to Ignatius. In 637 the relics were transferred to the Basilica di San Clemente in Rome.

Ignatius' feast day was kept in his own Antioch on 17 October, the day on which he is now celebrated in the Catholic Church and generally in western Christianity, although from the 12th century until 1969 it was put at 1 February in the General Roman Calendar.[13][14] 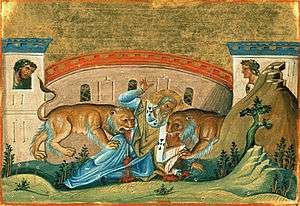 Painting of Ignatius of Antioch from the Menologion of Basil II (c. 1000 AD)

The following seven letters preserved under the name of Ignatius are generally considered authentic as they were mentioned by the historian Eusebius in the first half of the fourth century.

Writing in 1886, Dr. William P. Killen regarded all the Ignatian epistles, beginning with that to the Romans, as having been pseudepigraphically composed in the early 3rd century. His reasons included their episcopal emphasis, which is otherwise unknown before the reign of Callistus, the Bishop of Rome around 220. Most scholars, however, accept at least the two Ignatian epistles which were referenced by Origen,[16] and believe that by the 5th century, this collection had been enlarged by spurious letters. The original text of six of the seven authentic letters are found in the Codex Mediceo Laurentianus written in Greek in the 11th century (which also contains the pseudepigraphical letters of the Long Recension, except that to the Philippians),[17] while the letter to the Romans is found in the Codex Colbertinus.[10] Some of the original letters were, at one point, believed to had been changed with interpolations. The oldest is known as the "Long Recension" which dates from the latter part of the fourth century.[10] These were created to posthumously enlist Ignatius as an unwitting witness in theological disputes of that age, but that position was vigorously combated by several British and German critics, including the Catholics Denzinger and Hefele, who defended the genuineness of the entire seven epistles.[10] At the same time, the purported eye-witness account of his martyrdom is also thought to be a forgery from around the same time. A detailed but spurious account of Ignatius' arrest and his travails and martyrdom is the material of the Martyrium Ignatii which is presented as being an eyewitness account for the church of Antioch, and attributed to Ignatius' companions, Philo of Cilicia, deacon at Tarsus, and Rheus Agathopus, a Syrian.

Although James Ussher regarded it as genuine, if there is any genuine nucleus of the Martyrium, it has been so greatly expanded with interpolations that no part of it is without questions. Its most reliable manuscript is the 10th-century Codex Colbertinus (Paris), in which the Martyrium closes the collection. The Martyrium presents the confrontation of the bishop Ignatius with Trajan at Antioch, a familiar trope of Acta of the martyrs, and many details of the long, partly overland voyage to Rome. The Synaxarium of the Coptic Orthodox Church of Alexandria says that he was thrown to the wild beasts that devoured him and rent him to pieces.[4]

Ignatius's letters proved to be important testimony to the development of Christian theology, since the number of extant writings from this period of Church history is very small. They bear signs of being written in great haste and without a proper plan, such as run-on sentences and an unsystematic succession of thought.

Ignatius modeled his writings after Paul, Peter, and John, and even quoted or paraphrased their own works freely, such as when he quoted 1 Cor 1:18, in his letter to the Ephesians: "Let my spirit be counted as nothing for the sake of the cross, which is a stumbling-block to those that do not believe, but to us salvation and life eternal." - Letter to the Ephesians 18, Roberts and Donaldson translation[18]

Ignatius is known to have taught the deity of Christ:

There is one Physician who is possessed both of flesh and spirit; both made and not made; God existing in flesh; true life in death; both of Mary and of God; first passible and then impassible, even Jesus Christ our Lord. —Letter to the Ephesians, ch. 7, shorter version, Roberts-Donaldson translation

Though this is less clear in the interpolated text of the 4th Century Long Recension:

But our Physician is the Only true God, the unbegotten and unapproachable, the Lord of all, the Father and Begetter of the only-begotten Son. We have also as a Physician the Lord our God, Jesus the Christ, the only-begotten Son and Word, before time began, but who afterwards became also man, of Mary the virgin. For "the Word was made flesh." Being incorporeal, He was in the body, being impassible, He was in a passible body, being immortal, He was in a mortal body, being life, He became subject to corruption, that He might free our souls from death and corruption, and heal them, and might restore them to health, when they were diseased with ungodliness and wicked lusts. Letter to the Ephesians, ch. 7, longer version

He stressed the value of the Eucharist, calling it a "medicine of immortality" (Ignatius to the Ephesians 20:2). The very strong desire for bloody martyrdom in the arena, which Ignatius expresses rather graphically in places, may seem quite odd to the modern reader. An examination of his theology of soteriology shows that he regarded salvation as one being free from the powerful fear of death and thus to bravely face martyrdom.[19]

Ignatius is claimed to be the first known Christian writer to argue in favor of Christianity's replacement of the Sabbath with the Lord's Day:

Be not seduced by strange doctrines nor by antiquated fables, which are profitless. For if even unto this day we live after the manner of Judaism, we avow that we have not received grace ... If then those who had walked in ancient practices attained unto newness of hope, no longer observing Sabbaths but fashioning their lives after the Lord's day, on which our life also arose through Him and through His death which some men deny ... how shall we be able to live apart from Him? ... It is monstrous to talk of Jesus Christ and to practise Judaism. For Christianity did not believe in Judaism, but Judaism in Christianity — Ignatius to the Magnesians 8:1, 9:1-2, 10:3, Lightfoot translation.

Ignatius is the earliest known Christian writer to emphasize loyalty to a single bishop in each city (or diocese) who is assisted by both presbyters (elders) and deacons. Earlier writings only mention either bishops or presbyters, or use these terms apparently interchangeably,[20] and many texts give the impression that there was usually more than one bishop per congregation.

For instance, his writings on bishops, presbyters and deacons:

Take care to do all things in harmony with God, with the bishop presiding in the place of God, and with the presbyters in the place of the council of the apostles, and with the deacons, who are most dear to me, entrusted with the business of Jesus Christ, who was with the Father from the beginning and is at last made manifest — Letter to the Magnesians 2, 6:1

He is also responsible for the first known use of the Greek word katholikos (καθολικός), meaning "universal", "complete" and "whole" to describe the church, writing:

Wherever the bishop appears, there let the people be; as wherever Jesus Christ is, there is the Catholic Church. It is not lawful to baptize or give communion without the consent of the bishop. On the other hand, whatever has his approval is pleasing to God. Thus, whatever is done will be safe and valid. — Letter to the Smyrnaeans 8, J.R. Willis translation.

It is from the word katholikos ("according to the whole") that the word catholic comes. When Ignatius wrote the Letter to the Smyrnaeans in about the year 107 and used the word catholic, he used it as if it were a word already in use to describe the Church. This has led many scholars to conclude that the appellation Catholic Church with its ecclesial connotation may have been in use as early as the last quarter of the 1st century. On the Eucharist, he wrote in his letter to the Smyrnaeans:

Take note of those who hold heterodox opinions on the grace of Jesus Christ which has come to us, and see how contrary their opinions are to the mind of God ... They abstain from the Eucharist and from prayer because they do not confess that the Eucharist is the flesh of our Savior Jesus Christ, flesh which suffered for our sins and which that Father, in his goodness, raised up again. They who deny the gift of God are perishing in their disputes. — Letter to the Smyrnaeans 6:2–7:1

In his letter was addressed to the Christians of Rome, he entreats to do nothing to prevent his martyrdom.[9]

Epistles attributed to Saint Ignatius but of spurious origin include[21]