An auxiliary verb (abbreviated aux) is a verb that adds functional or grammatical meaning to the clause in which it appears, such as to express tense, aspect, modality, voice, emphasis, etc. Auxiliary verbs usually accompany a main verb. The main verb provides the main semantic content of the clause.[1] An example is the verb have in the sentence I have finished my dinner. Here, the main verb is finish, and the auxiliary have helps to express the perfect aspect. Some sentences contain a chain of two or more auxiliary verbs. Auxiliary verbs are also called helping verbs, helper verbs, or (verbal) auxiliaries.

Below are some sentences that contain representative auxiliary verbs from English, Spanish, German, and French, with the auxiliary verb marked in bold:

a. Do you want tea? – do is an auxiliary accompanying the main verb want, used here to form a question – see do-support.

b. He has given his all. – has is an auxiliary used in expressing the perfect aspect of give.

c. He cogido tu lápiz. – he is an auxiliary accompanying the main verb coger, used here to form a compound verb, the perfect present of the verb coger.[2]

That became many times said = 'That was said many times.'

e. Sie ist nach Hause gegangen. – ist 'is' is an auxiliary used with movement verbs to build the perfect tense/aspect in German.[4]

She is to home gone = 'She went home/She has gone home.'

f. J'ai vu le soleil. – ai 'have' is an auxiliary used to build the perfect tense/aspect in French.[5]

f. Nous sommes hébergés par un ami. – sommes 'are' is an auxiliary used to build the passive voice in French.[6]

We are hosted by a friend.

These auxiliaries help express a question, show tense/aspect, or form passive voice. Auxiliaries like these typically appear with a full verb that carries the main semantic content of the clause.

Traits of auxiliary verbs across languages

Widely acknowledged verbs that can serve as auxiliaries in English and many related languages are the equivalents of be to express passive voice, and have (and sometimes be) to express perfect aspect or past time reference.[8]

In some treatments, the copula be is classed as an auxiliary even though it does not "help" another verb, e.g.,

The bird is in the tree. – is serves as a copula with a predicative expression not containing any other verb.

Definitions of auxiliary verbs are not always consistent across languages, or even among authors discussing the same language. Modal verbs may or may not be classified as auxiliaries, depending on the language. In the case of English, verbs are often identified as auxiliaries based on their grammatical behavior, as described below. In some cases, verbs that function similarly to auxiliaries, but are not considered full members of that class (perhaps because they carry some independent lexical information), are called semi-auxiliaries. In French, for example, verbs such as devoir (have to), pouvoir (be able to), aller (be going to), vouloir (want), faire (make), and laisser (let), when used together with the infinitive of another verb, can be called semi-auxiliaries.[9]

The following sections consider auxiliary verbs in English. They list auxiliary verbs, then present the diagnostics that motivate this special class (subject-auxiliary inversion and negation with not). The modal verbs are included in this class, due to their behavior with respect to these diagnostics.

A list of verbs that (can) function as auxiliaries in English is as follows:[10]

The status of dare, need (not), and ought (to) is debatable.[11] and the use of these verbs as auxiliaries can vary across dialects of English. If the negative forms can't, don't, won't, etc. are viewed as separate verbs (and not as contractions), then the number of auxiliaries increases. The verbs do and have can also function as full verbs or as light verbs, which can be a source of confusion about their status. The modal verbs (can, could, may, might, must, shall, should, will, would, and dare, need and ought when included) form a subclass of auxiliary verbs. Modal verbs are defective insofar as they cannot be inflected, nor do they appear as gerunds, infinitives, or participles.

The following table summarizes the auxiliary verbs in standard English and the meaning contribution to the clauses in which they appear. Many auxiliary verbs are listed more than once in the table based upon discernible differences in use.

Deontic modality expresses an ability, necessity, or obligation that is associated with an agent subject. Epistemic modality expresses the speaker's assessment of reality or likelihood of reality. Distinguishing between the two types of modality can be difficult, since many sentences contain a modal verb that allows both interpretations.

The verbs listed in the previous section can be classified as auxiliaries based upon two diagnostics: they allow subject–auxiliary inversion (the type of inversion used to form questions etc.) and (equivalently) they can take not as a postdependent (a dependent that follows its head). The following examples illustrate the extent to which subject–auxiliary inversion can occur with an auxiliary verb but not with a full verb:[12]

a. He worked today.
b. *Worked he today? - Full verb worked does not allow subject–auxiliary inversion.

a. She can see it.
b. Can she see it? - Auxiliary verb can allows subject–auxiliary inversion.

a. She sees it.
b. *Sees she it? - Full verb sees does not allow subject–auxiliary inversion.

(The asterisk * is the means commonly used in linguistics to indicate that the example is grammatically unacceptable or that a particular construction has never been attested in use.) The following examples illustrate that the negation not can appear as a postdependent of a finite auxiliary verb, but not as a postdependent of a finite full verb:[13]

a. Sam would try that.
b. Sam would not try that. - The negation not appears as a postdependent of the finite auxiliary would.

a. Sam tried that.
b. *Sam tried not that. - The negation not cannot appear as a postdependent of the finite full verb tried.

a. Tom could help.
b. Tom could not help. - The negation not appears as a postdependent of the finite auxiliary could.

a. Tom helped.
b. *Tom helped not. - The negation not cannot appear as a postdependent of the finite full verb helped.

Some syntacticians distinguish between auxiliary verbs and light verbs.[15][16] The two are similar insofar as both verb types contribute mainly just functional information to the clauses in which they appear. Hence both do not qualify as separate predicates, but rather they form part of a predicate with another expression - usually with a full verb in the case of auxiliary verbs and usually with a noun in the case of light verbs.

a. They had a long meeting.

b. *Had they a long meeting? - Light verb had fails the inversion test.

c. *They had not a long meeting. - Light verb had fails the negation test.

a. She did a report on pandering politicians.

b. *Did she a report on pandering politicians? - Light verb did fails the inversion test.

c. *She did not a report on pandering politicians. - Light verb did fails the negation test.

(In some cases, though, have may undergo auxiliary-type inversion and negation even when it is not used as an auxiliary verb – see Subject–auxiliary inversion § Inversion with other types of verb.)

Sometimes the distinction between auxiliary verbs and light verbs is overlooked or confused. Certain verbs (e.g., used to, have to, etc.) may be judged as light verbs by some authors, but as auxiliaries by others.[17]

The paper will have been scrutinized by Fred.

The auxiliary verbs are in bold and the main verb is underlined. Together these verbs form a verb catena (chain of verbs), i.e., they are linked together in the hierarchy of structure and thus form a single syntactic unit. The main verb scrutinized provides the semantic core of sentence meaning, whereby each of the auxiliary verbs contributes some functional meaning. A single finite clause can contain more than three auxiliary verbs, e.g.

Fred may be being judged to have been deceived by the explanation.

Viewing this sentence as consisting of a single finite clause, there are five auxiliary verbs and two main verbs present. From the point of view of predicates, each of the main verbs constitutes the core of a predicate, and the auxiliary verbs contribute functional meaning to these predicates. These verb catenae are periphrastic forms of English, English being a relatively analytic language. Other languages, such as Latin, are synthetic, which means they tend to express functional meaning with affixes, not with auxiliary verbs.

The periphrastic verb combinations in the example just given are represented now using the dependency grammar tree of the sentence; the verb catena is in green:[19] 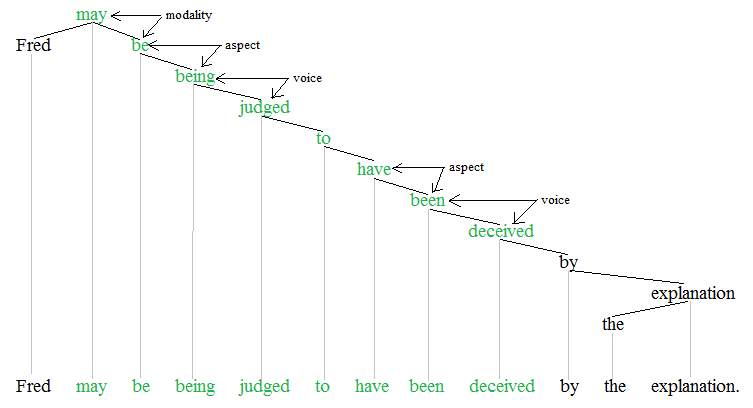