Presidente Hayes (Spanish pronunciation: [pɾesiˈðente ˈaʝes]) is a department in Paraguay. The capital is the city of Villa Hayes. The department was named after U.S. President Rutherford B. Hayes, who awarded the territory to Paraguay as the arbitrator in a boundary dispute between Paraguay and Argentina after the Paraguayan War.

The department is divided into eight districts: 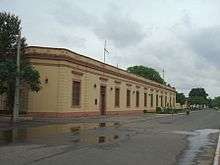 Government of Presidente Hayes near the Paraguay river 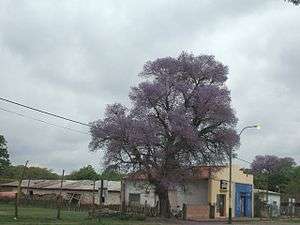 A street of Benjamín Aceval

In the colonial period, conflicts between settlers and native tribes resulted in the abandonment of towns and missions including Melodía, Timbó, Naranajay and Remolinos.

Only Fort Borbon, today called Fort Olimpo, survived. Founded during the government of Joaquín Alós y Brú, the garrison contained the southern advance of the Portuguese.

French settlers tried but failed to settle the area, with the exception of Villa Occidental.

The area received the name "Presidente Hayes" after the War against the Triple Alliance of 1864-1870, in honor of the United States president Rutherford B. Hayes, who in the arbitration between Argentina and Paraguay awarded the territory to the latter in 1878.

In 1906, during the political division of Paraguay, it was split in two regions, Oriental and Occidental. The latter was divided in military headquarters that depended on the War and Marine Ministry.

The temperature reaches 44 °C in summer and drops to 0 °C in winter, the average temperature is 26 °C. The average amount of precipitation is about 900 and 1200 millimeters annually.

The type of soil can be classified in two kinds: to the east, saline soil, to the south, to Pilcomayo River, calcareous soil, to the Paraguay River.

The hills Confuso, Siete Cabezas and Galván are small elevations.

The Paraguay River forms one border of the department. The tributary rivers Pilcomayo, San Carlos, Siete Puntas, Negro, Verde, Montelindo, Aguaray Guazú and Confuso also flow through the department but are not navigable for big ships. To the south lies the Patiño Swamp.

Tinfunqué National Park is a major tourist attraction. It has an area of 280,000 hectares.

The city of Villa Hayes floods frequently when the rivers overflow. The land elsewhere in the department is higher. 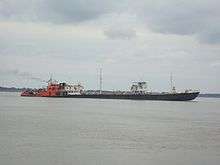 The deviation of the Pilcomayo River towards Argentina has produced several changes in the habits of the people; the drought causes the migration of the jacarés to most humid areas, and also the spreading of diseases.

The population is heavily involved in agriculture; the department is third place in production of sorghum. Cotton and sweet cane are also agricultural products of the area.

Villa Hayes and Benjamín Aceval are also noticeable for the production of sweet cane.

In Villa Hayes are the sugar factory Censi and Pirota. Sawmills, ceramic factories and steel mills are also in the city. ACEPAR, Aceros del Paraguay, is an important iron and steel industry and is also located in Villa Hayes.

In addition, in Villa Hayes is Astillero Chaco Paraguayo S.A., a specialising in the construction of launches for heavy loads, fuel and vegetable oil transportation. There is also soap and lime factories and an ESSO plant of fuel and lubricants.

Puerto Falcón is an area of very intense economic trading with Argentina and has heavy tourism. 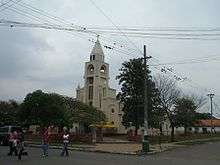 The church of Villa Hayes

The most important way of transportation is Route No. 9 "Carlos Antonio López" also known as "Transchaco", which cross the Paraguay River through the Remanso Bridge and extends to Bolivia.

The Route No. 12 "Vice Presidente Sánchez" borders Pilcomayo River, but is not passable when raining.

The different roads that connect portions of the department have the inconvenience of being impassable during the rainy season.

Paraguay River is the most used way to communicate with Puerto Pinasco.

In Puerto Falcón, is possible the communication with the Argentine city Clorinda through the San Ignacio de Loyola International Bridge.

The cattle establishments use aerial ways.

The department has two radio stations in FM, Radio Villa Hayes and Dyon. About 3,200 people count with phone service.

There are 16,865 households in the department, 6,165 in the urban area and 10,700 in the rural area. The percentage of which count with basic facilities are the following:

The region has 96 institutions of elementary education, 192 of basic education and 29 of high school education.

There are 38 health establishments, counting hospital and health care centers.