Not to be confused with Taiwan or Taiwan Province.

Formosa Province (Spanish pronunciation: [forˈmosa]) is a province in northeastern Argentina, part of the Gran Chaco Region. Its northeast end touches Asunción, Paraguay, and borders the provinces of Chaco and Salta to its south and west, respectively. The capital is Formosa.

Part of it is the antipode to northern Taiwan, which was formerly known as "Formosa".[2] 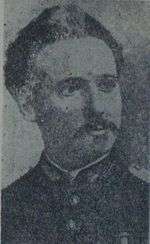 Commander Luis Jorge Fontana, founder of the city of Formosa and the territory's foremost early promoter.

Native inhabitants of these lands include the Pilagás, Wichis and Tobas, whose languages are still spoken in the province.

Sebastián Gaboto and Diego García first explored the area at the beginning of the 16th century trying to find a route from Viceroyalty of Peru to Asunción. Because the rivers Pilcomayo and Bermejo are so shallow, the attempts to set a route towards Asunción was abandoned.

The area's first European settlement, Concepción del Bermejo, was established in 1585. Following the establishment of Argentine and Paraguayan independence in the 1810s, the area fell under dispute between the two nations, a matter not settled until after the War of the Triple Alliance (1865–70). Commander Luis Jorge Fontana founded the settlement of Formosa in 1879, bringing the remote area into national attention and helping to secure a territorial status in 1884.

Formosa had less than 20,000 inhabitants in 1914; but in 1955, when it acquired the status of Province by decree of President Juan Domingo Perón, it had already more than 150,000. Following the Rincón Bomba massacre by white locals of nomadic Amerindians in 1947, President Perón initiated a program of land reform in the province; the program, by the time of his 1955 overthrow, had issued only around 4,000 land grants, however.[3] Continuing to grow slowly, though relatively steadily, the Formosa campus of the National University of the Northeast was established as the National University of Formosa in 1988. 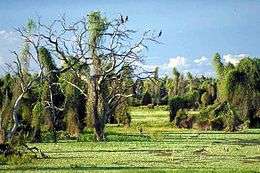 Located within the geographic coordinates 26° - 22°30' South, and 57°30' - 62°25' West, the plains run between rivers Bermejo and Pilcomayo with a slight inclination towards the Southeast. Due to this flatness, riverbeds are not stable, and small lagoons that are slowly reabsorbed arise.

The average annual temperature is 21 °C, and during the summer it can go up to 45 °C

The subtropical weather is characterized with uniform annual rains in the east (1000 mm annual), while in the rest of the country winter is a drier season (80 mm). The humidity variation results in the jungle vegetation on one side, and the Chaqueño forest in the other. The limit with the Salta Province is known as the Impenetrable ("Impenetrable").

The antipode relationship with Taiwan 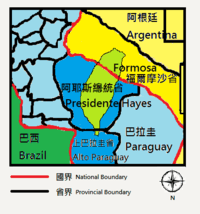 The antipode relationship between Formosa Province and Taiwan

Part of the province is the antipode to northern Taiwan, which was also known as "Formosa". 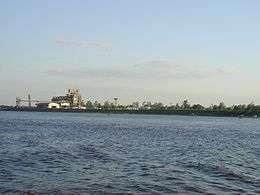 The Port of Formosa along the Paraguay River.

Remote and saddled by its inhospitable geography and climate, Formosa's economy has long been one of Argentina's poorest. Its economy in 2006 was estimated at US$2.082 billion, or, US$4,278 per capita.[4] Its economy is the third smallest and second least developed in Argentina yet has shared in Argentina's recovery since 2002 very well.[5]

Poorly industrialized, Formosa's economy is based on cattle and agricultural activities like cotton and fruit cultivation, these mostly centered in the Patino, Pilagás and Pilcomayo departments.

Cattle in Formosa exceed 1.5 million head and ranching has long been the agricultural mainstay of the province. Like elsewhere in Argentina, agriculture has long since been overtaken by other activities and amounts to about 10% of Formosa's output (somewhat more than average). 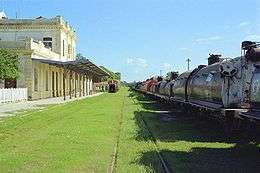 Freight rail station in the city of Formosa.

Cotton represents half of the agricultural wealth of the province followed by soybean (25,000 tons a year) and maize (55,000 tons), who have experienced a less dramatic invigoration after the 2001 crisis.

The production of bananas, mainly for domestic consumption, has a steady annual growing of 70,000 tons average. Citrus and juice production for exportation, specially grapefruit, is growing rapidly, with 1,200 planted hectares and an annual production of around 15,000 tons.

The province is divided into nine departments: