Prince Christian of Denmark (25 March 1675 – 27 June 1695) was the third son of Christian V of Denmark and his consort Queen Charlotte Amalie, and thus a younger brother of King Frederick IV. He died aged 20, and never married. 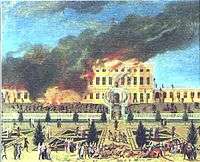 Sophie Amalienborg during the fire in 1689

At the age of 12 he was mentioned as a possible royal subject for Poland's throne. As a 14-year-old was in charge of the celebrations on the occasion of his father's birthday that brought probably the first opera in Denmark, which sadly ended with Amalienborg fire in 1689. Described as a strong and lively young man he took up his first major trip to Italy in May 1695, soon after he got infected by smallpox and died 27 June in Ulm. The body was taken to Roskilde, where interment took place 11 September of that year.