Prince Joachim was born on 7 June 1969 at Rigshospitalet, Copenhagen, and was christened on 15 July 1969 in Aarhus Cathedral, the first member of the royal family to have been christened outside of Copenhagen. His godparents were his maternal aunt, Princess Benedikte of Denmark; his paternal uncle, Jean Baptiste de Laborde de Monpezat; King Harald V of Norway; and Princess Christina of Sweden.

Prince Joachim attended school as a private pupil from 1974 until 1976 at Amalienborg Palace and then from 1976 until 1982 at Krebs' Skole in Copenhagen. In the period 1982–1983 the Prince studied as a boarder at École des Roches in Normandy (France). In 1986, Prince Joachim graduated from the Øregaard Gymnasium. In 1991–1993, he completed his studies in agrarian economics at Den Classenske Agerbrugskole Næsgaard. The Prince's first language is Danish, but he also speaks French, English and German.[1]

Prince Joachim began his military education in 1987 as a recruit in the Queen's Own Regiment. In 1988 the prince became a sergeant, and a year later, a lieutenant of the engineering. Prince Joachim served as a platoon commander of a tank squadron from 1989 to 1990. In 1990 the Prince gained the rank of first lieutenant of the reserve, and in 1992 he was appointed Captain of the reserve. After appointment to Major of the reserve in 2005, the Prince remains active in the defence reserve.

On 16 September 2004 the couple announced their separation, and divorced on 8 April 2005. Countess Alexandra of Frederiksborg subsequently married again and lost the title Princess of Denmark. She continues to live and work in Denmark and the couple share joint custody of their sons.

On 3 October 2007 the Danish Royal Court announced that Prince Joachim had become engaged to Marie Cavallier, now Princess Marie of Denmark. The wedding took place on 24 May 2008 in Møgeltønder Church – in which the christening of Prince Felix had taken place – near Schackenborg Manor. The wedding date marked the 73rd anniversary of the wedding of Joachim's grandparents, King Frederick IX and Ingrid of Sweden.[2] The couple have two children:

None of his children is styled as a Royal Highness per the Danish Royal Court. All children hold the additional style of their father as Count/Countess of Monpezat in France.

Joachim is styled as "His Royal Highness Prince Joachim of Denmark, Count of Monpezat". He has been Prince of Denmark since birth and Count of Monpezat since 29 April 2008, when Queen Margrethe granted the title to her male-line descendants.[5] 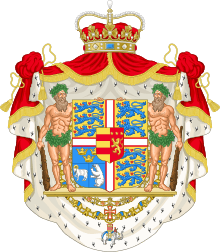 Coat of arms of Prince Joachim

See also : List of honours of the Danish Royal Family by country

The Dansk Rugby Union (DRU) website names Prince Joachim as the patron of the DRU.[13] He participated in a classic-car race, part of the GTC-TC championship: he drove a BMW 2002, sharing the ride with Derek Bell.[14]