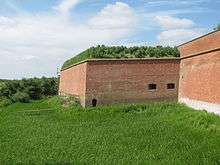 A sally port in the flank of a bastion at Dömitz Fortress in Mecklenburg-Vorpommern, Germany. 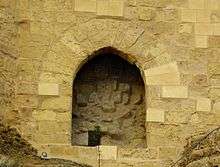 A blocked-up medieval sally port at the Cittadella in Gozo, Malta.

A sally port is a secure, controlled entryway to a fortification or prison. The entrance is usually protected by some means, such as a fixed wall on the outside, parallel to the door—which must be circumvented to enter and prevents direct enemy fire from a distance. It may include two sets of doors that can be barred independently to further delay enemy penetration.

From around 1600 to 1900, a sally port was a sort of dock where boats picked up or dropped off ship crews from vessels anchored offshore. That meaning occasionally still occurs, especially in coastal Great Britain. 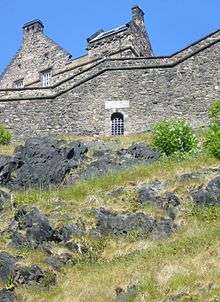 The Old West Sally Port at Edinburgh Castle in Scotland.

The word port is ultimately from Latin porta for door. Often the term postern is used synonymously. It can also mean an underground tunnel, or passage (i.e., a secret exit for those besieged).

A sally, ultimately derived from Latin salīre (to jump), or "Salle" sortie, is a military maneuver, typically during a siege, made by a defending force to harass isolated or vulnerable attackers before retreating to their defenses. Sallies are a common way for besieged forces to reduce the strength and preparedness of a besieging army; a sally port is therefore essentially a door in a castle or city wall, that allows troops to make sallies without compromising the defensive strength of fortifications.[1]

Targets for these raids included tools, which defenders could capture and use—and labor-intensive enemy works and equipment, such as trenches, mines, siege engines, and siege towers. Sometimes the defenders also attacked enemy laborers, and stole or destroyed the besiegers' beer and food supplies.

An extract from a nineteenth century dictionary of military terms describes a sally port thus:

"... those underground passages, which lead from the inner to the outward works ; such as from the higher flank to the lower, to the tenailles, or the communication from the middle of the curtain to the ravelin. When they are constructed for the passage of men only, they are made with steps at the entrance, and outlet. They are about six feet wide, and 8 1/2 feet high. There is also a gutter or shore made under the sally-ports that are in the middle of the curtains, in order that the water which runs down the streets may pass into the ditch ; but this can only be done when they are wet ditches. When sally-ports serve.to carry guns through them for the out-works, instead of making them with steps, they must have a gradual slope, and be eight feet wide."[2]

A guard in a protected location (usually physically remote) controls the doors and the middle space between them, and operates the doors remotely. This provides control over movement of people, materials, and vehicles through the sally port. The sally port guard typically verifies that:

Sally ports must be used with caution, and transit through them must be carefully monitored during any emergency or non-routine movements. The greatest safety hazard in use of these passageways is the danger of overcrowding the middle space between the doors. Since either door can only be opened while the other is closed and locked, overcrowding may occur in the middle space if too many try to enter at once.

Once the middle space is overcrowded, it may be impossible to properly close and lock the first door, thereby also making it impossible to open the second door, which of course is the only way by which people, vehicles or materials can successfully exit the controlled area. Even when the sally port has overrides installed within the door controls and locking apparatus, the size of the middle space and the physical dimensions and layout of the door openings hamper quick egress of a controlled space through a sally port-type opening.

Because of this danger, controlled spaces protected by sally ports usually have multiple sally port openings—safety zones within the controlled space—and formal and routinely practiced procedures for evacuating the middle area. Sally ports can also restrict the flow of people to one at a time, so that intruders cannot pass into a classified or secure area by closely following a cleared person.

Vehicular sally ports, such as are employed at military installations, prisons, and some airports, are similar to personnel sally ports, but have a large middle space to control incoming and outgoing vehicles and personnel. Typically, personnel in the vehicles step out while guards inspect the vehicles. A guard who finds something in the middle space that is unauthorized can lock down both doors, trapping the unauthorized entity inside.

In modern court buildings, a sally port secures the prisoners in a holding area or brings them directly from the jail area separating them from the court, with entry through the sally port controlled by the bailiff.

In "supermax" correctional facilities, groups of inmate cells may be connected to central corridors via sally ports. An officer behind protective glass opens the port doors individually after verifying that the person is allowed to pass.

Police departments may have an enclosed garage or other access point at a private door that leads to their building, so that an arrested person cannot escape during transfer between a patrol car and a holding cell.[3]

A sally port appears on the Coat of Arms of the Republic of Malta.