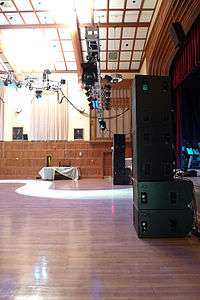 This photo illustrates some of the professional sound reinforcement system equipment which is sold or rented at pro audio stores. Each stack of speakers in this setup consists of two EAW SB1000 slanted baffle subwoofers (each contains two 18" drivers) and two EAW KF850 full-range cabinets for the mid and high frequencies.

Professional audio stores are also called "pro audio stores", "pro sound stores", "sound reinforcement" companies, "PA system companies" or "audio-visual companies", with the latter name being used when a store supplies a significant amount of video equipment for events, such as video projectors and screens. Stores often use the word "professional" in their name or the description of their store, to differentiate their stores from consumer electronics stores, which sell consumer-grade loudspeakers, home cinema equipment, and amplifiers, which are designed for private, in-home use. 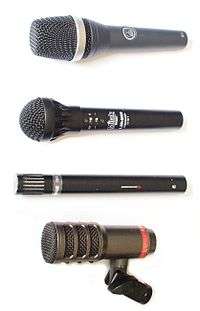 Pro audio stores carry a range of microphones that can be used for different live sound and recording applications.

While some pro audio stores only sell audio equipment, others also sell products in other categories that are used in rock concerts and DJ events, such as portable stages, stage lights, par cans and light stands. Some stores sell coloured lights, lasers and strobe lights which flash, change colours and/or move according to the beat of the music; these lights are used in nightclubs and rave dance events. Some stores also sell fog machines, which are used in dances, concerts and theatre productions, often to enhance the appearance of the lighting and laser effects. Some pro audio stores sell a range of DJ equipment, such as direct drive turntables, record cartridges and styli, DJ CD players and DJ mixers.