Home cinema, also commonly called home theater or home theatre, refers to home entertainment systems that seek to reproduce a movie theater experience and mood using video and audio equipment in or outside a private home. As of 2015, system users typically use a large projected image from a video projector or a large flat-screen high-resolution HDTV system, a movie or other video content on a DVD or high-resolution Blu-ray disc, which is played on a DVD player or Blu-ray player, with the audio augmented with five or more surround sound speakers and at least one low-frequency subwoofer.

In the 1950s, playing home movies became popular in the United States as Kodak 8 mm film projector equipment became more affordable. The development of multi-channel audio systems and later LaserDisc in the 1980s created a new paradigm for home video. In the early to mid-1990s, a typical home cinema in the United States would have a LaserDisc or VHS player fed to a large rear-projection television set. Some people were using expensive front projectors in a darkened viewing room.

Beginning in the late 1990s, and continuing throughout much of the 2000s, home-theater technology progressed with the development of the DVD-Video format, Dolby Digital 5.1-channel audio ("surround sound") speaker systems, and high-definition television (HDTV). In the 2010s, 3D television technology and Blu-ray Disc have ushered in a new era of home theater once again.

In the 2000s, the term "home cinema" encompasses a range of systems meant for movie playback at home. The most basic and economical system could be a DVD player, a standard definition (SD) large-screen television with at least a 27-inch (69 cm) diagonal screen size, and a "home theater in a box" surround sound speaker system with a subwoofer. A more expensive home cinema set-up might include a Blu-ray disc player, home theater PC (HTPC) computer or digital media receiver streaming devices with a 10-foot user interface, a high-definition video projector and projection screen with over 100-inch (8.3 ft; 2.5 m) diagonal screen size, and a several-hundred-watt home theater receiver with five to eleven surround-sound speakers plus one or two powerful subwoofer(s). 3D-TV-enabled home theaters make use of 3D TV sets/projectors and Blu-ray 3D players in which the viewers wear 3D-glasses, enabling them to see 3D content.

Home theater designs and layouts are a personal choice, and the minimum set of requirements for a home theater are: a television set or video projector CRT (no new models sold in U.S.), LCD, Digital Light Processing (DLP), plasma display, organic light-emitting diode (OLED), Silicon X-tal Reflective Display (SXRD), Laser TV, rear-projection TV, video projector, Standard-definition television (SDTV), HDTV, or 3D-TV at least 27 inches (69 cm) measured diagonally, an AV receiver or pre-amplifier (surround processor) and amplifier combination capable of at least stereo sound but preferably 5.1 Channel Dolby Digital and DTS audio, and something that plays or broadcasts movies in at least stereo sound such as a VHS HI-FI VCR, LaserDisc player (no new stand-alone models of either are available; VHS VCRs are usually bundled in combo decks with DVD players), a DVD player, a Blu-ray disc player, cable or satellite receiver, video game console, etc. Finally a set of speakers, at least two, are needed but more common are anywhere from six to eight with a subwoofer for bass or low-frequency effects.[1]

The most-expensive home-theater set-ups, which can cost over $100,000 (US), have expensive digital projectors and projection screens, and maybe even custom-built screening rooms which include cinema-style chairs and audiophile-grade sound equipment designed to mimic (or sometimes even exceed) commercial theater performance.

Today, home cinema implies a real "cinema experience" and therefore a higher quality set of components than an average television with only built-in speakers provides. A typical home theater includes the following parts: 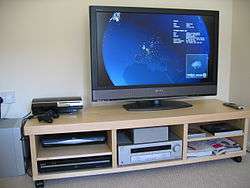 Basic home theater made up of a home entertainment system consisting of large-screen LCD television, a Sky+ HD satellite TV box, and a DVD player (and a Blu-ray Disc-capable PlayStation 3 game console). The comprising equipment are situated on/in a TV stand.

Home cinemas can either be set up by purchasing individual components or a HTIB (Home Theater in a Box) which includes all of the pieces from a single manufacturer. The benefit of component purchasing is that one can attain improved quality in video or audio with proper knowledge and research. For instance, some speakers perform better in smaller rooms while others perform better in larger rooms and seating location must be considered. One of the challenges with buying all the components separately is that the purchaser must understand speaker impedance, power handling, and HDMI compatibility. Given these challenges, HTIB systems are a simpler and more cost-effective solution for many families. 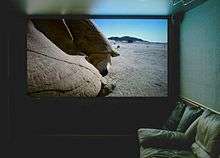 A large projection screen in a media room.

This example is of home theater screening room with video projector mounted in a box on the ceiling. Built-in shelves provide a place for movie decor, DVDs, and equipment. Note the component stack on the right, where the audio receiver, DVD player, secondary monitor, and video game system are located.

Some home cinema enthusiasts go so far as to build a dedicated room in the home for the theater. These more advanced installations often include sophisticated acoustic design elements, including "room-in-a-room" construction that isolates sound and provides the potential for a nearly ideal listening environment. These installations are often designated as "screening rooms" to differentiate from simpler installations.

This idea can go as far as completely recreating an actual small-scale cinema, with a projector enclosed in its own projection booth, specialized furniture, curtains in front of the projection screen, movie posters, or a popcorn or vending machine with snack food and confectionery. More commonly, real dedicated home theaters pursue this to a lesser degree. Presently the days of the $100,000 and over home theater is being usurped by the rapid advances in digital audio and video technologies, which has spurred a rapid drop in prices, making a home cinema set-up more affordable today than ever before. This in turn has brought the true digital home theater experience to the doorsteps of the do-it-yourself people, often for much less than the price of a low-budget economy car. Current consumer level A/V equipment can meet and often exceed in performance the expected experience at a modern commercial theater.

Home theater seating consists of chairs specifically engineered and designed for viewing movies in a personal home theater setting. Most home theater seats have a cup holder built into the chairs' armrests and a shared armrest between each seat. Some seating has movie-theater-style chairs like those seen in a movie cinema, which feature a flip-up seat cushion. Other seating systems have plush leather reclining lounger types, with flip-out footrests. Available features include storage compartments, snack trays, tactile transducers for low-frequency effects, and electric motors to adjust the chair. Home theater seating tends to be more comfortable than seats in a public cinema.[3]

In places that have the proper outdoor atmosphere, it is possible for people to set up a home theater in their backyard. Depending on the space available, it may simply be a temporary version with foldable screen, a projector and couple of speakers, or a permanent fixture with huge screens and dedicated audio set-up poolside. Due to the outdoor nature, it is quite popular with BBQ parties and pool parties.

Some people have expanded the idea and constructed mobile drive-in theaters that can play movies in public open spaces. Usually, these require a powerful projector, a laptop or DVD player, outdoor speakers or an FM transmitter to broadcast the audio to other car radios.

In the 1950s, home movies became popular in the United States and elsewhere as Kodak 8 mm film (Pathé 9.5 mm in France) and camera and projector equipment became affordable. Projected with a small, portable movie projector onto a portable screen, often without sound, this system became the first practical home theater. They were generally used to show home movies of family travels and celebrations, but they also doubled as a means of showing some commercial films, or even private stag films. Dedicated home cinemas were called screening rooms at the time and were outfitted with 16 mm or even 35 mm projectors for showing commercial films. These were found almost exclusively in the homes of the very wealthy, especially those in the movie industry.

The development of multi-channel audio systems and LaserDisc in the 1980s added new dimensions for home cinema. The first-known home cinema system was designed, built and installed by Steve J. LaFontaine as a sales tool at Kirshmans furniture store in Metairie, Louisiana in 1974. He built a special sound room which incorporated the earliest quadraphonic audio systems, and he modified Sony Trinitron televisions for projecting the image. Many systems were sold in the New Orleans area in the ensuing years before the first public demonstration of this integration occurred in 1982 at the Summer Consumer Electronics Show in Chicago, Illinois. Peter Tribeman of NAD (U.S.) organized and presented a demonstration made possible by the collaborative effort of NAD, Proton, ADS, Lucasfilm and Dolby Labs, who contributed their technologies to demonstrate what a home cinema would "look and sound" like.

Over the course of three days, retailers, manufacturers, and members of the consumer electronics press were exposed to the first "home-like" experience of combining a high-quality video source with multi-channel surround sound. That one demonstration is credited with being the impetus for developing what is now a multibillion-dollar business.

In the early to mid-1990s, a typical home cinema would have a LaserDisc or VHS player fed to a large screen: rear projection for the more-affordable setups, and LCD or CRT front-projection in the more-elaborate systems. In the late 1990s, a new wave of home-cinema interest was sparked by the development of DVD-Video, Dolby Digital and DTS 5.1-channel audio, and high-quality front video projectors that provide a cinema experience at a price that rivals a big-screen HDTV.

A home cinema from the late 2000s, using a rear projection television.

In the 2000s, developments such as high-definition video, Blu-ray Disc (as well as the now-obsolete HD DVD format) and newer high-definition 3D display technologies enabled people to enjoy a cinematic feeling in their own home at a more-affordable price. Newer lossless audio from Dolby Digital Plus, Dolby TrueHD, DTS-HD High Resolution Audio and DTS-HD Master Audio and speaker systems with more audio channels (such as 6.1, 7.1, 9.1, 9.2, 10.2, and 22.2) were also introduced for a more-cinematic feeling.

By the mid-2010s, the Blu-ray Disc medium had become a very common home media standard, and online video streaming sources such as Netflix and YouTube were offering copious high definition content, including some 4K content. The first 4K Blu-ray discs were released in 2016. By this point, 4K TVs and computer monitors were rapidly declining in price and increasing in prevalence, despite a lack of native content. While many DSP systems existed, DTS-HD Master Audio remained the studio standard for lossless surround sound encoding on Blu-ray, with five or seven native discrete channels. Video projectors also continued to improve and decrease in price relative to performance.

Noise Criteria (NC) are noise-level guidelines applicable to cinema and home cinema. For this application, it is a measure of a room's ambient noise level at various frequencies. For example, in order for a theater to be THX certified, it must have an ambient sound level of NC-30 or less. This helps to retain the dynamic range of the system.[4] Some NC levels are:

Projectors used for home cinemas have a set of recommended criteria. Those criteria are: