A selection of electric guitars at Sam Ash music store in Hollywood, California.

A cymbal room in a music store.

A selection of electric basses at a music store in Louisville, Kentucky. 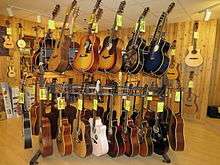 A selection of acoustic guitars at Cascio Interstate Music SuperStore.

General music stores may also sell brass instruments (e.g., trombone, trumpet, etc.), woodwind instruments (flute, clarinet, saxophone, etc.) and instruments from the violin family (violin, viola, cello and bass), but there is usually a smaller selection of these instruments, as compared with the guitar, bass and drum sections.

Some music stores also sell sheet music, including popular music, traditional music and Broadway songs, movie soundtrack scores, classical music pieces and instrument methods and studies ("etudes"). In the 2010s, some stores also sell instructional music DVDs and play-along CDs, which typically contain sheet music with the written melodies, which the performer can play or sing while a recording of each song or piece's accompaniment plays on a CD player.

Specialized music stores that sell only guitars, only basses or only drums are more likely to be found in major cities. Guitar and bass-focused stores typically sell instruments and the amplifiers and effects pedals used with these instruments. Near Orlando, Florida, there is a bass guitar specialty store. [2] Ottawa, the capital city of Canada, has a specialty music store that only sells drums and percussion equipment.[3]

Prior to the widespread availability of lightweight electronic clonewheel organs in the 1980s and 1990s that emulate the sound of a heavy, electromechanical Hammond organ, many cities had organ stores which sold large electric and electronic theatre organs and spinet organs made by Hammond, Lowrey and other manufacturers. These organs were sold for use in private homes and in churches; electric and electronic organs were popular for churches, because they cost significantly less than a pipe organ. 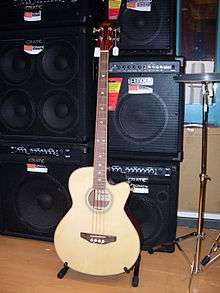 A music store display showing an acoustic bass guitar and a variety of bass "combo" amplifiers and speaker cabinets.

Some music stores sell used, vintage or collectible instruments and sound gear, often using a consignment model, in which the store only pays the seller for her instrument when it is sold. Even though there has been a major shift towards the use of electronic and digital instruments and sound gear in the 2000s, there is still a strong interest in vintage instruments amongst musicians who play blues, roots rock, Americana and indie rock. Vintage instruments that are sought out include 1950s and 1960s Hammond organs, Fender Bassman amps and electric guitars, 1970s Fender Rhodes electric pianos and old analog effects, such as 1970s and 1980s stompbox pedals. Stores that mostly sell used equipment may also sell some new merchandise, such as new guitar strings, patch cords and mic cables. Conversely, some stores that mostly sell new equipment may also sell some vintage, used equipment (typically a small number of high-priced collectible instruments).

In the 2000s, some music stores sell their instruments and sound gear through a website that contains digital photos of the equipment, which are grouped into categories (e.g., electric guitars, amplifiers, PA gear). Each photo of a product is accompanied by the name and model number of each item, a description of each product's features and the price. The sophistication of online music stores varies. Some online music stores have a single photo of the item, the product name and price, and a few bullets about the features. On the other hand, some online music stores have interactive Web 2.0 features, such as 360 degree virtual reality-style images of the products, in which the viewer can "turn" the product around to see the back and sides, online comments sections where customers can review their purchases and additional music-related content, such as articles on musical instruments or sound gear written by store staff. Patrons pay electronically at online music stores using a credit card, PayPal or other electronic payment systems. The goods are shipped through the mail or by express delivery companies such as FedEx. Some music stores sell their products solely online. In other cases, some stores operate both a "bricks and mortar" store (or chain) and an online store.